As you know, instead of the function keys above the keyboard for the MacBook Pro now placed a thin strip of display, which Apple called the Touch Bar. In fact, it overwrites the default system keys responsible for your screen brightness, control player and volume control – these buttons are now touch sensitive. The functionality is Touch Bar is much wider: each application has its own set of shortcut buttons to certain functions, while they themselves touch keys can be customized. The development team calling itself Diffractive — b3ll, failed to start on the OLED-panel, the classic shooter Doom. 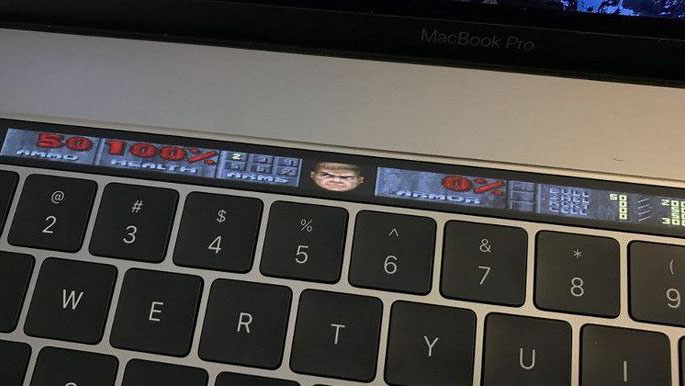 The legendary game was previously launched on iPod nano, Apple Watch and even on the calculator. Now enthusiasts have a new facility, which is in compulsory degree needed to port the game — Touch Bar new MacBook Pro.

On its website, Diffractive — b3ll have posted pictures and published a short video of the gameplay. As you can see, the mission was successful and in the list of platforms that are “suitable” for Doom, there was a replenishment.

Touchscreen laptop in this case acts as a screen, not a control. As you might guess, to play on the display with a resolution of 2170 x 60 pixels shooter very uncomfortable, but those who realized the project, it was important otherwise.

Doom was released in 1993. Since then, the market made a huge leap forward and now to play this project at the time required the-art “components”, if desired, can be almost anything that has a display.

Enthusiasts regularly experimenting with platforms that can be adapted Doom. In particular, in the summer of last year the Australian hackers launched shooter on the ATM screen.