Talk about how to develop the most advanced operating system in the world.

Demonstrating the first iPhone, Steve jobs called the device the competitors children. Apple, in turn, made the industry and showed how to be truly smart phone.

In the first version of iOS (then iPhone OS) had many advanced features and capabilities. But, if you look at them now, it seems that it’s not a smartphone, but just a toy.

Steve jobs always believed that the development software you need to start small and focus on the powerful Foundation for the introduction of new features in the future. The number of innovations has grown from year to year, making iOS the most advanced pocket computer. 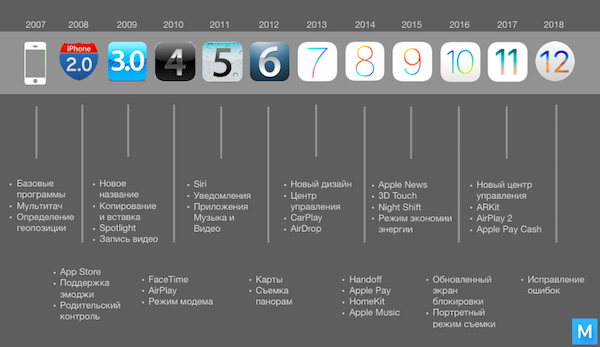 In this article we’ll look at the major changes that occurred with the operating system since its announcement in 2007.

The original iPhone OS was the fundamental achievement of Apple. The first smartphone of the Corporation worked on a modified version of OS X, and employees of the company had a very uneasy during its adaptation to the mobile processor and touchscreen.

Tearing the applause of the public, jobs for a long time flirted with her, talking about iPhone:

“Today we introduce you to three new devices. The first is a widescreen iPod with touch controls. The second is a revolutionary mobile phone. The third is an innovative Internet Communicator. So, three devices. A widescreen iPod with touch controls, a revolutionary mobile phone and a innovative Internet device. iPod, phone, and Internet Communicator. iPod, phone … You understand what I mean? Not three separate devices this is one device and we call it the … iPhone.” 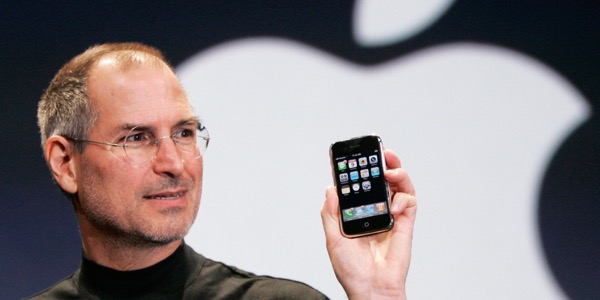 In the first version of the operating system were only a few applications. At the bottom non-editable dock were:

On a single, immutable desktop, you can see:

It looks funny now, but that’s all that was in the iPhone when it was first demonstrated by Steve jobs from the stage of MacWorld.

The former CEO was a supporter of the skeuomorph, so the iOS interface places resembled physical objects. For example, the notes were very similar to a real Notepad. However, other elements of the OS was copying something real, tangible, a weight. 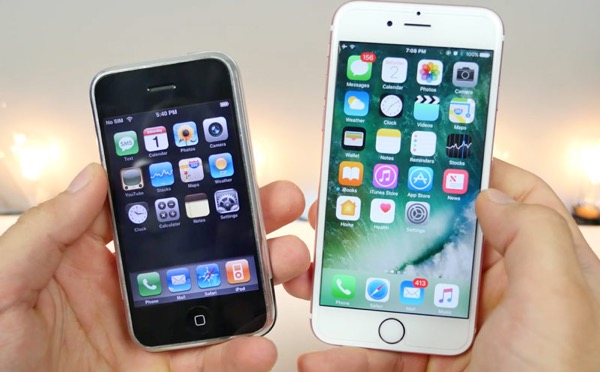 In iPhone OS there were many possibilities, glorified iPhone and familiar to the majority of users so far. The Slide to unlock gesture, the gesture of approaching the photos with two fingers (Pinch to zoom) and so on. It was missing a familiar and important elements. For example, MMS messages, search for contacts, the function of copy and paste. All this will only appear in future versions of the system. Also at that time there was no cloud iCloud so all your data on the smartphone is transferred via iTunes. All this started to change dramatically with the release of new iPhone models.

The main difference of the new operating system from the previous one is the emergence of the App store. Developers are given the tools to create their own programs running on the new Apple smartphone. At the time of launch in the App Store had only 500 apps. Today there are several million. By the way, this update was worth the 9 dollars for iPod touch users. IPhone owners can download it for free. 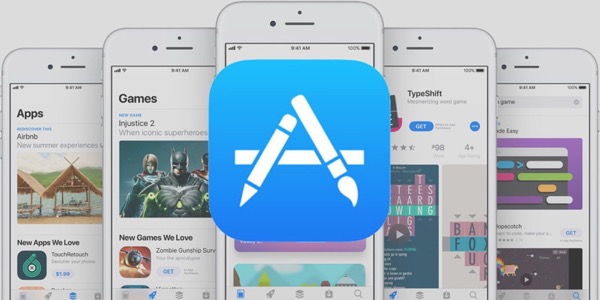 Also among the important new features are the following: 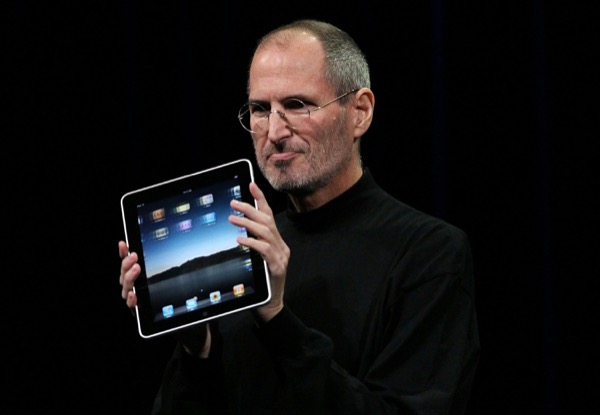 This update is particularly noteworthy. During the development of the third version of the mobile operating system Apple has released the iPad, after which the software platform was renamed to iOS. One of the key changes was the emergence of the ability to copy and paste text.

Also in the tablets and smartphones came a Spotlight search. The number of desktops was increased to 11. They accommodated up to 180 applications. In the smartphone Apple introduced support for MMS. The iPhone 3GS engineers of the Corporation have activated the auto focus when shooting video. 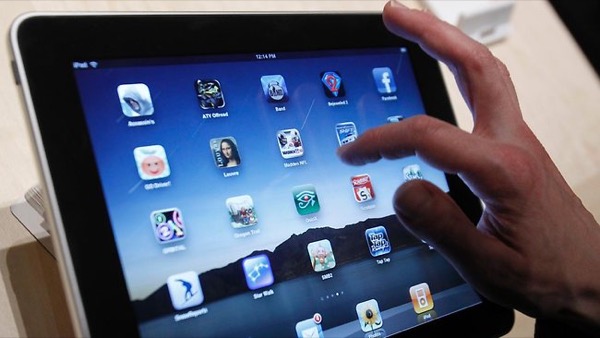 Card has got the support of step-by-step navigation to help navigate on the move, not tracking the route from beginning to end. iOS 3 was the first version of the system where it was possible to crop pictures.

With this release, Apple has started to produce a markedly truncated versions of iOS for older gadgets, as well as to abandon support for legacy devices. For example, with the release of iOS 4 lost the support of the first models of iPhone and iPod Touch.

In this version of the operating system finally began to emerge the first signs of multitasking. Have the opportunity to play in the background music, and quickly switch between last used apps.

Other important changes worth noting:

Slogan Ahead of time and not standing still

A key innovation was the appearance of the voice assistant Siri. Then the assistant was in beta status, but it imposed a lot of hope. Unfortunately, they were not destined to come true, and Siri has quickly become the most stupid and useless assistant of all. 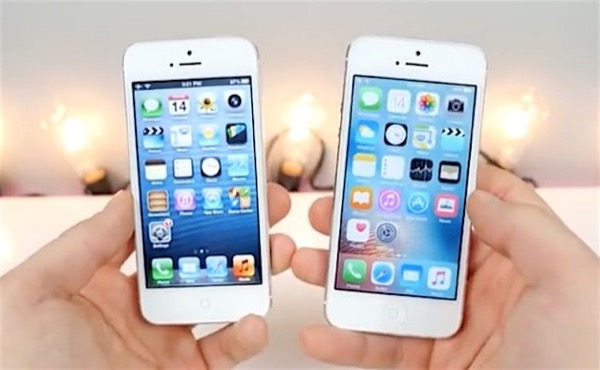 In the fifth revision of iOS has a notification Center copied from Android. Also there were buttons to quickly create posts on Twitter and Facebook. Decreased dependence iPhone, iPod and iPad from the computer. New firmware for the first time was made available for download over-the-air, bypassing iTunes.

One of the most boring and unsuccessful updates to Apple’s mobile platform. Sixth revision of iOS’s notorious for proprietary Maps app, which was designed to get rid of Google services. The product was of poor quality and even dangerous. Some users of the map service Apple plant in the jungle, of which it was difficult to get out. In this Chapter, the Corporation (at the time Tim cook) had to apologize. 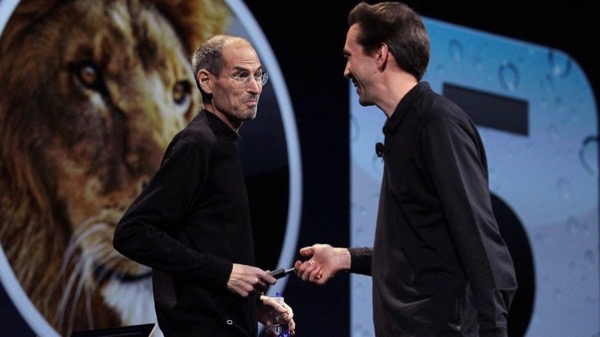 No significant changes are presented. Appeared the Passbook app (now Wallet), and Siri moved to tablets and players.

Slogan: the Mobile OS in a completely new perspective

The seventh-generation iPhone marked a new era of design. The plane and the abundance of white changed the skeuomorph and “tangibility”. Jony Ive has completely rethought the system and reworked everything to your taste. Many interface did not like. Besides, users terribly irritated by the abundance of new animations, which greatly reduced performance. 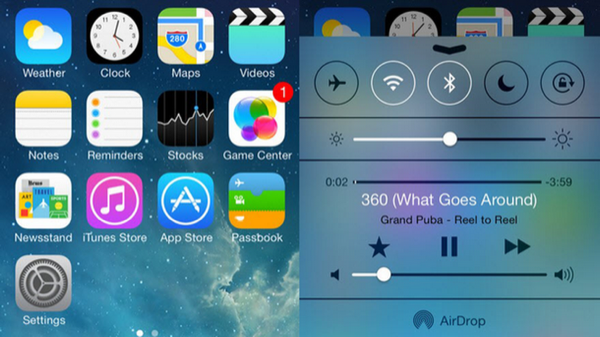 However, you cannot deny that in this version of the operating system, a host of very important changes that enhance the usability of the iPhone and iPad. Among them stands out:

And this is only part of all the changes introduced in iOS 7.

Slogan: Huge opportunities for developers. Even more for you

If the seventh version of iOS was a major cosmetic and functional upgrade for users, the eighth was a great release for developers. They have the ability to create extensions and widgets that enhance the functionality of their applications. Expansion was located in the menu “Share”, and widgets in notification Center.

There appeared a close relationship between all Apple devices due to Handoff and the ability to make calls/texting from your tablet and your computer without touching your smartphone. Also new services have earned the Corporation: Apple Pay and Apple Music. The company entered the market of streaming music and allowed the owners of the proprietary technology to use iPhone and Apple Watch as a wallet.

Apple has developed its own system of smart home control, opening of the producers of the respective equipment and specialized tools to integrate blinds and light bulbs with gadgets Corporation. In the eighth version of iOS there was a program “Health”, where you can store data on the physical condition of the user.

And even that’s not all. It is worth mentioning separately:

Slogan: the Most advanced mobile operating system. Now even more so

Massive update for the iPad, after which many haters of the tablet decided to pay attention to it due to the fact that it has full-fledged multitasking. The ability to run multiple programs at the same time significantly influenced the user experience, improving the performance of the owners of the gadget. 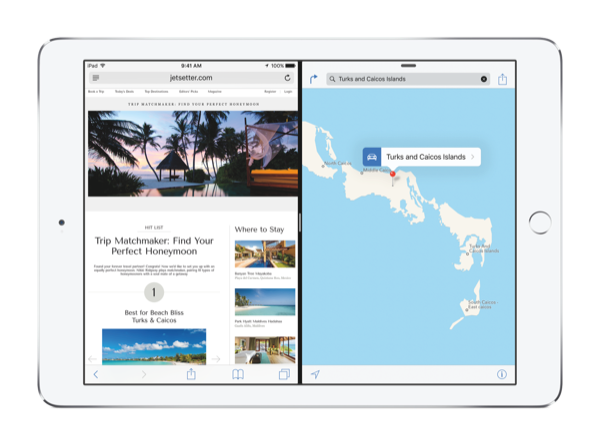 In addition to the ambiguity of the Apple iPad introduced many other less significant changes. For example, there was a News program that did not work in Russia. For the first time since the release of Apple’s iPhone in the Notes app. From this point they could draw. The new smartphones were activated, 3D Touch, and in later releases Apple has included Night Shift is a special mode of the display device to reduce eye strain.

It is also worth to highlight:

In the anniversary iOS has changed the design of the lock screen. Now it will display interactive notifications, when you swipe to the right invokes a screen with widgets. There appeared a possibility delete the standard apps (in fact they were just hiding). Completely changed the appearance of the application “Music” and “Maps”. The new smartphones also have the opportunity to shoot portraits. Well, the most important change to the App store with stickers for iMessage. 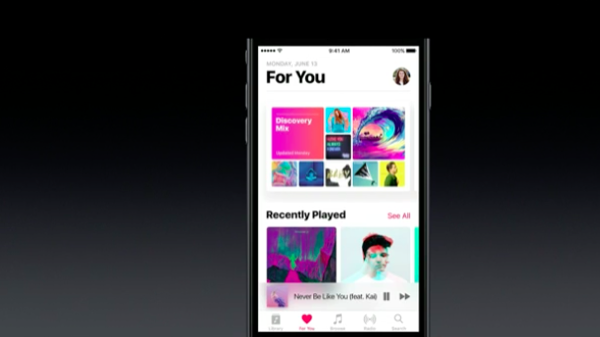 No other bright innovations in iOS 10 was not.

Slogan: a Big step for the iPhone. A giant leap for iPad

Currently latest iOS version. This update brings a huge number of new features for ordinary users and tools for developers. Apple completely changed the design of the app store. Introduced new rules to build the interface for third-party developers.

In the United States started sending money through the company messenger Corporation. Were significantly improved the function of creating screenshots. The system has an app “Files”, which became the analogue of the Finder in macOS.

Large-scale changes to the tablets. The iPad appeared in the dock with apps and new gestures to control programs in a multitasking mode. Besides, there appeared a possibility to move objects between applications on the computer.

Of course, the new operating system is almost unknown. According to rumors, this update will include only fixes to existing bugs. Probably, it will be like iOS 6, which heralded major changes in the system.