On Wednesday, the Network got photos of the packaging of the Apple smartphone new generation. And they confirm early rumors that the device will be called iPhone 6SE. Some thought these photos are fake, and even found evidence of the inept working of the software. Well, maybe so. But, it seems that the new flagship Apple will be called iPhone 6SE.

Speaking in favor of this appeared today photos of the smartphone-enabled screen and running the Geekbench benchmark, where in addition to the results of testing the novelty appears and its name is “iPhone 6 SE. The device runs on iOS 10, which gives the images even more credibility.

The decision to call a smartphone “iPhone 6SE” quite logical, given that the expected device, contrary to the usual strategy of Apple, will get a minor change in appearance, then the smartphones with a radical new design will appear only next year.

It is noteworthy that if the current flagship iPhone 6s gaining 2542 and 4427 points in the test mode, one core in multi-core mode, respectively, the result iPhone 6SE was significantly higher: single-chip platform Apple A10 has provided the increase in performance compared to the predecessor. In the single core test, the device scored 3042 points, in test mode all cores – 5210 points. 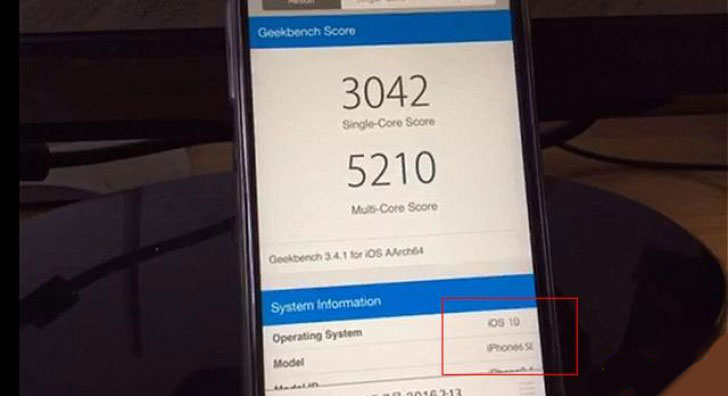 Simultaneously, the informants denied the leaks about the touch home button iPhone 6SE. It is argued that the prototype of the smartphone is still mounted mechanical button. In the gadget really used display technology, True Tone, but compared to last year’s iPhone 6s and 6s Plus, resolution, and screen sizes of the new generation iPhone remained unchanged.

According to sources, the 5.5-inch smartphone will be equipped with two main cameras with different focal lengths. Become known, and Apple plans to continue sales of the iPhone 6s even after the iPhone 6SE. However, their range will be limited to silver and gray colors, while the gold and rose gold will remain the prerogative of the new family.