7 reasons why Xiaomi Mi Air will never replace the MacBook

To date, Xiaomi has become a real concern, which produces not only smartphones, but also clothes, gyrometer and even washing machines. However, until recently, in its “Arsenal” was not laptops, which generated a lot of rumors about their imminent release. And here in the summer Xiaomi really showed the range Mi Notebook Air, which consists of two models: the first with a diagonal of 13.3 inches and younger with a 12.5-inch display. 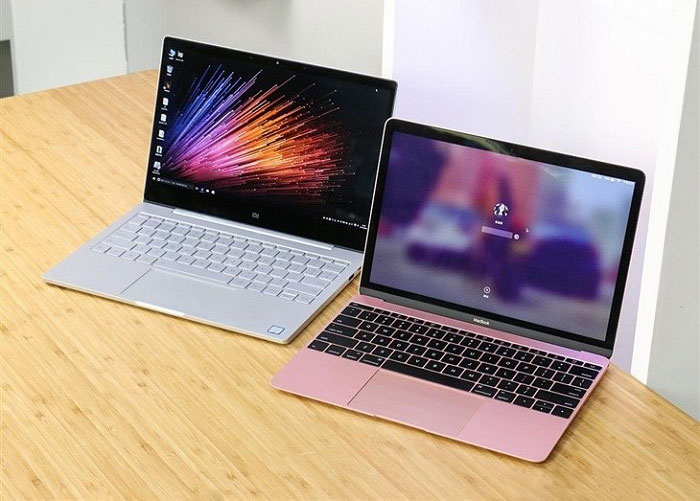 Model with a diagonal of 12.5 inches has got Intel Core M3 with integrated video card Intel HD Graphics, 4 GB RAM and SSD 128 GB. One USB connector and HDMI port, weighs the model of 1.07 kg.

If packing a 12.5 Air Mi Notebook can be compared with the MacBook, the laptop itself, to the credit of the designers of Xiaomi, it only resembles some design elements. Hull shape Mi Notebook Air more rectangular with only slightly rounded ends and sharp edges of the sidewalls. IXbt observers, comparing the device with a 12-inch MacBook, came to the conclusion that the new product is not able to replace a laptop running macOS, that would not say Xiaomi.

MacBook slightly smaller Junior model Xiaomi Mi Air. It can not be called an advantage or a disadvantage. While the MacBook is much thinner Xiaomi. It is evident in the large (rear) of the hull. And even more noticeably in the front of the case. From Xiaomi it is a little different in thickness from the rear, but the MacBook is very thin.

Before my eyes, of course, is almost there user comments, carry bags 17 inch gaming laptops, but… But believe me — if the MacBook in the backpack is almost not felt, Xiaomi is already noticeable. For this thickness comes at a price.

3. The MacBook is better keyboard

That MacBook less not affect the size of the keyboard and screen (almost) — the “Apple” much more subtle frame. Separately, we shall be astonished a strange decision with the grey keys on a grey background in Xiaomi — in dim lighting looks pretty slepenky. The backlight is also not much help, and sometimes it’s annoying, because it cannot be slightly damp. 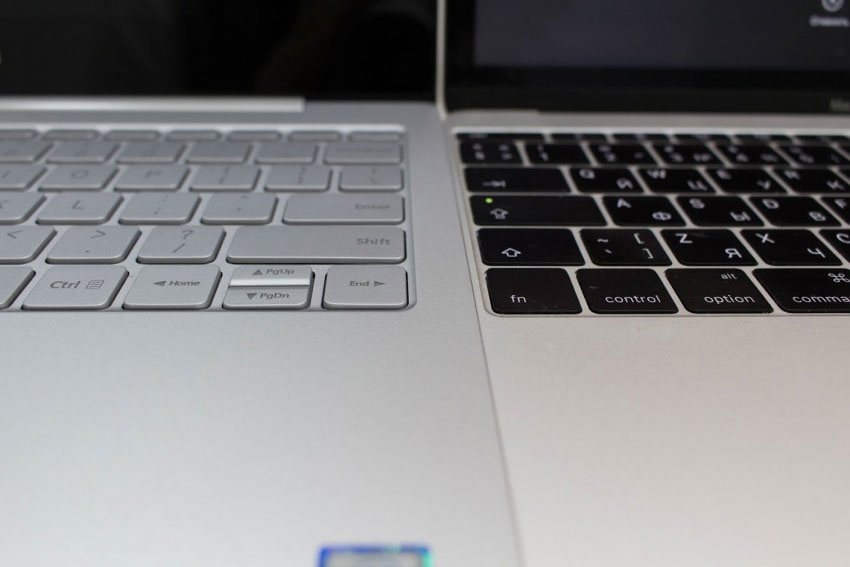 4. The MacBook is bigger and better touchpad

Touchpad laptops Xiaomi is not bad, however it is significantly less than the competitor. At the same trackpad on macOS supports a large set of multitouch gestures and Force Touch technology, than can not boast the model on Windows. 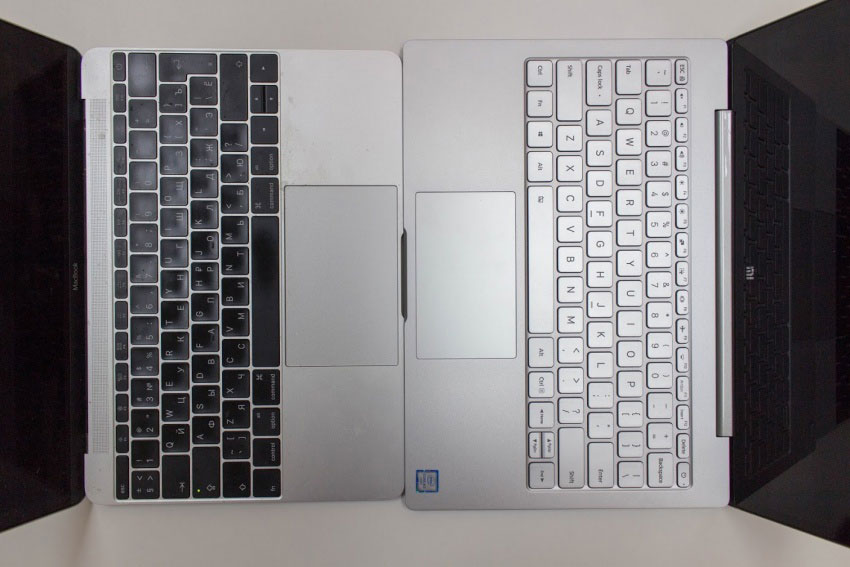 5. No holes in housing

Another plus of the MacBook is the lack of holes on the bottom cover. I recently remembered that I had spilled coffee on the table, on which stood a MacBook. The consequences were not, but what will happen with Xiaomi — is unclear. 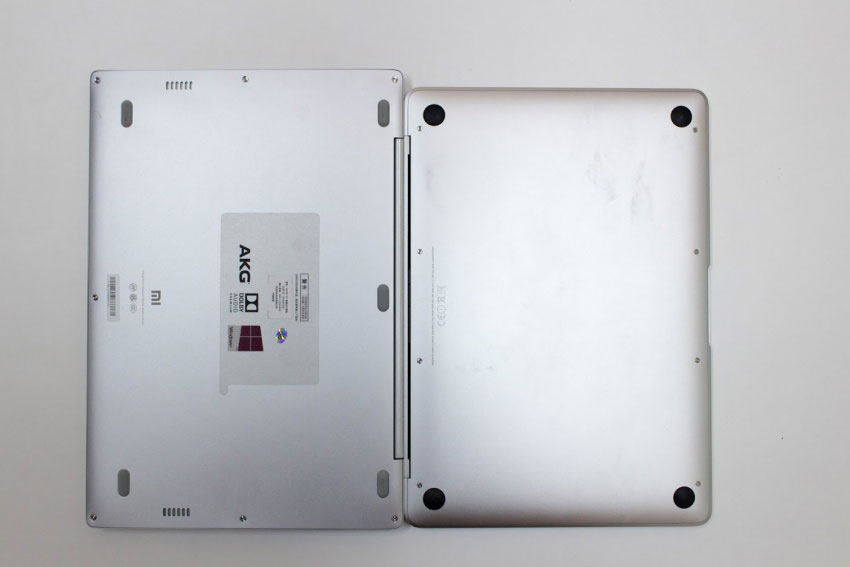 6. The MacBook is more compact adapter

Power adapter for the MacBook is smaller and more convenient than Xiaomi. While the first is charging charging from Xiaomi, and Xiaomi from epplovskoy — no. This is because the laptop can charge at 5 volts. 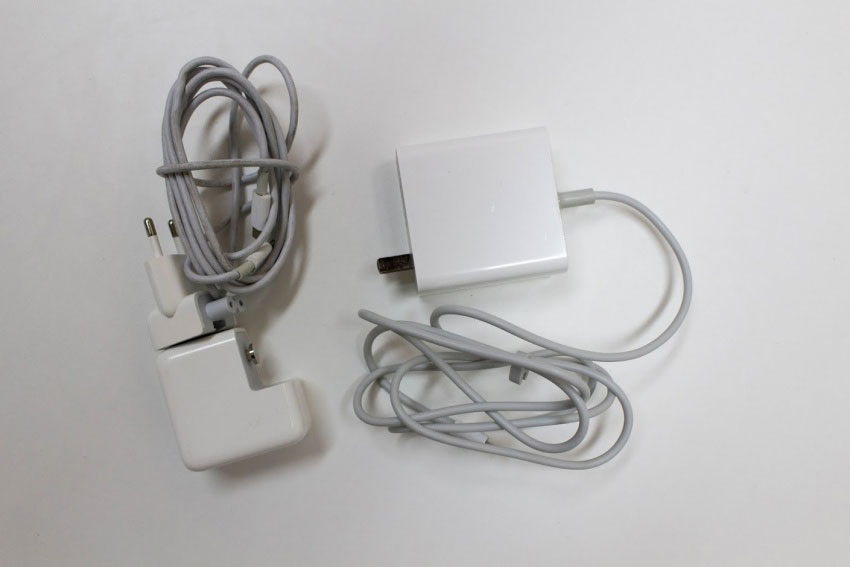 Laptops to a large extent choose for the operating system. No matter how hard Microsoft, its platform is far from what Apple offers. In the Windows ecosystem until there is no really adequate response to the 12-inch MacBook, which is the obvious advantages in thickness, weight, display high resolution and touchpad with tactile feedback and pressure sensitivity. And in conjunction with iPhone and iPad, Apple laptops represent the perfect solution for the modern user.