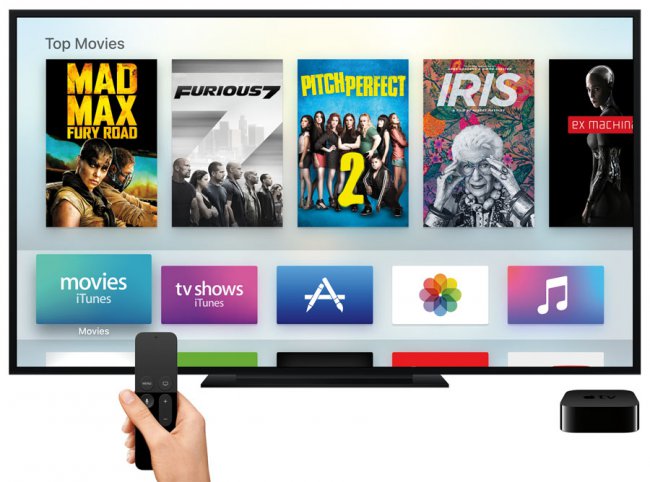 According to the statements of most observers, Apple TV 4 generation can be called the future of television. Despite some significant flaws, Apple media system turned out a very decent product that can be safely recommended to buy. We present to your attention 9 reasons to buy an Apple TV 4 generation.

The new operating system developed by Apple specifically for set-top box offers users many interesting possibilities. Now Apple TV is not just a repeater of movies and other videos from iTunes, now it is a complete media player. Streaming services, online broadcasting, satellite channels and, of course, games.

Design tvOS also was surprisingly slick and easy to use. No lags or crashes inherent to the latest versions of iOS, there is no trace. Everything just works as it was intended by the creators. The minimalistic interface is pleasing to the eye and not full of visual excess, and particular affection is called unobtrusive tips and 3D animation. Moreover, the system is built on exceptional intuitiveness, and therefore to deal with it will not be easy even new user.

In short, everything suggests that Apple TV running tvOS turned out to be really thoughtful and sophisticated device, unlike, say, iOS 9. Even a panel with integrated touch panel and the motion sensors turned out beautiful and provides some very useful features. For example, fast scrolling, or voice command in the format “rewind 10 seconds”. But the consoles are not finished. On and music services. Connect your favorite audio and enjoy high quality sound via any available service.

A great device for entertainment in the family circle

Perhaps the new Apple TV became one of the few devices, which can be enjoyed by the whole family. The older generation is more attracted by the abundance of video and logical location of all elements of the interface. Younger – no doubt – will please a huge number of games already available for download in the App Store. But be ready that will play not only children.

This is the best game console

Yes, I do not dissemble. Most adults will be happy to play casual titles, once available on devices running iOS. It is noteworthy that not everyone has the time to pass the storyline missions in games on Xbox or PlayStation, and Apple TV will make an excellent “ubivalki” time. Try Asphalt 8 or Mr. Jump on the big screen and your perception will change dramatically.

All the games available in the App Store, were not just ported, but actually redesigned to operate at tvOS and control remote Remote Siri and other MFI controllers. Another huge advantage of Apple TV as gaming console can be called the multiplayer modes. Compete with your friends or family, forgetting about singles.

Despite the extremely compact dimensions, the remote control for the Apple TV is a truly innovative device. The built-in accelerometer, gyroscope, microphone system and glass touch panel Remote Siri doing universal and very advanced gadget. You don’t have to spend extra money to buy a MFI controller, play with the remote, which will largely superior to competing solutions.

Also, thanks to the integrated trackpad, the controls and scrolling are much more convenient than before, and thus will bring you more fun from interaction with the console. For example, you can rewind the film at any stage, simply by swiping your finger on the touch panel. Even the presence of all six buttons on the remote control is not a disadvantage, because Apple has turned to squeeze out of them the entire functional maximum.

For many was a real shock equipping consoles with only two gradations of the volume of the storage 32 and 64 GB. Very sparsely for gaming console, you will agree? However, the reality is much better than you thought. New technologies of memory management and allow downloads not to download the whole app by downloading only that part which is necessary for a comfortable stay in the moment, gradually loading the necessary elements and getting rid of unnecessary. It is this justifies a restriction on the maximum weight programs in 200 MB. Even selecting a 32-Gigabyte model you will be able to fully enjoy all the features of the new consoles, not limiting themselves in the choice of applications. In addition, the tvOS will independently send to the cloud the data that you do not use, when needed providing instant access.

As mentioned above, all apps available for download in the App Store undergo a process of complete recycling and adapting it to the requirements of tvOS. Every game that you download will be perfectly displayed even on a 50-inch plasma. No ghosting or blurry pixel “ladders”. Apple cares about your comfort, presenting developers with high requirements.

Interest of developers to the platform

As shown, the users are very happy with the new features Apple TV, using all its features to the maximum. So, many console owners have replaced full-fledged gaming console in favor of what says a record number of downloads of games such as Alto”s Adventures, Battle Supremacy: Evolution and other. However, as we have already mentioned.

A complete product of “the same” Apple

Despite the existence of three different generations of Apple TV, only new model can be called really complete and worthwhile product. Previously you were only available for movies, Youtube, and different kinds of restrictions. Now everything has changed. Don’t believe? Check out our review.

Apple TV is a device with great potential and future-proofed. There is no doubt that very soon we will be available to new and even more interesting possibilities. For example, the prefix can be a great addition to developing the concept of “smart” house, and the upcoming system update will bring some additional — hopefully — revolutionary features.