This year the iPhone 2G was ten years old. Let us remember each presentation of Apple smartphones. 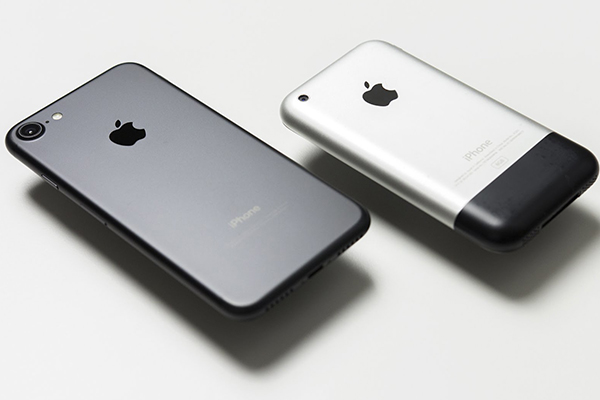 The first iPhone 2G was working on the iPhone OS. It was equipped with 17 applications and system updates were free, which set it apart from the iPod Touch, where the new system functions requested $ 20. The main differences became large display — 3.5 inches, capacitive. No stylus with the buttons — only control with your finger. Camera 2 MP, removable battery, the ability to choose a model with a memory of 4, 8 or 16 GB.

What was the most important, is the design, it was very good. Jobs has always attached importance to the details. How can you doubt the success of the first model, if a relatively large price of $ 500-600 for instance, Apple managed to sell about 7 million units and to reach a large market of mobile devices.

At WWDC 2008 introduced the iPhone 3G, which was deprived of hardware and software faults and worked on the new operating system iPhone OS 2.0. The mobile was cheaper than its predecessor and was sold in USA with contract operator. This, incidentally, was the first iPhone with a Russian localizaca. Was supports work in 3G networks, from which it gets its name.

One of the most important advances was the advent of the App Store with a bunch of programs that extend the capabilities of the device. To what extent increased sales? More than 5 times. Success is unconditional.

the iPhone 3GS is faster, because the “S” in the title meant the speed. Fans to play on the phone would just need to buy a new model, as updated stuffing began to resemble the hardware of the laptop — CPU Cortex-A8 with a frequency of 600 MHZ, 256 MB of RAM, separate graphics module PowerVR SGX 535. Smartphone became available in configurations of 8, 16 and 32 GB.

In iPhone OS 3.0 introduced a new function: copy and paste, send MMS, Spotlight, Speak Notes, Find my iPhone, the ability to download directly to the device television shows, music videos, movies and audiobooks, and more. Also in the system is multitasking, which meant the operation of various instant messengers, calculators, and other programs in the background.

2010 was a year of large-scale renovation. iPhone 4 presented a radical new design, but with preservation of distinctive features. Glass on both sides and metal frame. The new Retina display, A4 chip, 5 MP main camera and camera for video calls.

But the smartphone is lost, the network cost is wrong to take it in your hand, for which Apple later paid, paying compensation, giving free cases. But remember that this can not be done.

The new iOS — Yes, the presentation system we have grown accustomed now to all the name, a number of changes and improvements.

In October 2011, correcting important issues of the previous generation, Apple is releasing the iPhone 4S with iOS 5 and the next day after the presentation of the dying company founder Steve jobs.

The main feature of the model is the virtual assistant Siri. He helped to interact with the device and at the time had a fairly good functionality. The network problem also has been fixed. From that moment he began to produce models to 64GB.

The first iPhone presented without Steve — the iPhone 5. He became more. The display grew to 4″, which was the major innovation for all generations released to him. Another equally important innovation was the replacement of the old and familiar port 30-pin to Lightning. He was smaller than the previous connector and connect either side than not could boast of other standards, like Apple and competitors with microUSB.

In 2013, the world revealed the iPhone 5S, received the processor with the bit 64-bit, M7 motion coprocessor and fingerprint scanner Touch ID built into the Home button. There are new, Golden color of the device.

Together with a powerful left 5s and a cheaper 5C in the plastic housing of bright colors, but inside ustarevshih iPhone 5.

iOS7 was the biggest update of the system and was represented at this presentation. A new, simple and bright interface.

iPhone 6 also became a dramatic update to the series. Model with a screen diagonal of 4.7 inches and the Plus version with a 5.5 inch. The Plus version. Case not everyone liked it, but quickly got used to it. There was a modification with 128 GB of memory, a new processor Apple A8 and the coprocessor M8.

With this model the company problems have not escaped: the major was “easy” to bend the smartphone. For example, lay it in the back pocket of the jeans, you sit on it, and get already a bent piece of aluminum.

9 September 2015, has released iPhone 6s and 6s Plus. The new color is rose gold, which is then added all major products of the company. The screen recognizes the pressing force, the new aluminum alloy and slightly increased thickness solved the problem of deformation of the casing. Now bend the flagship on iOS is almost impossible.

The camera to take pictures with a resolution of 12 MP and learned to shoot 4K video. Touch ID is the second generation became namnoo faster. Enough to touch the button and the smartphone is unlocked.

In March 2016, fans of small displays “gave” iPhone SE — special edition. He did not differ in design from the iPhone 5 and 5s, but had the processor and camera from 6s. Only the front camera has retained a low resolution, prints have processed the Touch ID sensor of the first generation and the screen did not distinguish the effect of depression.

September 7, 2016 — presentation of the iPhone 7 and 7 Plus. Small changes in design and new colors — black and glossy black. The company decided to abandon the 3.5 mm headphone Jack for protection against dust and moisture.

iPhone 7 Plus has got 3 GB of RAM (the normal version 2), and a dual camera. Capture photos in the “Portrait” was the main feature of the smartphone.

September 12 will be presented the new smartphones. The iPhone 8 and 8 Plus will change slightly in appearance (but expect the new “iron”), and the iPhone Edition will be on display the entire front panel, dual camera and a compass.