Thursday, October 27, Apple introduced a new generation of laptops from a “professional” MacBook Pro. The event, which was long rumored, was held in the headquarters of Apple in Cupertino. 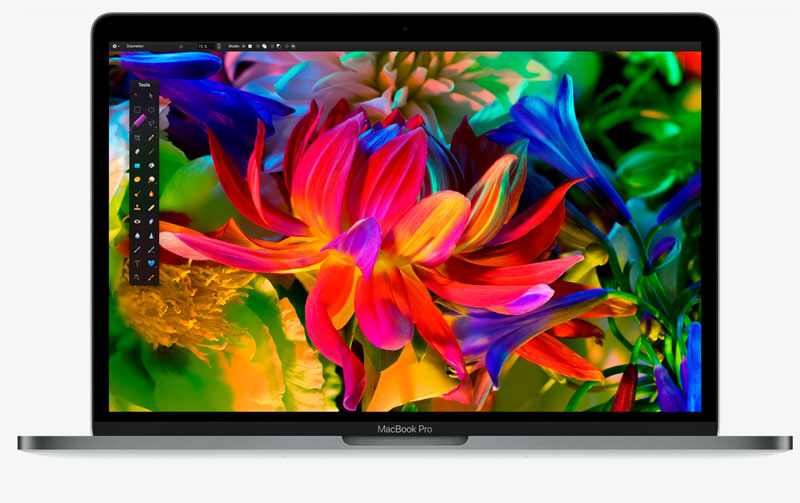 The new MacBook Pro has become the main product at the presentation of Apple. As expected, the computer is equipped with touch OLED panel located above the keyboard. Touchscreen laptop was given the name Touch Bar and replaced the top row of function keys F1-F12. 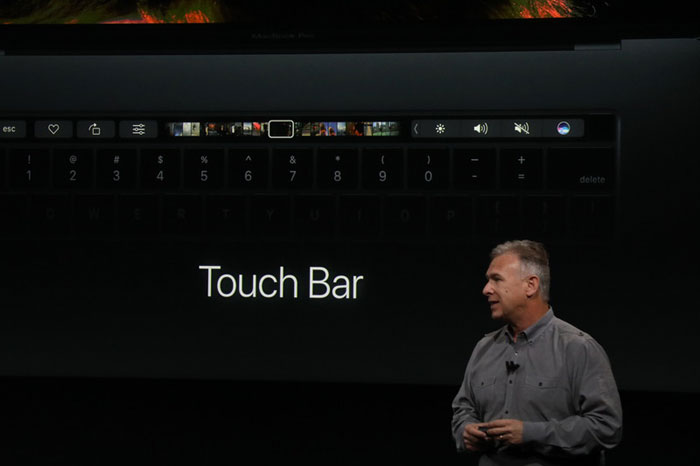 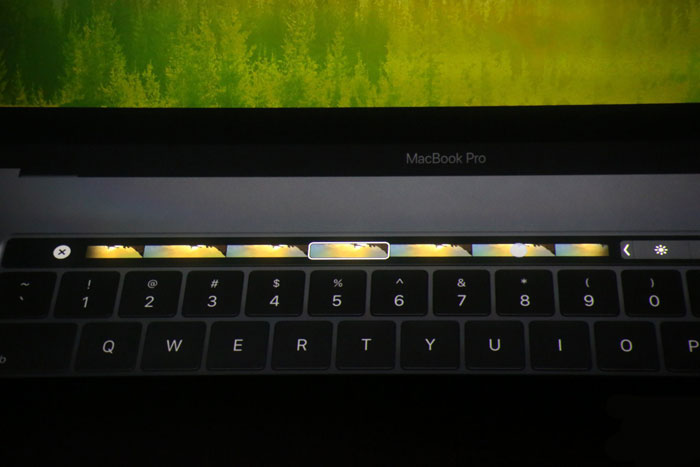 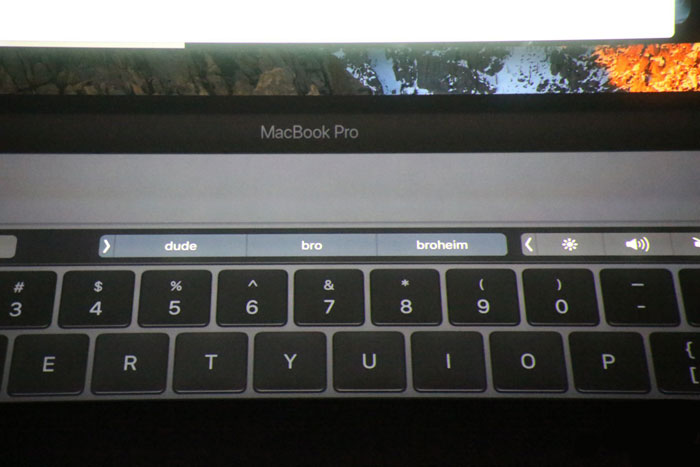 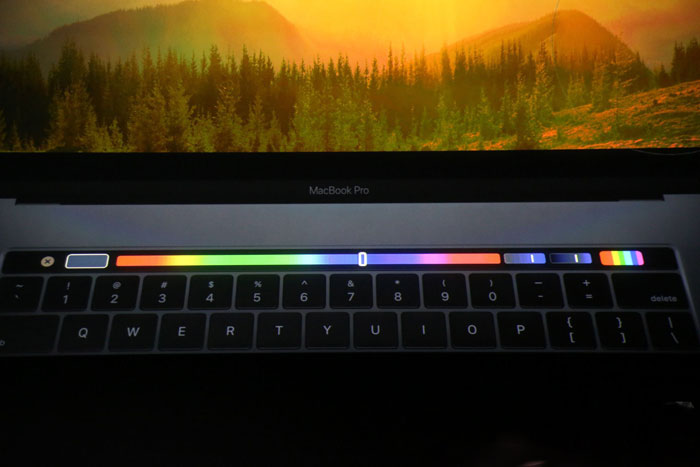 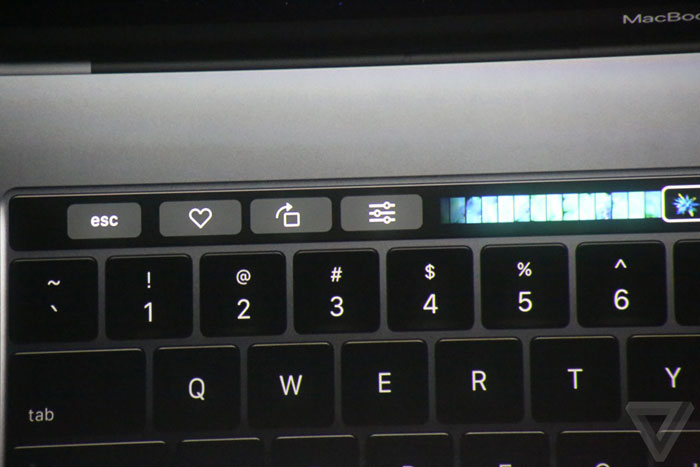 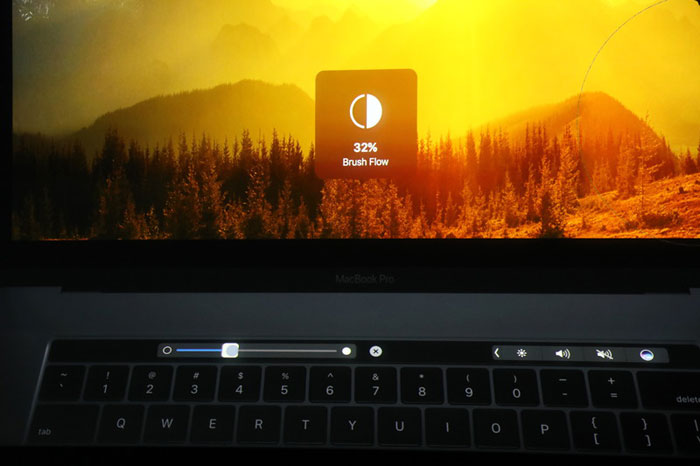 Of course, Apple wouldn’t be working on similar technology, only to abandon the mechanical keys in favor of touch. The most useful application Bar Touch will be the transfer of frequently used functions on mini-display. According to Apple’s statement, in many cases this is more convenient than the regular function keys. 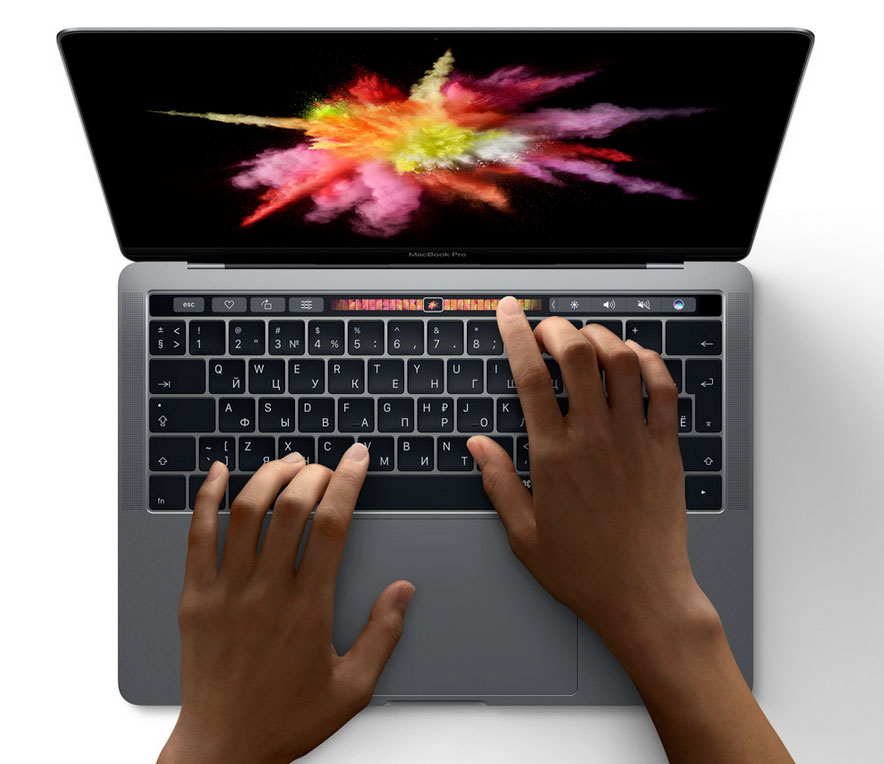 The touch panel can output useful commands for any applications. This can be music if you use iTunes frequently visited pages or navigation elements for Safari, a custom control panel for other programs like the Finder, LogicPro and Pages. 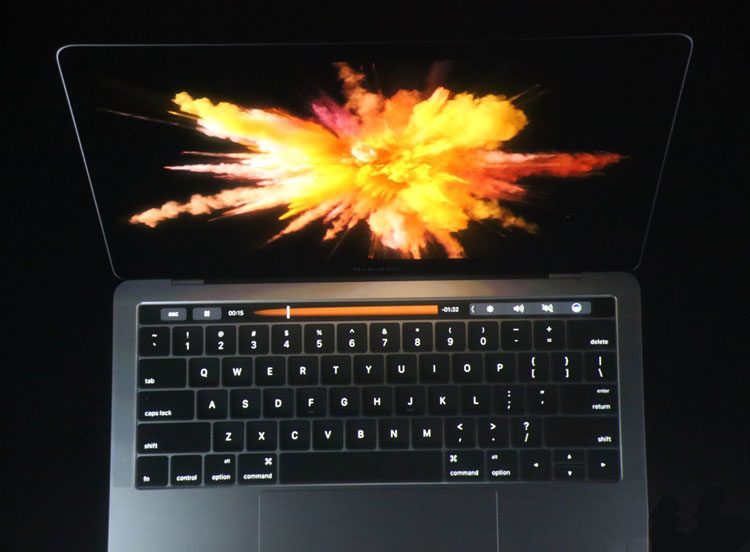 As noted in the Apple, the second display MacBook Pro allows you to speed up any action. In messenger and mail running, predictive, allowing you to quickly type messages and use emoticons. This functionality is already offering a keyboard to your iPhone and iPad. 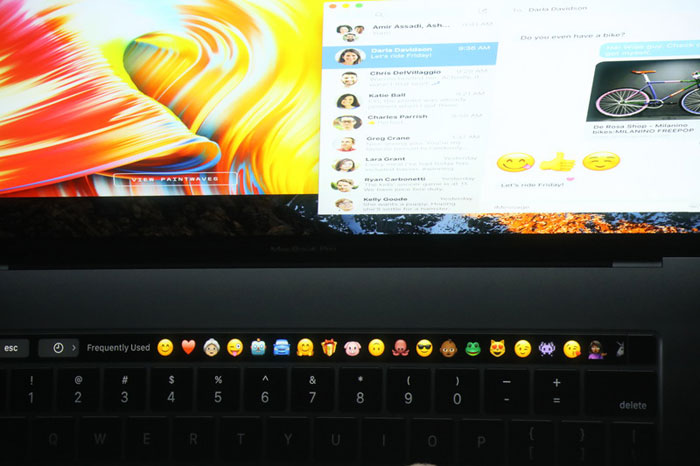 Touch Bar synchronized with all the native apps in macOS – from GarageBand to the terminal. Panel setup is done by a simple transfer buttons by analogy with the Finder. 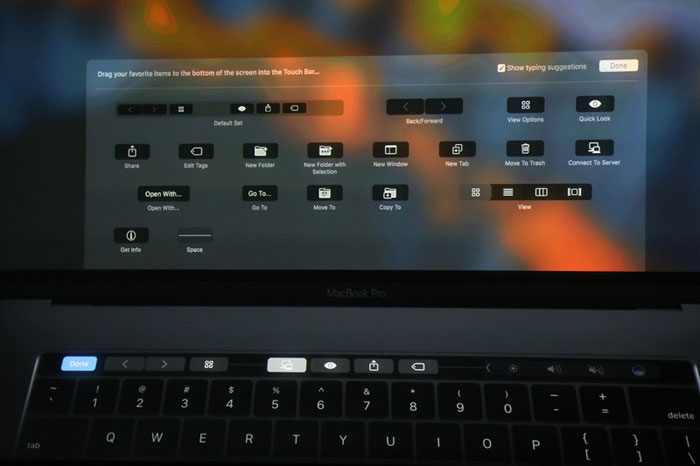 In a touch panel “proshek” the integrated biometric Touch ID module by the second generation. The fingerprint scanner is located right at the edge of the Touch Bar and allows you to confirm online payments and unlock your Mac with a single touch as it happens on iOS devices. 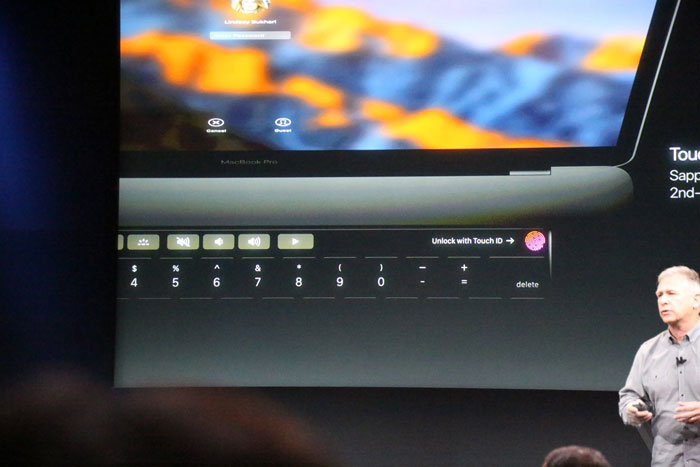 New portable Apple computers are even thinner than the current models. According to Apple’s statement, this is the most thin and light MacBook Pro in history. This was achieved in particular thanks to new display fixtures, metal parts which are manufactured by extrusion method, which allows to produce parts of very small dimensions, thinner keyboard with a butterfly mechanism. Special technology ensures more precise and stable when pressing on any part of a key. 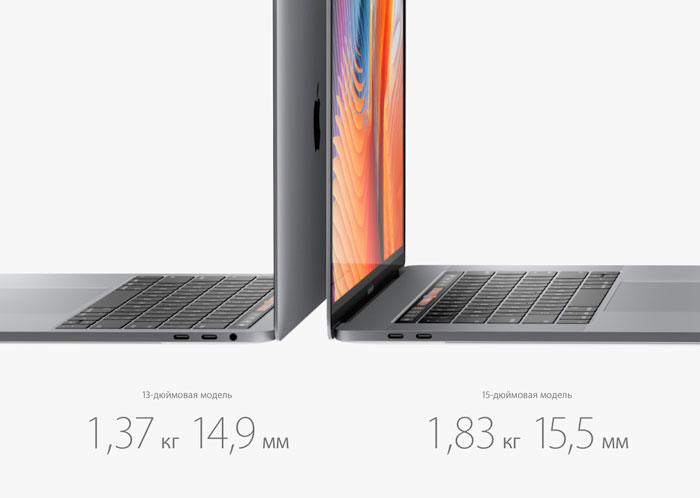 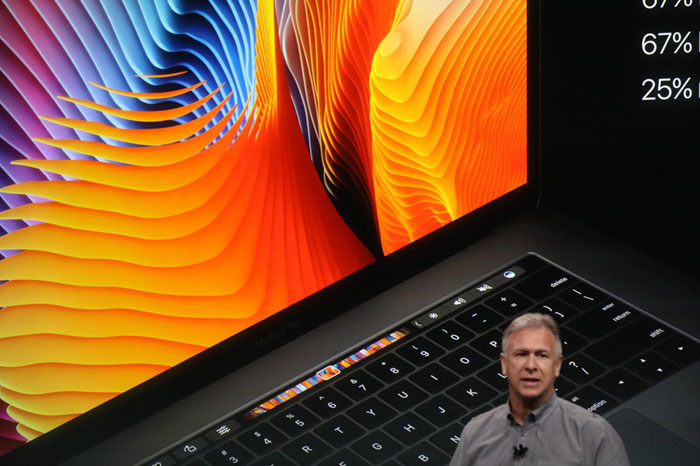 MacBook Pro lost all of the standard ports in favor of the four USB connectors-C Thunderbolt 3 and one 3.5-mm audio Jack. The device is equipped with the best displays on the Mac, said Apple. They are brighter 67% saturated and 25%.

New models Apple laptops got powerful 4-nuclear processors Intel Core i7 processors of the sixth generation, and in top configuration — graphics chips Radeon Pro with the architecture of Polaris, made at the 14-nm process technology. 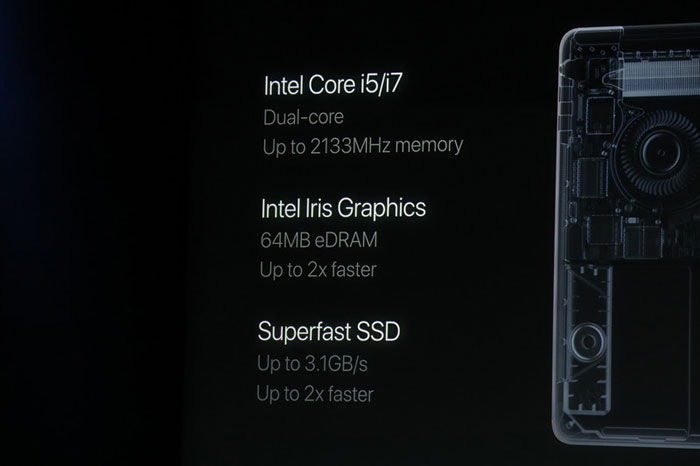 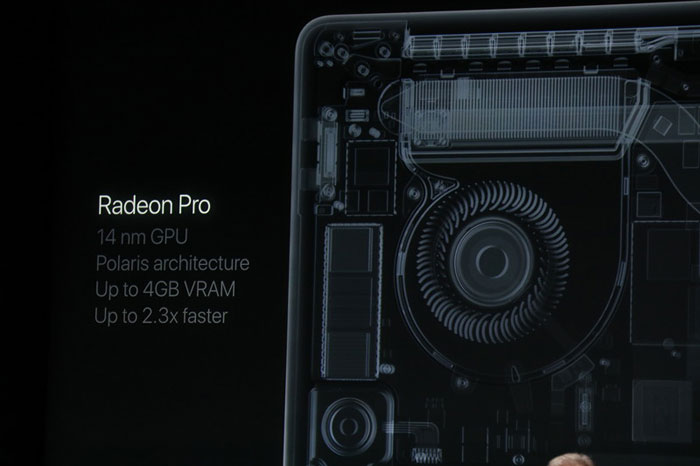 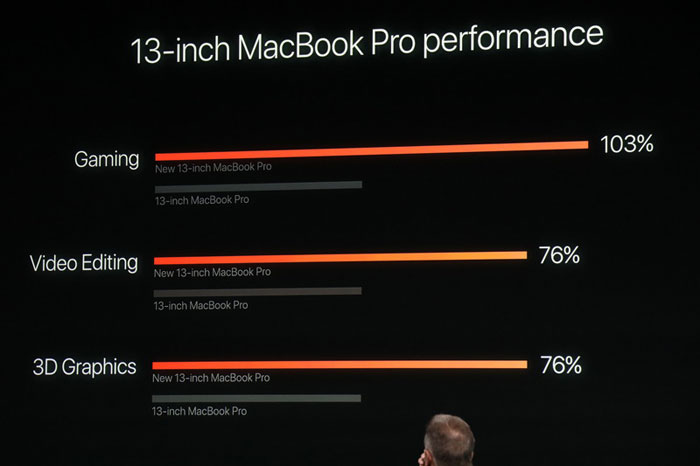 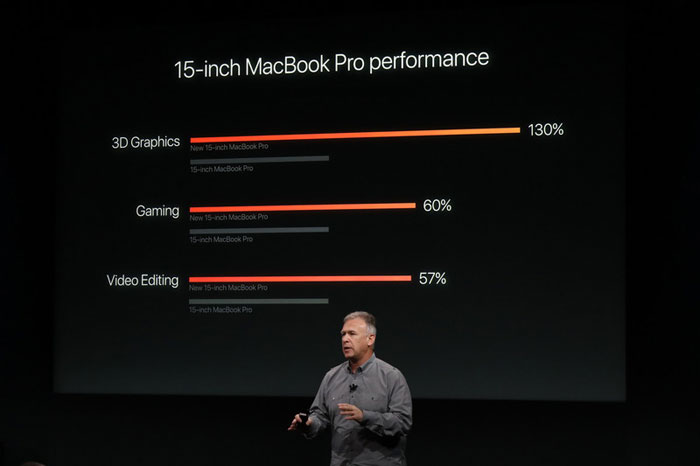 Apple for a long time did not make significant changes in the lineup of Mac, which, according to most experts, many users prefer to do only the most necessary purchases a Mac, postponing the update before the release of really new models. Anticipated update brings the design of the MacBook Pro the most radical changes over the last few years. The last “significant” upgrade, the company abandoned the DVD drive, moved hard disk to SSD and increased resolution displays. It happened in 2012. 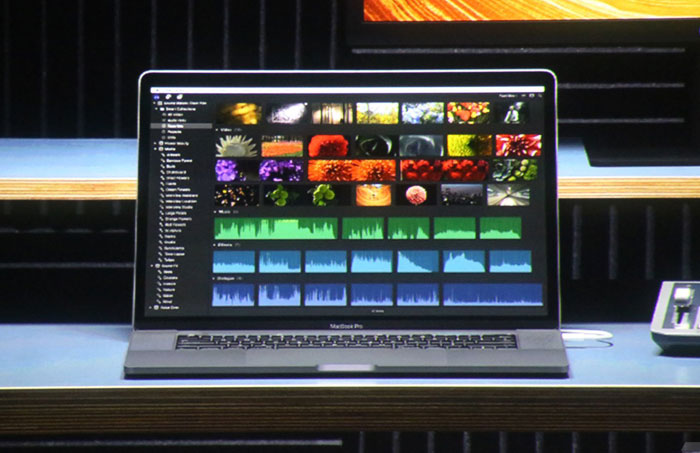 MacBook Pro 13-inch with touch panel Touch Bar and Touch ID sensor are now available from 144 990 rubles. It is equipped with dual-core Intel Core i5 2.9 GHz and Turbo Boost up to 3.3 GHz, 8GB of memory and a flash drive 256 GB. 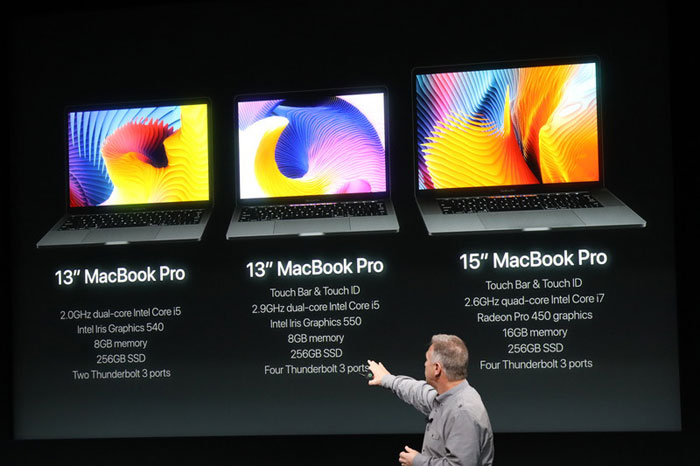 Finally, the 15-inch MacBook Pro with touch panel Touch Bar and Touch ID sensor available for 189 990 rubles. It is equipped with a 4-core Intel Core i7 processor with a clock frequency of 2.6 GHz and Turbo Boost up to 3.5 GHz, 16 GB of memory, and a flash drive 256 GB.