Apple introduced its new Apple Store on Union square in San Francisco, which implemented many of new features and services, their introduction is planned in retail stores worldwide. New shop open 12-foot sliding glass doors to buyers on Saturday, may 21, at 10 am. 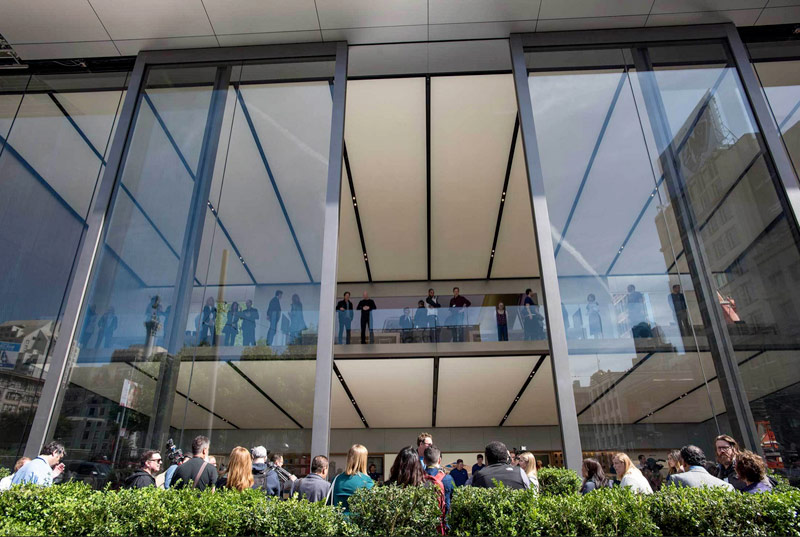 “Fifteen years ago this weekend, Apple opened two of their first store, and we look forward to opportunities to celebrate this date by the opening of the Apple store on Union square in San Francisco,” said Angela Ahrendts, senior Vice President of Apple’s retail and online sales. — We are not just improving the design of the stores — we change their purpose and role in society as we educate and support visitors, as well as working with our network of local entrepreneurs”. 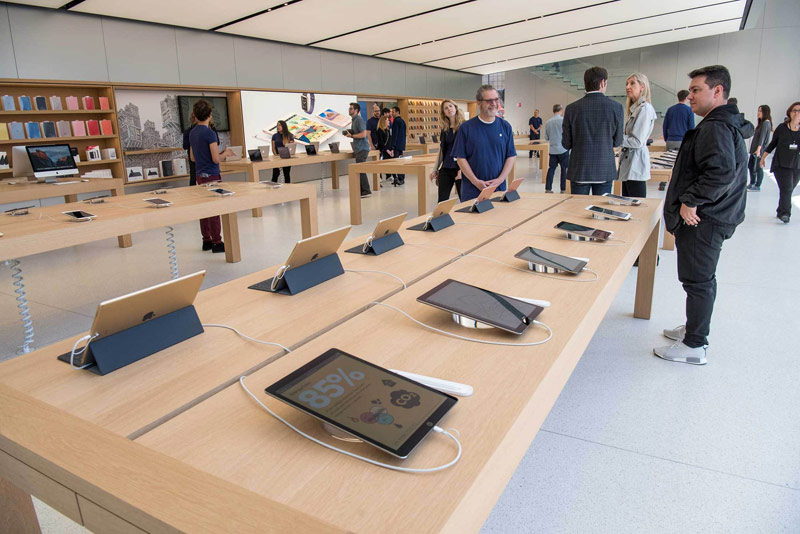 The glass doors of the new Apple store go to Post street and Union square. The building is unique: it binds the most famous square of San Francisco c updated shopping center on the North side, forming a beautiful place for meetings and communication. On the territory of the artistically designed shopping center has benches, outdoor Wi-Fi, a 15-metre “green wall”, there are regularly held performances of musicians. Shop for 100% backed by renewable energy, including from solar panels installed on the roof of the building. 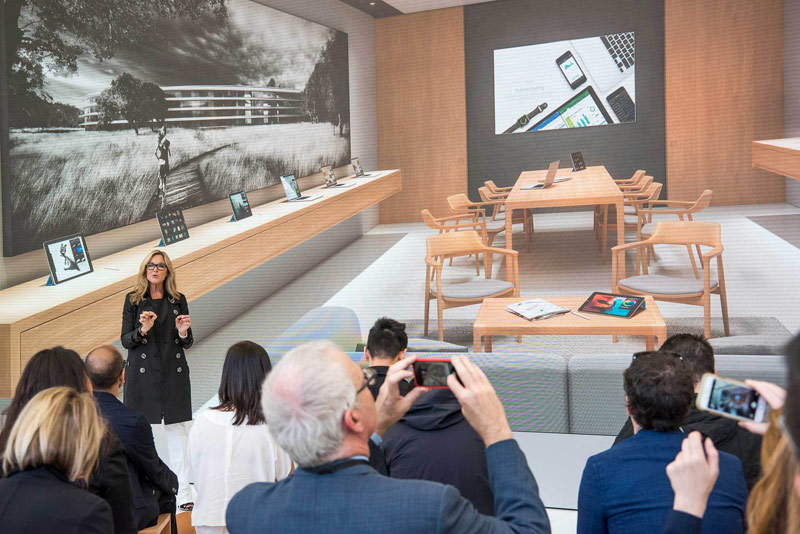 “We are down to the cities in which we operate, and we understand how important is the role of architecture in the community,” said Jonathan Ive, the design Director of Apple. It all starts with the store front, it became absolutely transparent. The interior and exterior of the building merge together. We broke barriers and made the store more affordable and accessible.”

Design features of the new Apple store in Union square:

“Avenue”. This zone is created in the image of the glass Windows along the boulevards, the design of which varies depending on the time of year. Wall Avenue is an interactive showcase, which come alive products and services Apple: from music and creativity to applications, photos and more. Apple in a new position Creative Pro will give professional advice on products and services for creativity. Also on display, “Avenue” customers will be able to see a selection of third-party accessories marked “Available only in the Apple”.

“The Grove Genius”. Here visitors will be able to help with devices under the shade of native trees in the center of the store. 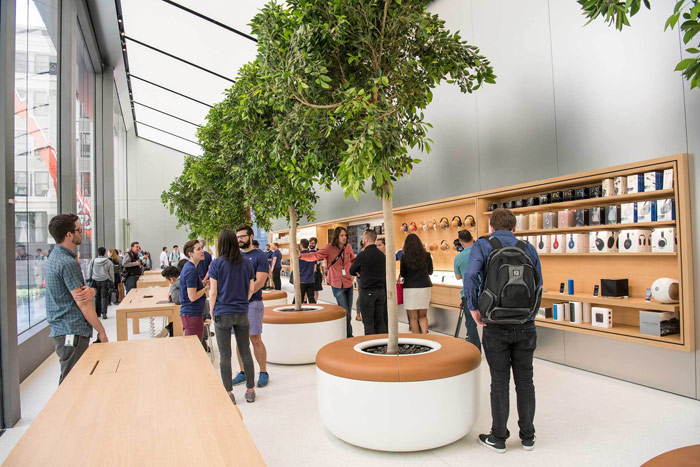 “The forum”. Conspicuous meeting place near the video wall format, 6K. It hosts events from the series “Today in the Apple”, which acquaint the locals with the most talented artists, photographers, musicians, gamers, developers and entrepreneurs to inspire our customers to new developments in your favorite business. In the program “Today in the Apple” includes year-round programs for children, monthly events for teachers, classes for experienced and novice developers, meetings with local experts on art, “Night games” with the participation of editors App Store and more. “Forum” and the wall is a place where you can learn something new, for example how to make movies, is represented in iTunes, or to see exclusive premieres of new music and videos from Apple Music.

“Plaza”. This zone will only be in the largest Apple stores, including in Union square. The Plaza will be open to the public 24 hours a day. There will be a public Wi-Fi and benches. You can see events Today in the Apple” in the fresh air, and on weekends — to see performances by renowned local artists such as Travis Hayes, and global talent, for example, a group of Escondido that after the speech will give an exclusive interview and talk about his work in “the Forum”. In the Apple at Union square in the territory of the Plaza is the fountain known sculptor San Francisco by Ruth Asawa, initially launched in 1969, as well as new work by Laura Kimpton called “Love” provided by the network of Hyatt Hotels. 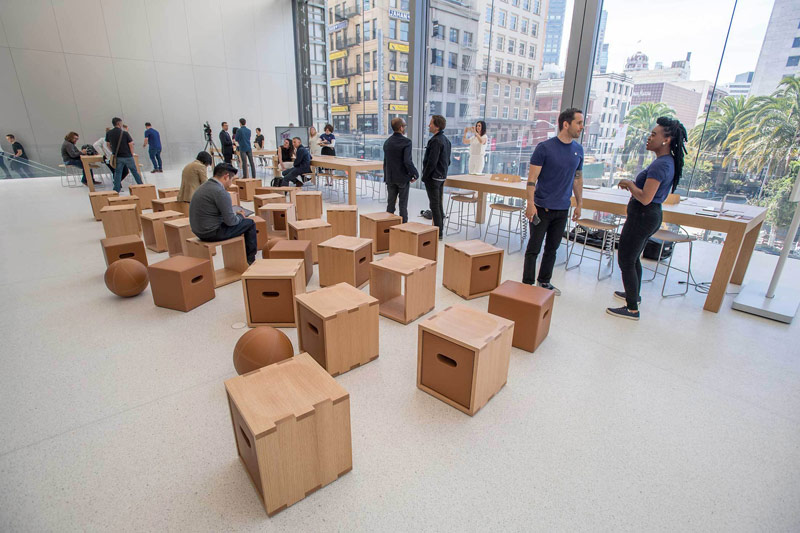 “Negotiation”. Cozy room, in which store managers will conduct personal consultations and training for entrepreneurs, developers, and other representatives of small and medium-sized businesses. 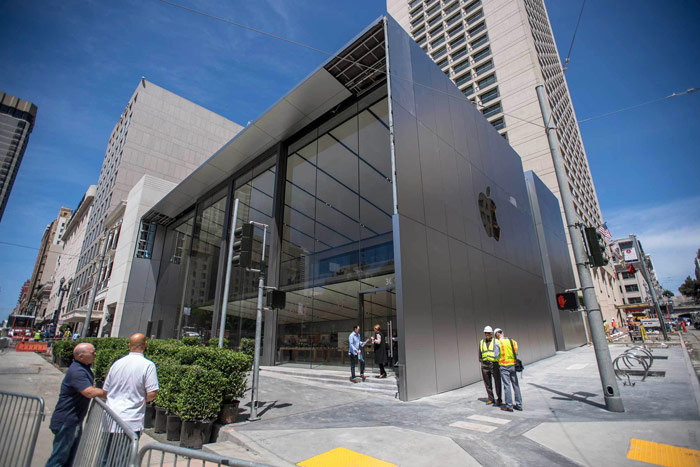 The store regularly hosts training sessions in the areas of “Forum” and “Plaza”, but Apple is not limited to this, and intends to continue to promote teaching of the arts in San Francisco. In conjunction with the School of the arts Ruth Asawa Apple created an art laboratory in which will be 45 working places, equipped with the latest Apple products.