Apple: iOS 10 is already installed on 63% of compatible devices

Apple has published updated statistics, which shows the distribution of various versions of the software platform among iOS users of iPhone, iPad and iPod touch.

IOS 10 took place on 13 September and for the first day of the new operating system was installed on compatible 14.5% of gadgets. After a week, its share increased to 34%. By the end of September iOS 10 broke the mark of 48%, ahead of iOS 9, however, the propagation speed of the previous version of branded mobile platform, Apple has kept the record.

According to current data, iOS 10 by the end of November installed on 63% of compatible devices, iOS 9 has dropped to 29%. While 8% of users remain loyal to iOS 8 and earlier versions of the OS. 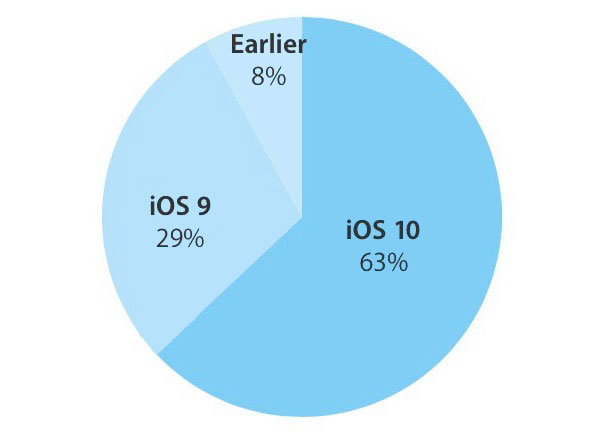 What iOS 10 failed to “hang on” to iOS 9 at the initial stage, can be attributed to problems initially encountered with its installation. Recall that for the first time after the updates on mobile devices “over the air” ones, in some cases, turned into a “brick”.

At the same time competing Android OS 7.0 Nougat in three months after the appearance is only 0.3% market share of devices running Android.