Apple: iOS 10 is already installed on 76% of compatible devices

Apple has published the official statistics of the distribution of the iOS operating system 10, according to which actual OS version is currently installed on 76% of devices compatible with it. Thus, “ten” ahead of the rate of propagation of the previous versions of firmware for the iPhone and iPad.

Since the end of November last year, the last time I published the stats, the prevalence of iOS 10 increased by 13%. IOS 9 for the period fell to 18%, other 6% retained for older versions of the operating system.

In the case of the latest revision of its mobile platform Apple several successful transfers of customers to the new OS than with iOS 9 and iOS 8. So, the same statistics, released in January last year, indicating that iOS 9 is set to 75% (19% were over iOS 8), and the year before iOS 8 was installed on 68% of devices (35% owned by iOS 7). It is connected primarily with the fact that “eight” have caused many problems with the cellular connection and Touch ID, which led to a return to a previous firmware version. 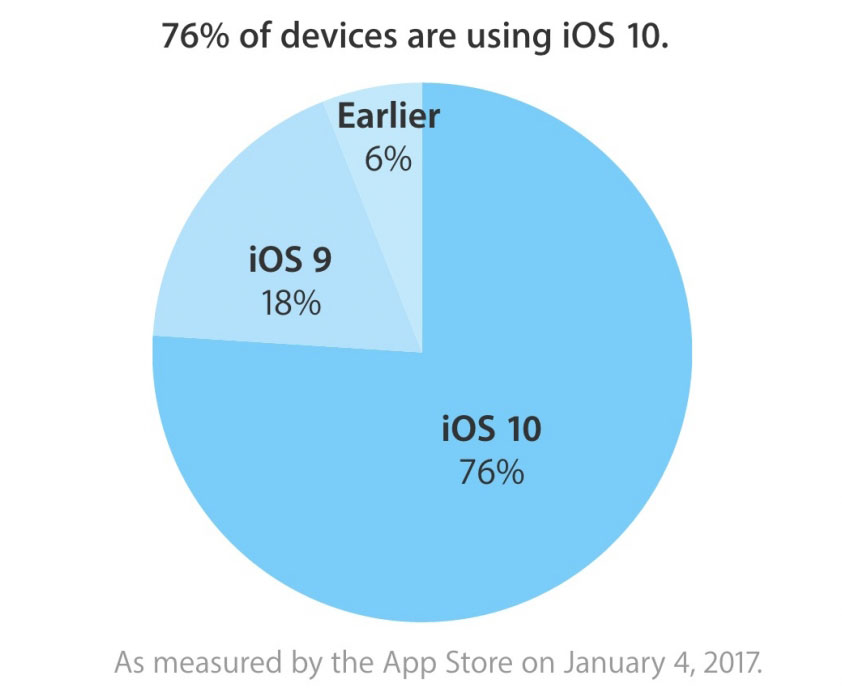 Note that the speed at which the distributed iOS 10, it does not go to any comparison with competing Android 7.0 Nougat. The last four months after release is just 0.4% of the market of devices running Android.

According to rumors, next week Apple will release iOS 10.3 beta 1 with new features among which the dark mode UI and a number of other innovations. These innovations likely to spur the transition to the latest version of the mobile OS.