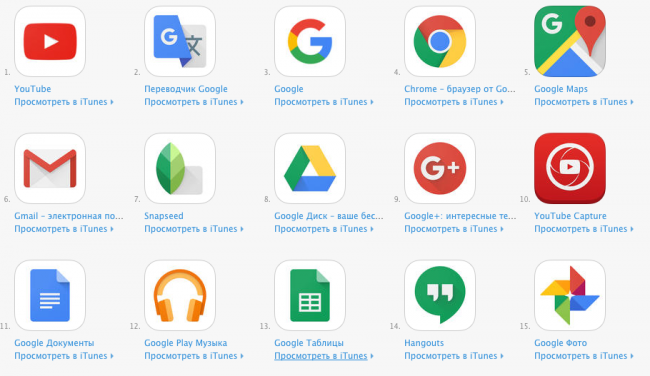 If this morning you wanted to look for something in Google, then surely you have noticed the inscription, which appeared right under the search form and reads as follows: “All the best from Google for Android and iOS”. Below you can see danced a gift box, which clearly conceals a surprise. So what is in that box?

Click on the link “iOS” — and opens a special page in the App Store, which all apps offered by Google, released for the mobile platform Apple. Each program has its own number, and if the numbering is somehow connected with the popularity, it can be concluded that a major iOS hit from Google is the YouTube app. This is not surprising, considering that after the disappearance of this program from a basic set of iOS users by inertia continue to install on new devices.

In fact, the list of 49 applications developed by Google for iOS, can not fail to impress. It seems that the search giant seriously set out to create a complete ecosystem in the camp of the enemy. Where are the curious here are the efforts of Apple, which currently only has two apps in Google Play — Move to iOS and Apple Music.