At WWDC on Monday, Apple will unveil the next version of OS X, and one of the major innovations in the operating system should be the voice assistant Siri. Prior to the event, personal assistant leaked on the support of the desktop platform Apple. 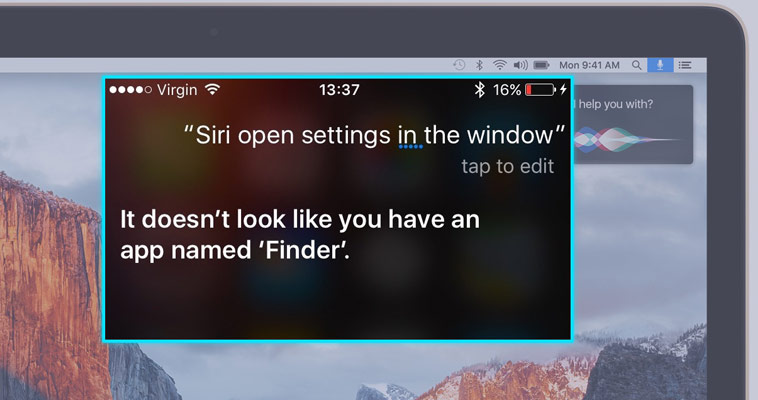 Developer Brian Roumeli has published screenshots of Windows response virtual assistant of Apple. To the question “Siri, open the preferences window” function is used “it Seems that you have no app called Finder.

File Manager Finder is part of the operating system of Mac computers. Although iOS is based on OS X, for it has no such application. We can assume that iOS 10 will be a special version of the Finder to work with files. However, in iOS 9 already have an app to access the contents of iCloud Drive, and the release of separate apps for file on mobile platform Apple is very unlikely. Most likely, Apple will take the assistant on the Mac, so working from the cloud, Siri is already aware of a desktop app Finder.

Earlier MacRumors has published screenshots with the Siri icon in the Dock and in the status bar of OS X. According to the newspaper, pressing any of them will activate Siri on a Mac, and while it listens to the user, the display shows the animation of color waves, both on iPhone and iPad.

At the moment, Apple’s voice assistant available on iPhone, iPad, Apple Watch and Apple TV set-top boxes. Therefore, the appearance of Siri on the Mac — just a matter of time, and it seems that that time has come.

It is expected that the assistant will be part of OS X 10.12 (10.12 or macOS). Feature will help users to find required information on your computer, run programs, send messages, read mail, manage the “smart home” HomeKit, and perform other useful tasks.