The MDK community in social network “Vkontakte” blocked by a court decision, has opened a new page and within hours, they collected nearly 5 million subscribers. 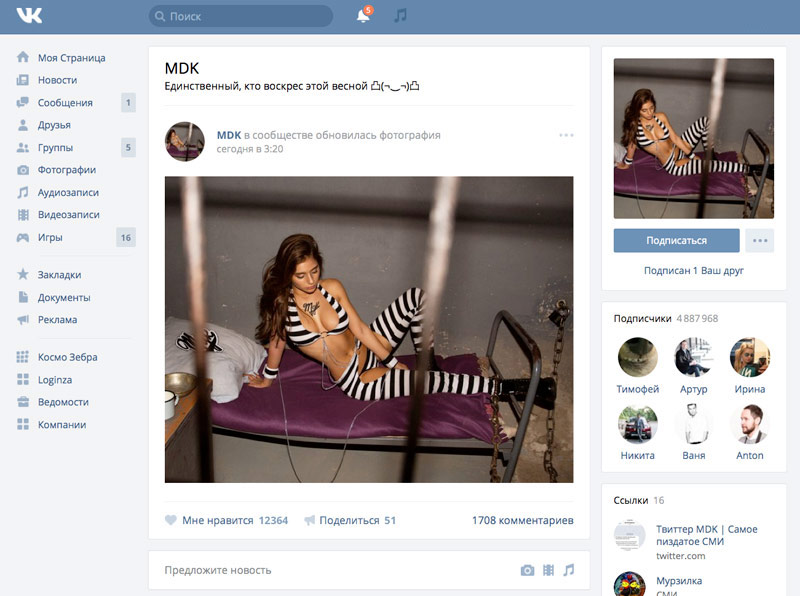 Administrators blocked by the decision of the court of MDK community in the “Vkontakte” created a new public in the social network and began to carry to the subscribers of the old community. The new community is located at the following address https://vk.com/mudakoff.

The first entry in the form of a meme with the hero of the popular series “Game of thrones” Jon snow (in the story the hero is resurrected) appeared in the community at 3:38 am. As of 16:30 GMT the number of subscribers exceeded 4 million people.

General Director of “Vkontakte” Boris Dobrodeev confirmed RBC fact of transfer of subscribers to MDK is locked in a new community. On the question of whether it threatens with sanctions of the social network by Roskomnadzor, he found it difficult to answer, but noted that the claims court concerned the specific content in the old public, which in the new page no.

“7.5 million people users, who have decided that they as a whole MDK interesting, nothing to do with it, and for this reason they decided to move to a new community”, — said the interlocutor of RBC.

MDK group has been blocked in social network “Vkontakte” on Saturday, may 21. If you try to go to the page appeared the message: “This material is blocked on the basis of a court decision (Smolninsky district court of St.-Petersburg) from 27.10.2015 No. 2-4220/15”.

Smolninsky district court of St. Petersburg ruled to ban access to the group MDK in October. The court thus complied with the requirements of the Prosecutor’s office, which is found on the page “information materials that offend the feelings of believers, degrading different groups of people on grounds of religious and national identity”.

In February of this year, the City court of Saint Petersburg rejected the appeal of the administration of MDK on the decision of the Smolninsky district court.