The youth of China often buys cheap smartphones local production, such as Oppo and Vivo, but the level of confidence in these two brands is much lower than for Apple. 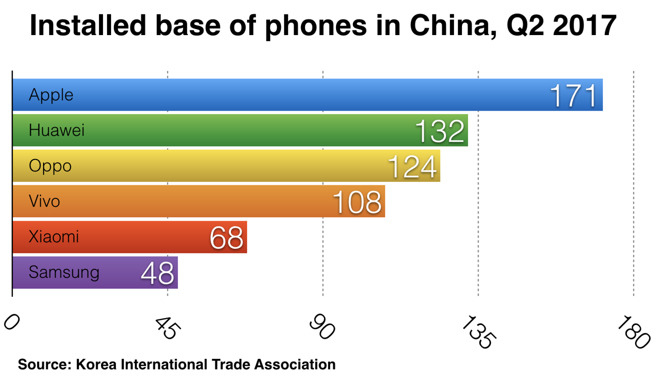 According to the report of the National trade Association of Korea, Apple has the largest base of active devices in China 171 million phones.

Huawei is the second company with 132 million, followed by 124 million with Oppo and Vivo with 108 million.

The report also said that 63% sold in China devices budget. Their value does not exceed $ 300. Smartphones are more expensive than $ 600 is a share of 6.4%. The vast majority of them from Apple.

Chinese device popular with young people and sell well within the country. However, only a quarter of smartphone owners Oppo or Vivo are ready to continue to buy gadgets from these manufacturers.

Apple, the situation is much better: 53.4% of users of iPhone as their next smartphone are planning to buy a new iPhone.

Bad things are at Samsung with only 7.2% of the Korean machines are planning to buy Samsung in the future.