Leading mobile analyst is too pessimistic.

It all began at 10:00 and 10:03 the shop is covered: all official sellers have signaled that to get the iPhone on opening day is now impossible. The waiting period for those who did not pre-order, will amount to a few weeks.

The game immediately broke Eldar Murtazin, a leading mobile analyst who buries the Apple every year. Here is his tweet:

In November in Russia officially sell 15 thousand iPhone X. On the gray market on the strength of 3-5 thousand. The game is played)

Note the mocking smiley face after the withdrawal of the “Game played”. No wonder the Eldar liked protasovsky here’s a tweet: 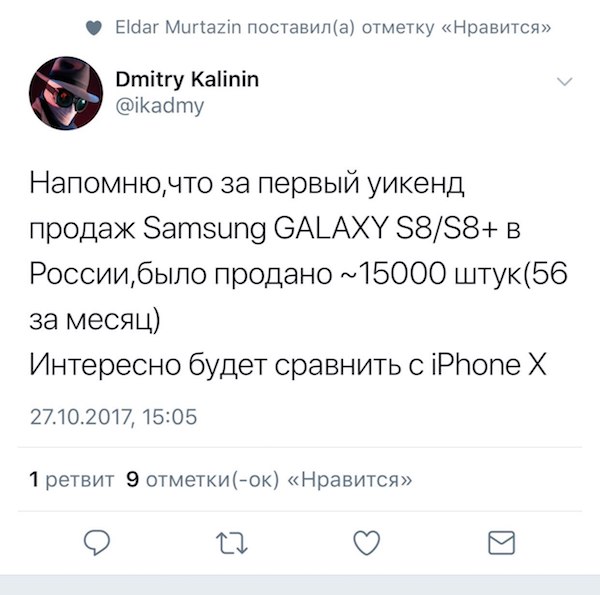 However, we must pay tribute to Murtazin: nobody else risked reputation and did not specify the number of instances of X iPhone dedicated to Russia.

Therefore, I (purely out of despair) posted the original tweet senior analyst to his Telegram.

Soon I’ve received feedback from trusted sources, who openly laughed at the information, placed by the Eldar.

“15 thousand in November? He’s lying” – this was the verdict of the people who are directly engaged in the sales of iPhone X.

The real data are as follows:

1. 15 thousand official iPhone X is allocated only to the first Russian weekend (the peak of the panic – turn in the CDs, and the like);

3. Just for November, we will officially bring at least 40 thousand iPhone X and not 15 thousand, as predicted by Murtazin.

Once again: 40 thousands (at least) is all the retailers (dealers) plus operators plus the Russian Apple Store.

The deficit, of course, will still be, but the important thing is to fix that mobile analyst made a mistake more than two and a half times.

In addition, irrepressible Eldar missed for the month: according to him, 40 thousand iPhone X will get to Russia only in December:

This too is nonsense – before the holidays “tenths” of iPhones is clearly more than in November.

Conclusion: read the right media, don’t believe Eldar Murtazin and know that with iPhone X it’s not so tragic, as he wants to show a leading mobile analyst.