How did iPhone: infographics from the creation to the release of the Apple smartphone

Apple celebrates ninth birthday. Debuted 9 years ago gadget with a touch screen and a single navigation button divided into “before” and “after” the smartphone market and created his company. Over the years, iPhone has become indispensable for their owners, subject to copying by competitors and the main source of income for Apple. But all we know about the Apple? The authors of the resource Quartsoft has made an infographic of technology development, which eventually led to the creation of “Apple” gadget. 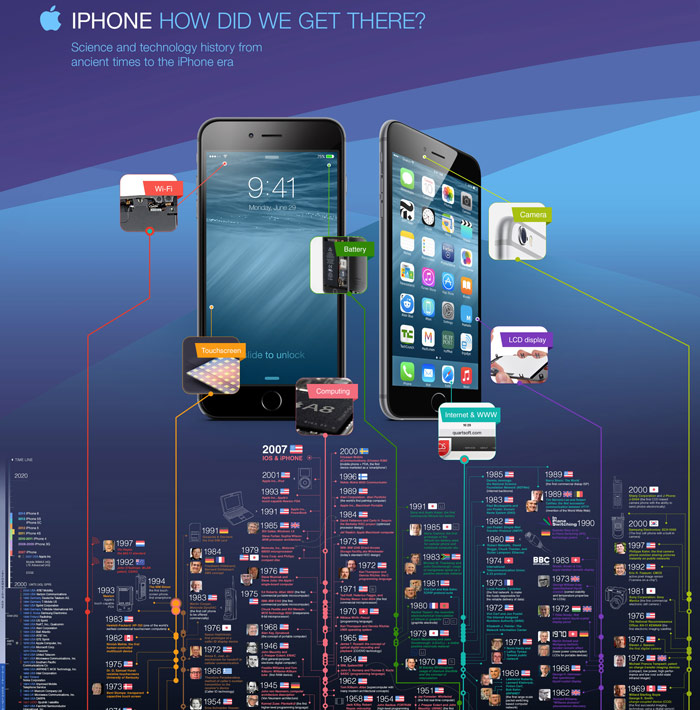 Illustration talks about how, when and by whom was first made revolutionary discoveries that can facilitate human life in modern society. Few people knows that in 1880 David Edward Hughes in his laboratory in London showed how using a simple schema that contains the microphone and the telephone, to detect, even at a distance of a quarter mile, “aerial electric waves” created by electrical spark.

In 1800 Alessandro Volta developed the first DC power source – the precursor to modern electrical batteries, and in 1827-m German physicist Georg Ohm published the law, which played a decisive role in the further study of electrical phenomena.

All of these technologies are used by people to this day. Because of these developments saw the iPhone in the form in which we know it.