In France enraged the buyer trashed the Apple store [video] 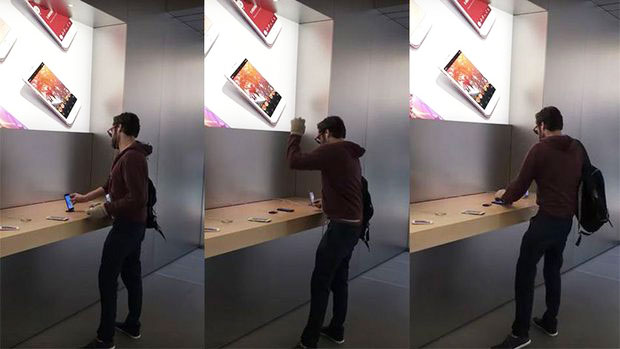 It is unclear what would Apple piss off the average Frenchman, however, his anger knew no bounds: a young man in dark glasses walked into the company store in Dijon and began to smash the iPhone, iMac and MacBook large steel ball. Their actions, he was accompanied by shouting about consumer rights and swore to support. In the video you can see that he broke no less than 12 gadgets.

As you can see from the video, the Frenchman took care of the security and put on the glove, so as not to cut yourself on the glass. In addition, he tried not to harm the interior, so before each breaking technique carefully laid on a horizontal surface.

In between strikes, the Frenchman shouted out the phrase that Apple violated his rights. “And you know what? That’s what will happen!” “he said, and broke another iPhone.

After the completion of the action, which was recorded on video, the man tried to get out of the Apple store, but he was surrounded by employees of the shopping center. From an outlet of the exuberant buyer gave security, he was then detained by police.