In a future update of iOS 11.1 Apple plans to introduce more than 30 new emoji that are part of the Unicode standard updated 10. Just after its introduction, users will be available approximately 56 not previously used emoticons.

Oreo Android users will also have access to the same sets of emoji. Developers of applications for mobile operating system from Google can include in their applications support for new emoticons, even on older versions of Android.

Section has been enriched with animal images giraffe, Zebra, hedgehog, Brachiosaurus and cricket.

In the “wardrobe” replenishment: baseball cap, scarf, verici and cloak.

To talk about their culinary preferences is now possible with the help of three new smiles: a box of Chinese noodles, broccoli and the pie.

These emoji are now gender-neutral and is available with different skin tones.

Mythical heroes and creatures was even greater.

Emoji is primarily designed for the expression of emotions, so thanks to these four new emoticons, now with this it should be no problem.

Sports activities also became more, added a climbing, Curling and sled. There are new emoji with a girl in the sauna. 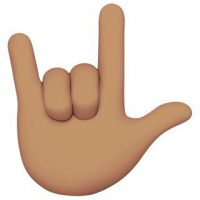 But this smile is not so simple. It turns out that he really has no attitude or “rock goat”, nor “raspaltsovku” new Russian. It even incorrectly used as a synonym for the word cool. American sign language this gesture is the abbreviation ILY designating the phrase I love you (I love you). It is an informal way of expressing positive emotions — from the respect and love for the recipient of the sign.

An important innovation this year was the emergence of a symbol of bitcoin the most popular cryptocurrency in the world.

The Unicode standard appeared in 1991. It consists of two components: the universal character set (to more than one million items) and the system for encoding those characters. Standard constantly adding new Emoji.