In photography to compete with the iPhone can only Canon 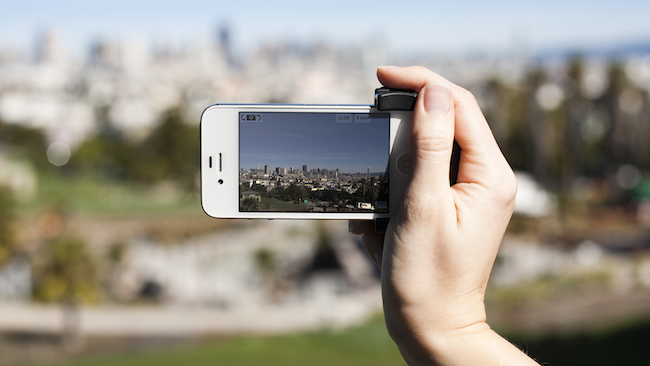 About changes in the world of photography that have made smartphones in General and iPhone in particular, wrote everything, including us. Recently a popular website PetaPixel has published statistics of the Flickr photo-sharing site, collected by the EXIF data of images uploaded by users.

Report Flickr is good primarily because it is a universal website. Unlike sites like 500px, it is aimed at a wide audience, including both professional photographers and Amateurs. In addition, Flickr is the largest photo site: last year, almost 100 million users of web hosting have uploaded over 10 billion photos. What do the numbers show?

First look at generalized analysis by brands, without separation into types and models.

The rapid growth of Apple allowed the company to do the impossible: to take the second place, beating even the undisputed market leader of photo solutions Nikon. The victory seems all the more compelling against the background of growth shown by Nikon in 2014. The figures clearly confirm the fact that large and complex camera go in a narrow niche solutions for professionals, the broad masses of users prefer mobility, portability and the ability to quickly share shots with the world.

In the same trend that Samsung has understood, but traditionally have failed to draw the right conclusions. Samsung cameras with Android on Board do not cause anything but Homeric laughter, and a traditional Korean company’s problems IN did not allow her to achieve any notable success in an interesting and dynamic segment of mirrorless cameras with interchangeable lenses.

Also this ranking shows the total inaction of the main players Canon and Nikon in this segment, obviously, due to the fears of marketers. Doing anything, so as not to interrupt the sale of their SLR cameras, the “patriarchs” of the photo market is clearly losing the initiative, losing to aggressive players in the face of Sony and Fujifilm.

In “individual events” on specific camera models the situation is even more disappointing for the “Potapenkov”. Even an old iPhone 4 confidently bypasses the flagship Canon and Nikon, and separation from the favourite rating — iPhone 5 — even devastating.

Now look at the rating of mobile cameras.

The first thing that is clear from this ranking — Amateur digital cameras died. A series of bankruptcies of the companies that produced them, is the most vivid proof. Left on the sidelines, Polaroid, Kodak and others are trying to reverse the trend, releasing a lot of weird gadgets: sport camera, smartphones, mobile photo printers — but they hardly save.

It may also be noted that 2014 was very successful for Samsung: marketing activity in the first half bore fruit — some models of the Korean manufacturer has included in the rating. What’s particularly interesting is an old Galaxy S3 continues to hold his advantage over the flagship S5, which, in turn, was almost left behind Apple flagship iPhone 6, despite the fact that the latter came out much later. But a marked decline in sales of the Korean company, which came in the second half of 2014 will clearly lead to strong changes of positions in this ranking.

The dominance of Apple becomes even more obvious if you look even two ratings. The first is a daily ranking of the same Flickr that shows the total number of users who downloaded at least one picture from camera of any brand: https://www.flickr.com/cameras 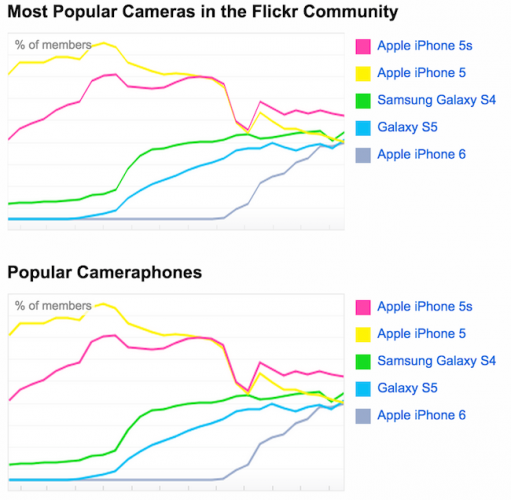 Here we see that mobile phones do not leave chances of professional solutions for “everyday” use, and Apple surely dominates in this segment, since the main competitors are the iPhone new iPhone.

The second top ranking of quality of mobile phone cameras, compiled by the test laboratory of DxO Labs. The rating DxO Mark (mobile Chapter) also demonstrates the superiority of Apple solutions based on objective measurements of the quality of the photos.

As you can see, the photo market is changing, and changing very rapidly, and one of the few constants that remain unchanged — the traditional superiority of the solutions from Apple that we love the company.