This week, Apple held a major annual event for developers – WWDC 2016, presenting a new version of iOS, macOS, tvOS, watchOS, new applications and services. At first glance it may seem that mobile platform is not very rich in innovations, in terms of design, but it is not so. 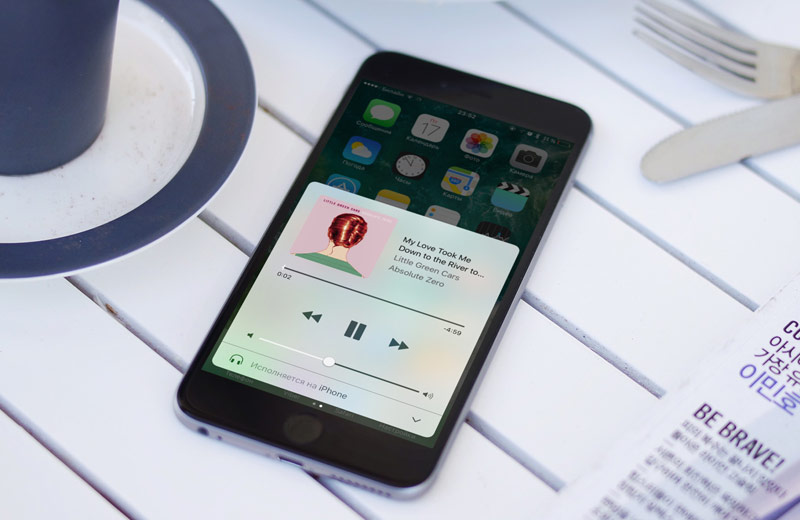 iPhone OS began with the skeuomorph, and for very good reason: Apple had to convince users that a glass panel with no mechanical buttons may replace the usual telephone, calculator, calendar and more. With increasing popularity of iPhone the need to prove the similarity of the operating system with real objects disappeared, and Apple introduced iOS 7 with completely redesigned minimalist design with bright colors, flat interface and new animations.

A radical redesign was a necessity, as the appearance of iOS 6 is already quite boring, and Apple required a large step forward to set a new fashion for the coming years. iOS 7 successfully coped with this task, although at first not everything went smoothly: the font was difficult to read, and the animation caused the symptoms of “digital motion sickness”. Recently “Apple” the company has listened to user feedback seriously and modified the platform. The resulting fonts become more readable, and the animation more natural.

iOS 10 is one of the largest updates to the operating system, combining the style of iOS 7 and better design decisions of previous versions.

iPhone and iPad years used a variety of swipes and sliders to display more information, but they were rather limited and inconsistent. For example, in iOS 9 for open Item management need to swipe your finger up from the bottom, but it is absolutely the same movement on the lock screen launches the camera. A swipe to the right opens the screen with password prompt, which has nothing in common with additional information. Thus it is very difficult to create a clear, logical and user-friendly interface. Of course, ordinary users are unlikely to think about something like that, however improper implementation negatively affect the ability to use all the functions of the operating system. 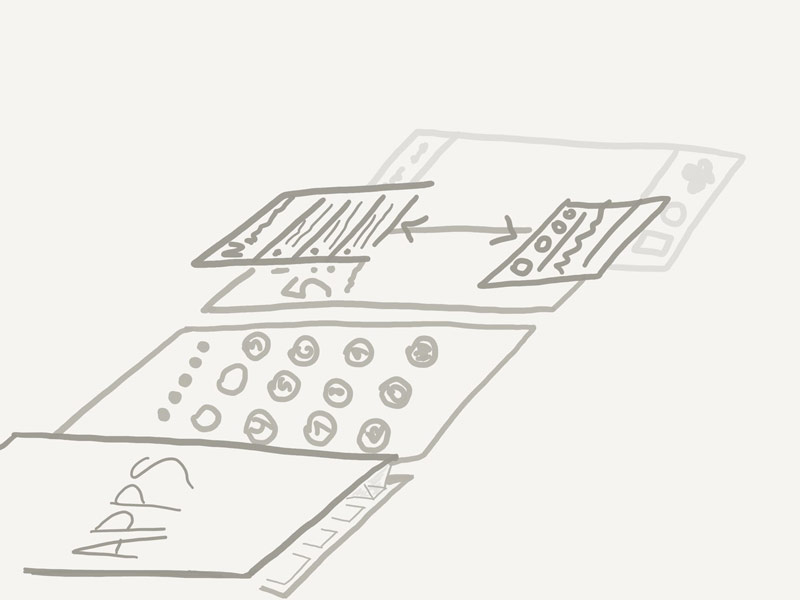 With the release of iOS 10 unsuccessful combination of swipes, finally disappeared, and now having fingers in any direction, the user receives new information. To run the notification Center will still need to swipe down to control – swipe up to launch the camera and to the left, to display the widget toolbar to the right.

In addition, the new version of the operating system has also denied one of the basic functions of Apple devices – Slide to Unlock – the first thing demonstrated to Steve jobs at the presentation of the iPhone in 2007. In most cases, a well-known gesture is no longer relevant, so as to unlock the Touch ID uses, and users is much more important to quickly access the right data on the lock screen.

The system of layers

With all the changes in the design of iOS 10 was on a higher level. In addition, it can be noted the so-called system layers: on the top layer we have card notification widgets, notification Center and the new 3D Touch, on the lower layer is the home screen, and the middle layer about the day and other content on the apps. 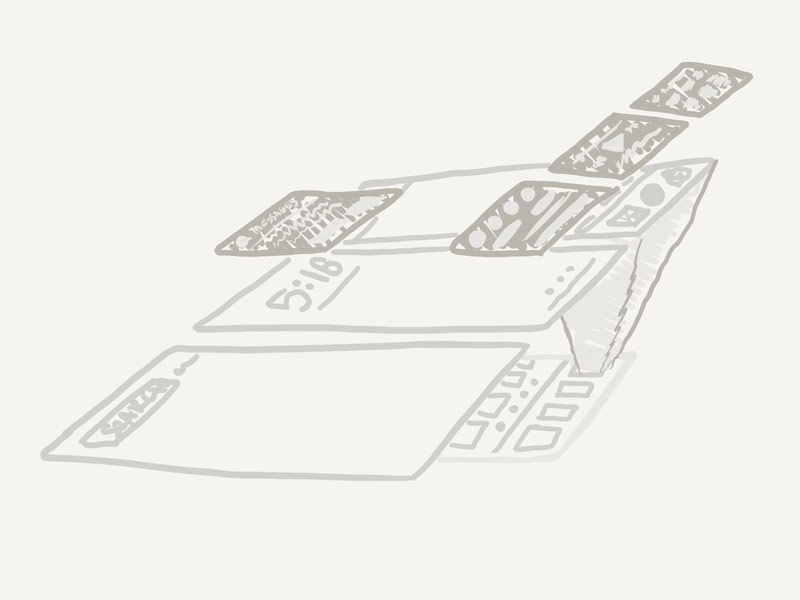 A new system of display widgets, notifications, 3D Touch and control Center fits very well into the concept of layers: opaque, rounded interface places each notification or widget in your own environment. Then the contents can “navigate” between the layers: the bottom layer (control), medium (notification, Touch, and 3D widgets) or top (Banner).

Due to the system cards the control now looks organized and easy to use, as each type of information allocated to its own page. In the future, it may be a page specifically for third-party applications. 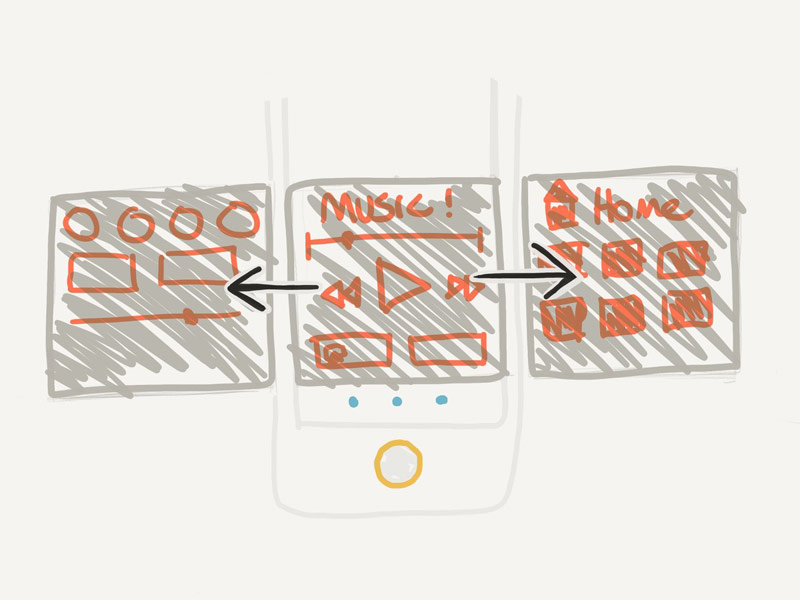 As in iOS 7, Apple still relies on thin fonts that will be legible even at small size. SF SF UI Text and UI Display are the main system fonts iOS 10. The first covers all sizes up to 19 PT, and the second from 20 PT. UI Text is thicker at smaller sizes to maintain readability and style of the original San Francisco and Helvetica Neue. UI Display – thinner font, but all the Apple applications it is combined with a bold font for headings. 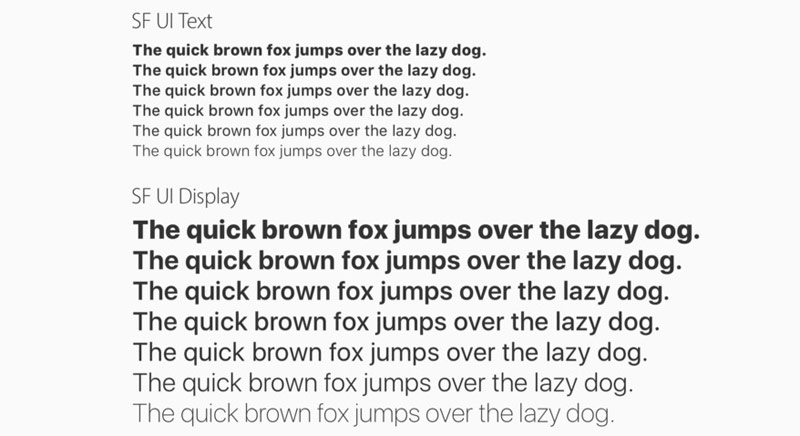 The combination is more bold style of text for headings and thin for subheadings in the applications “Music”, “Health”, “Card” and “Home” provides more than simple perception of information and new sensations when working with iOS devices.

The Music app is a great example of rethinking the minimalistic style of Apple: the absence of color and dark backgrounds for white, smooth background, the transition to the large, bold headlines and images for each section. In the leadership of the Human Interface Guides Apple asks developers to create an area for pressing sizes 44 x 44 PT for all UI elements that the user be able to use any feature. 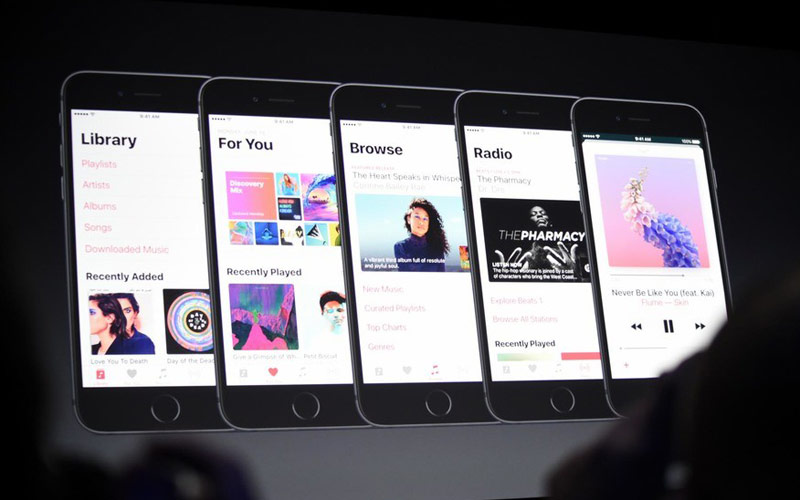 Colors the company has also paid due attention to. For example, the Health app uses bright colors and icons to distinguish types of activities. In the “Music” albums allows Apple to speak for itself by highlighting the fuchsia color for your text links. The house opposite has a dark navigation bar, orange lighting and full color background for each room.

From the point of view of availability and sensations redesign gives you the opportunity to use the system in new ways. Enhanced user interface elements provide a comfortable work even on smartphones with smaller diagonal display.

Based on presentations and public documentation, we saw only four applications that use the new design language Apple. With the development of iOS such apps will become even more.