iPhone 6 Plus vs Samsung Galaxy Note 7 and Galaxy S7: comparison of characteristics

In early August, Samsung officially unveiled the Galaxy Note 7. Phablet was pretty good, but in the mobile market there are quite a few smartphones with large screens, which is unable to compete with the latest flagship of Samsung. However, the main rivals are considered to be the 7 Galaxy Note edge Galaxy S7 and iPhone 6s Plus. Which one is better? 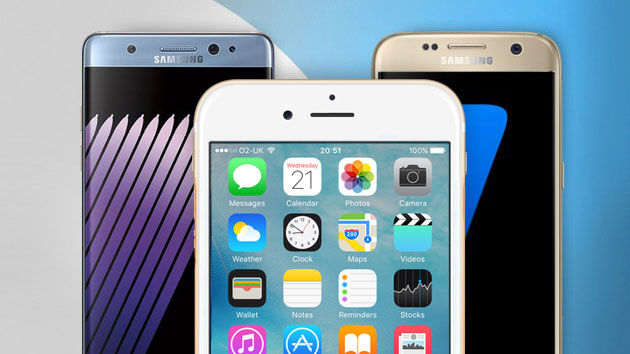 iPhone 6s Plus was presented almost a year ago. In a month Apple will reveal its successor, although at the moment he is still a current flagship with a 5.5-domovym Full HD display. Samsung Galaxy S7 edge offers the same diagonal display, but with a resolution of Quad HD. A new model of Galaxy Note 7 is characterized by the 5.7-inch screen with a Quad HD resolution and a protective glass Corning Gorilla Glass 5. The latter, as we have seen, stronger in the fall, than its predecessors, but it is much less scratch resistant.

It is recognized that all three devices have several common traits. For example, 64-bit architecture processor, premium build quality, software flash for the front camera and the function of “live” photos. As the device Samsung and iPhone 6s Plus allow you to make contactless payments and have biometric sensors. All three apparatus are able to recognize fingerprints, but with the Galaxy Note 7 there is also a retinal scanner.

Speaking about the performance, Samsung Galaxy Note 7 is equipped with a processor Samsung Exynos 8890 with a clock frequency of 2.3 GHz, or the Qualcomm Snapdragon 820 with a frequency of 2.15 GHz, depending on the region. In this respect, features of Galaxy S7 edge does not differ from it. iPhone 6s Plus features an a chip Apple A9, paired with a coprocessor M9, which is in the background and monitors the activity of the owner. the iPhone can only boast 2 GB of RAM at a time as S7 edge and Note 7 have 4 GB of RAM. Seemed to advantage on the side of Samsung, but only on paper: in real use, the Apple smartphone is faster.

Below you can read the full technical specifications of iPhone 6 Plus, Samsung Galaxy Note 7 and Galaxy S7 edge.

Judging by the specs of the Galaxy S7 edge and Note 7 to surpass iPhone, however, real performance tests and performance say otherwise. Despite the more modest specifications of the Apple device.

In the end, it all comes down to the choice between the two operating systems – Android and iOS. If you like Google, then there is no doubt that both smartphone from Samsung will be the best solution. For those who prefer the iOS look to the iPhone 6s Plus. Despite the fact that the device is basically deprecated, it is still competitive. In any case, before you decide to buy, should wait for the official presentation of the iPhone 7 and iPhone 7 Plus, the announcement of which is scheduled for September 7.