IPhone 6 review: great for iPhone and all kagdogo review 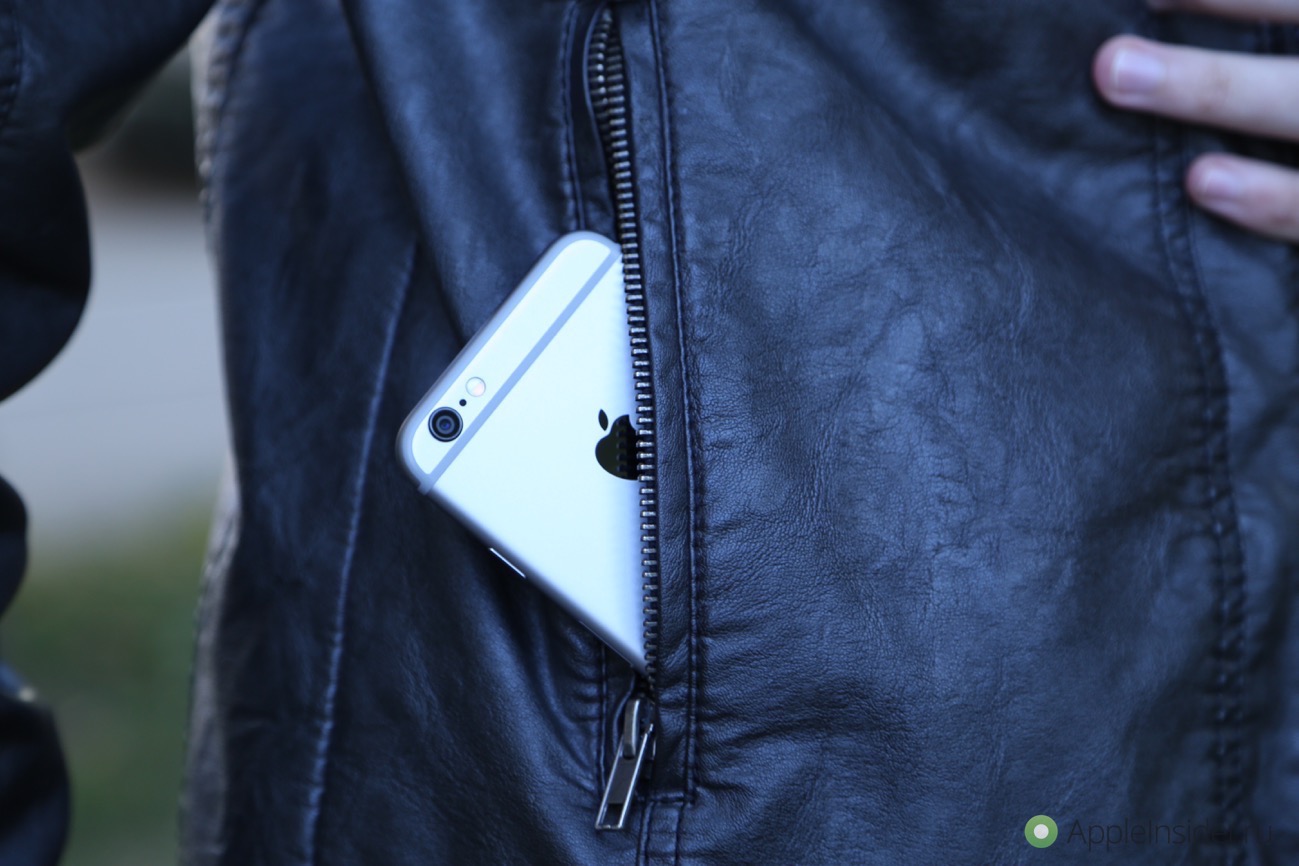 On the first day of sales of iPhone 6 and iPhone 6 Plus, September 19, our editorial “arrived” both of the new smartphone. We had all weekend to review the new products and preparation of detailed textual reviews. We will start, as you’ve probably guessed, with the iPhone 6. At our disposal was the version with 128 GB of internal memory.

By tradition, the acquaintance with the new device from Apple we start with a study of its brief specifications.

Upgrading from iPhone 5s to iPhone 6 can rightly be called one of the most ambitious in the history of the iPhone. iPhone 6, though not become easier in comparison with its predecessor (129 vs. 112 grams), but its thickness is only 6.9 mm compared to 7.6 mm iPhone 5s.

The screen resolution has remained virtually unchanged and is now 1334×750 pixels. It seems to be not so much (not Full HD, Yes), but thanks to improved contrast ratio 1400:1 display iPhone 6 has become one of the best on the market.

New 8-megapixel iSight camera in iPhone 6 has got the Focus Pixels and improved face detection. the phone comes in three colors — “Grey space”, silver and gold, as well as in three capacities — 16 GB, 64 GB and 128 GB. 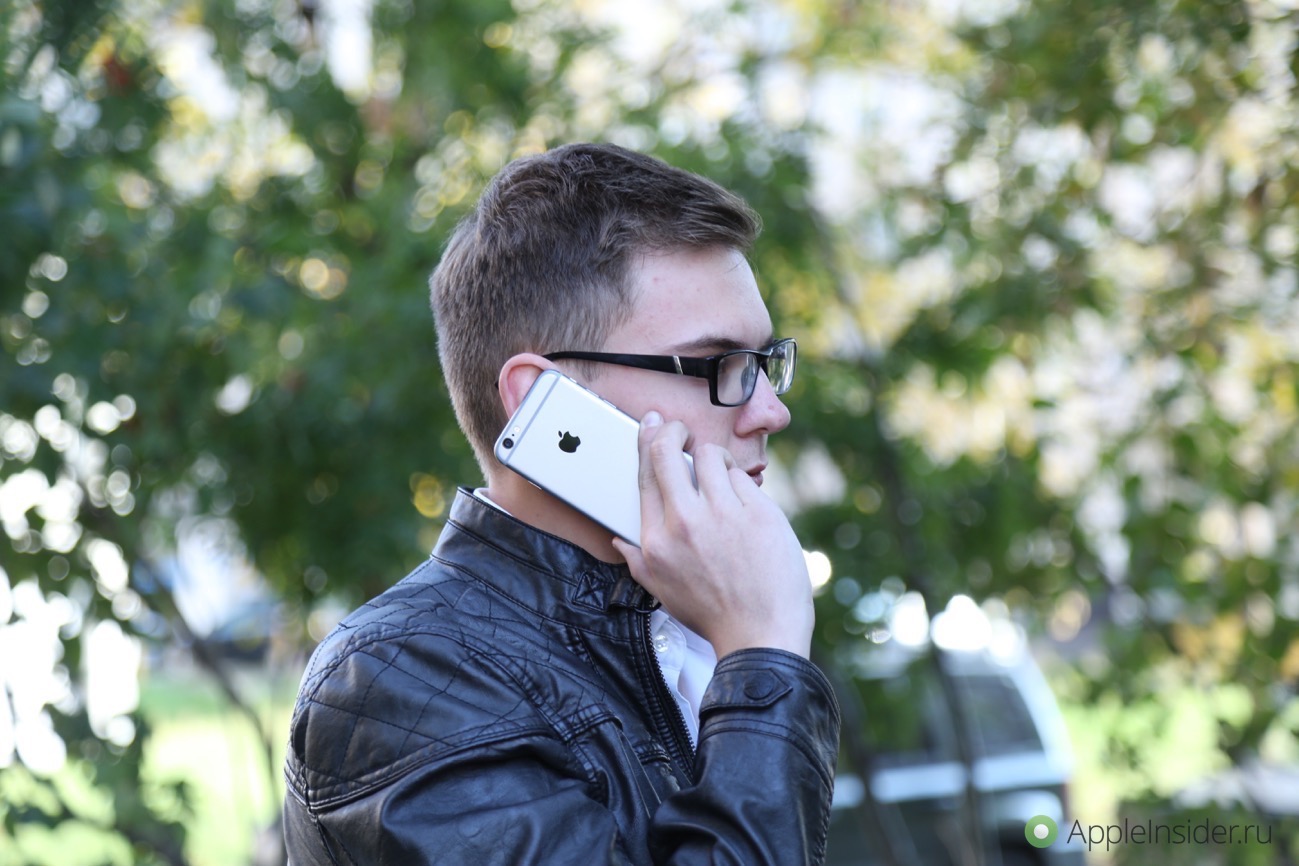 But enough ranting about the technical characteristics of the iPhone 6 — will move on to a closer acquaintance with the novelty.

What’s in the box?

Box new iPhone 6 deserves special attention. No familiar to us image of the device on the front side — a simple white “brick” with the inscription iPhone 6. The only thing that catches the eye — relief on the upper part of the box is in the shape of the front side of the smartphone. 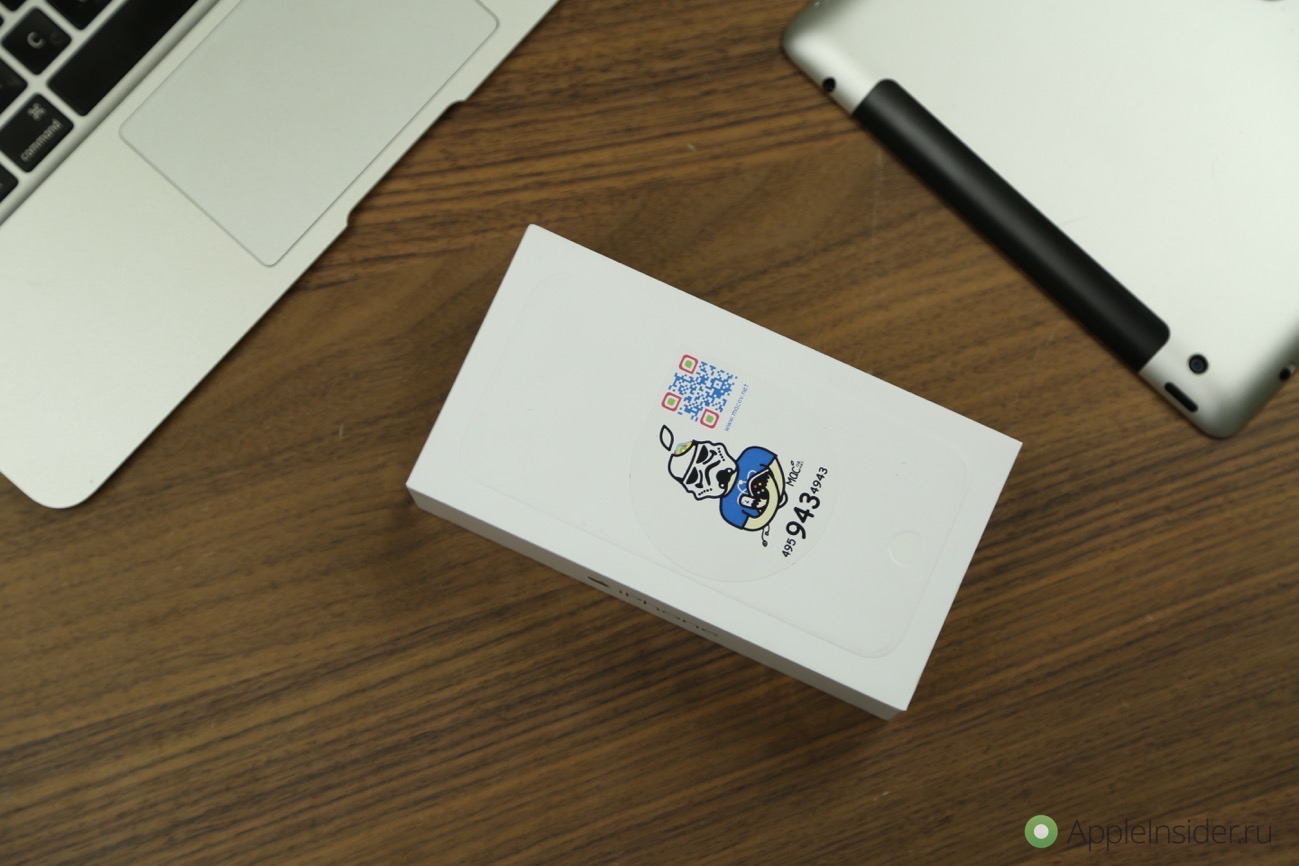 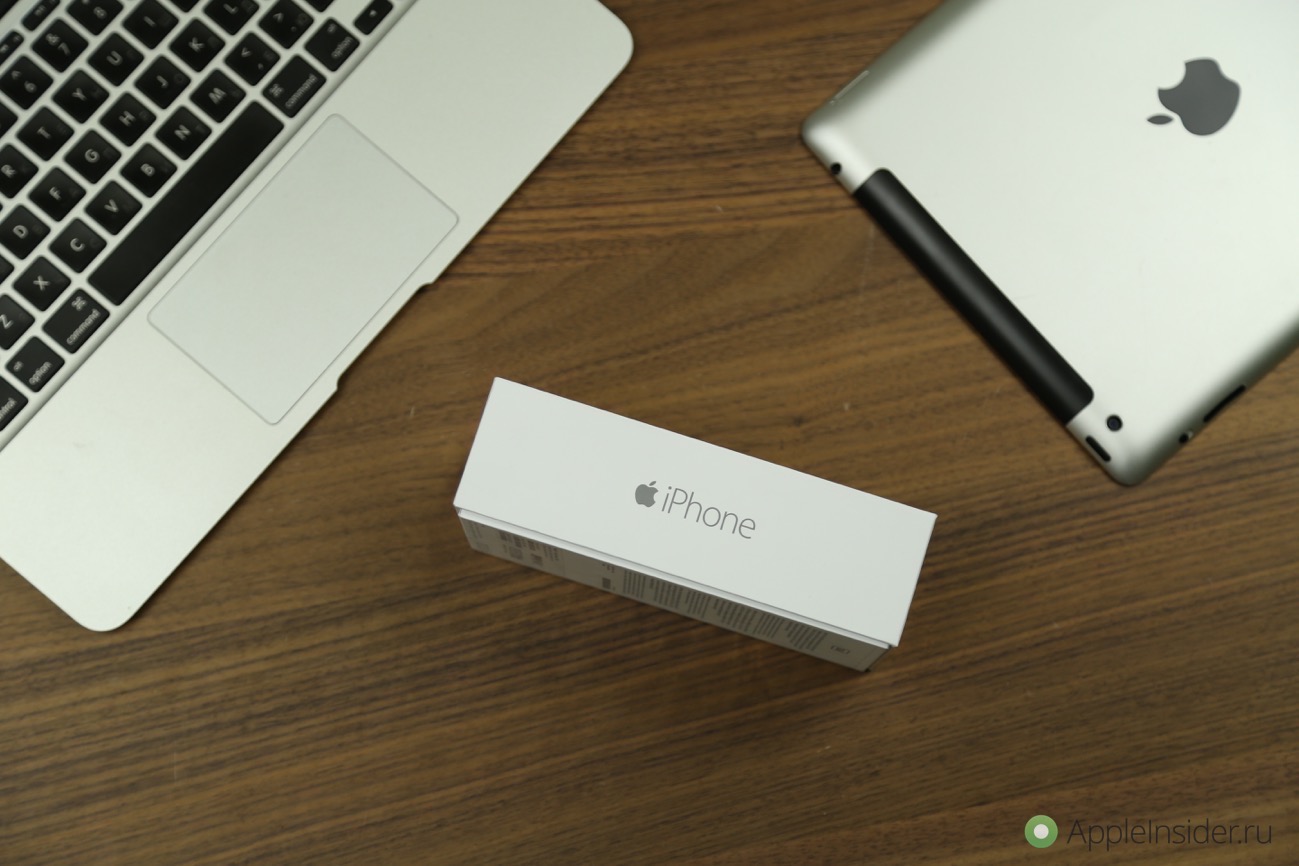 On the back of the box you can see whether you sold the phone you ordered. 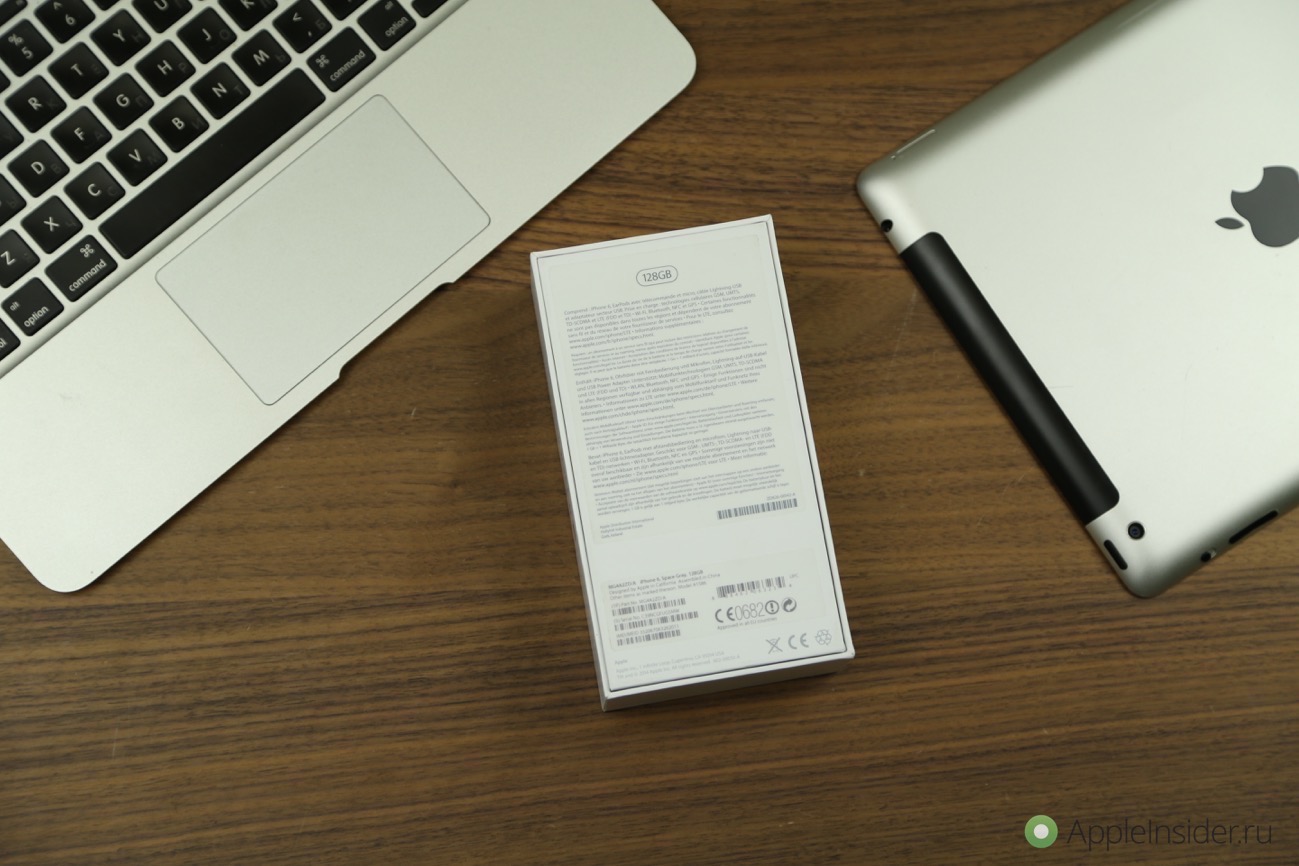 Trim smartphone standard envelope with a brief statement to the iPhone 6 (and whether it is necessary?) and two “Apple” stickers, headphones EarPods, charger with cable Lightning, and, of course, itself iPhone 6 — where without it. 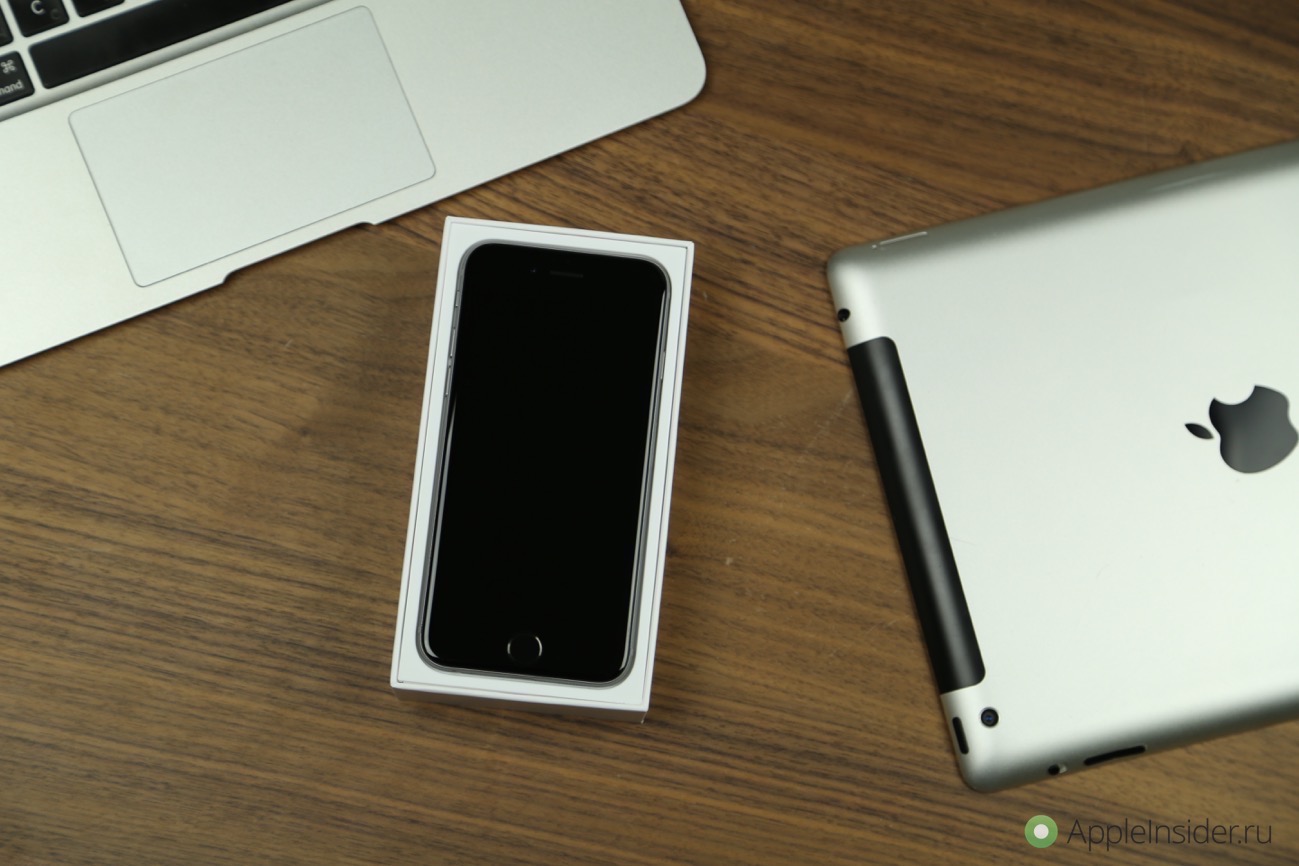 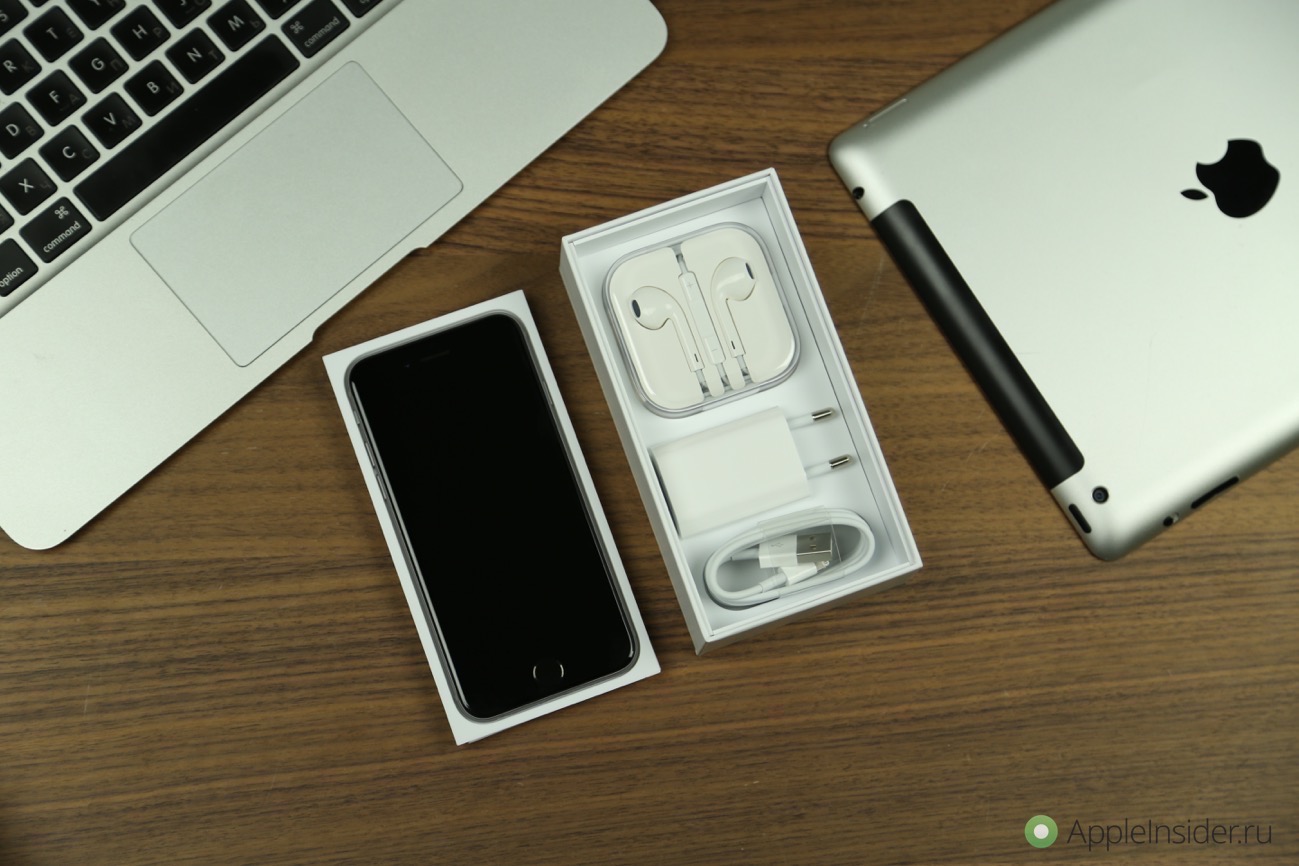 Proceed to the look of the smartphone.

The design of the iPhone 6 you can talk for a long time, with endless delight. The smartphone is incredibly thin — its thickness is only 6.9 mm Despite the fact that it weighs 17 grams more than the iPhone 5s, by reducing the thickness he felt in his hand no less comfortable. As my fingers fairly long, I can easily use with one hand. 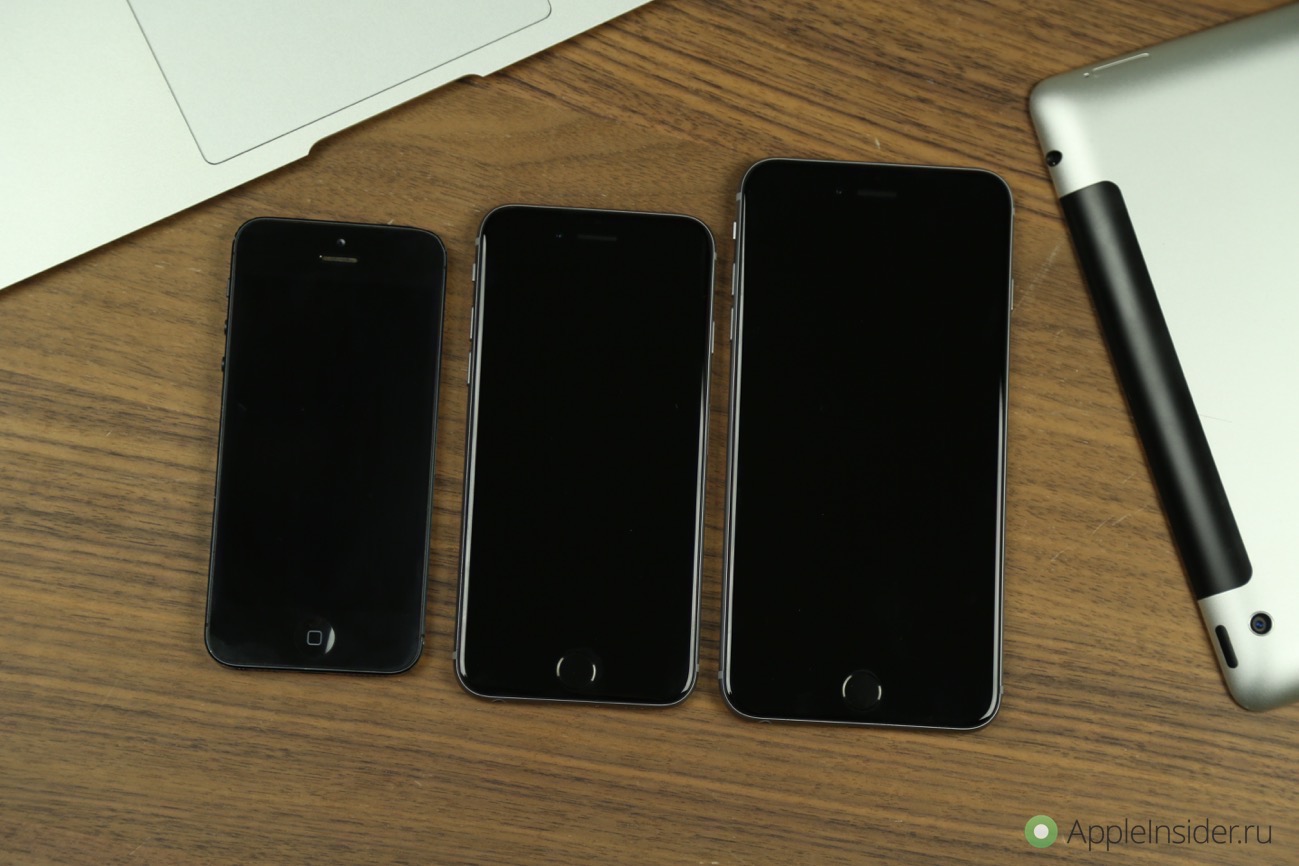 On the left side of the smartphone are toggle buttons volume (which became more noticeable), and the vertical rocker to mute the sound. On the right side we were met by a tray for SIM-card nano SIM and… the button lock screen and turn off iPhone. Yes, the iPhone 6 she moved with the top face on the side. Indeed, with a screen diagonal of 4.7 inches this decision seems to be the most optimal. 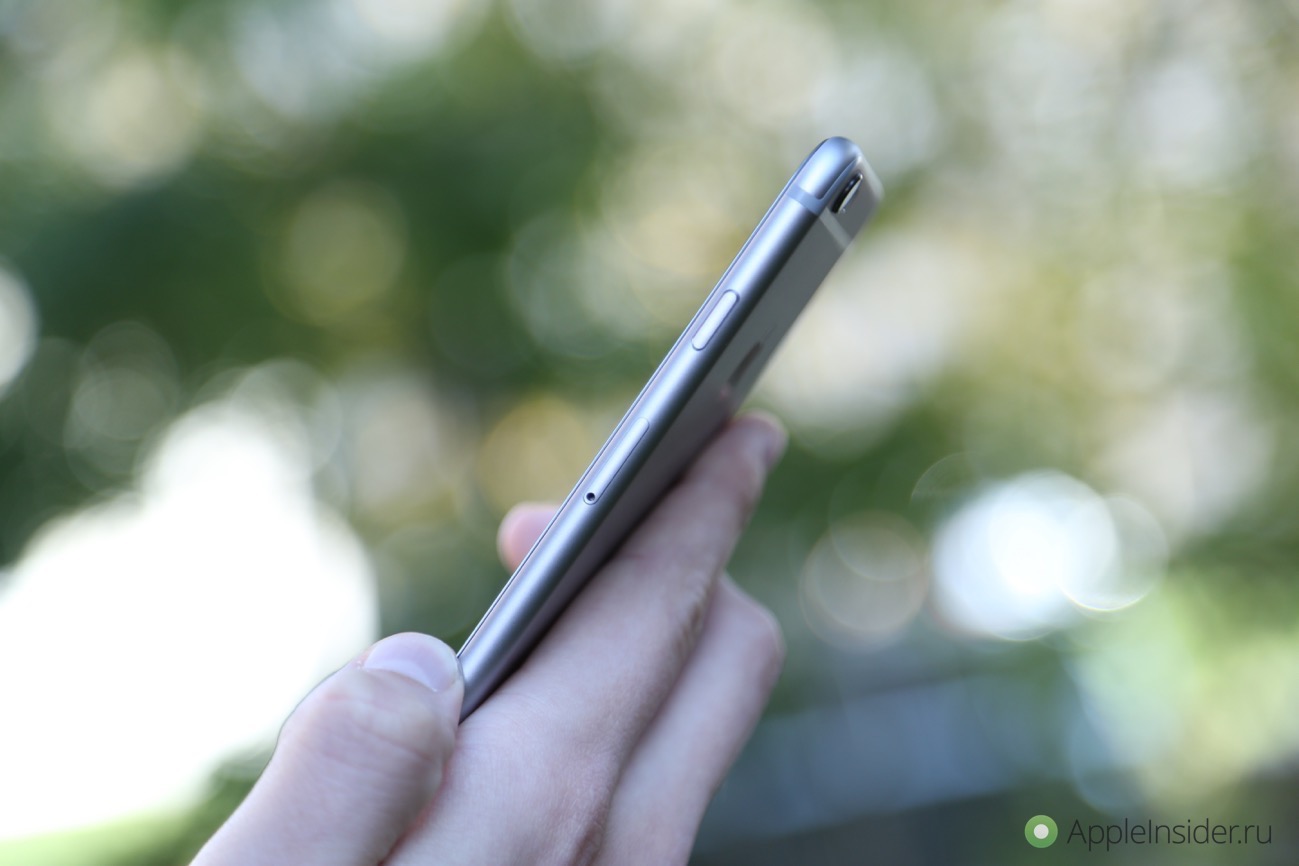 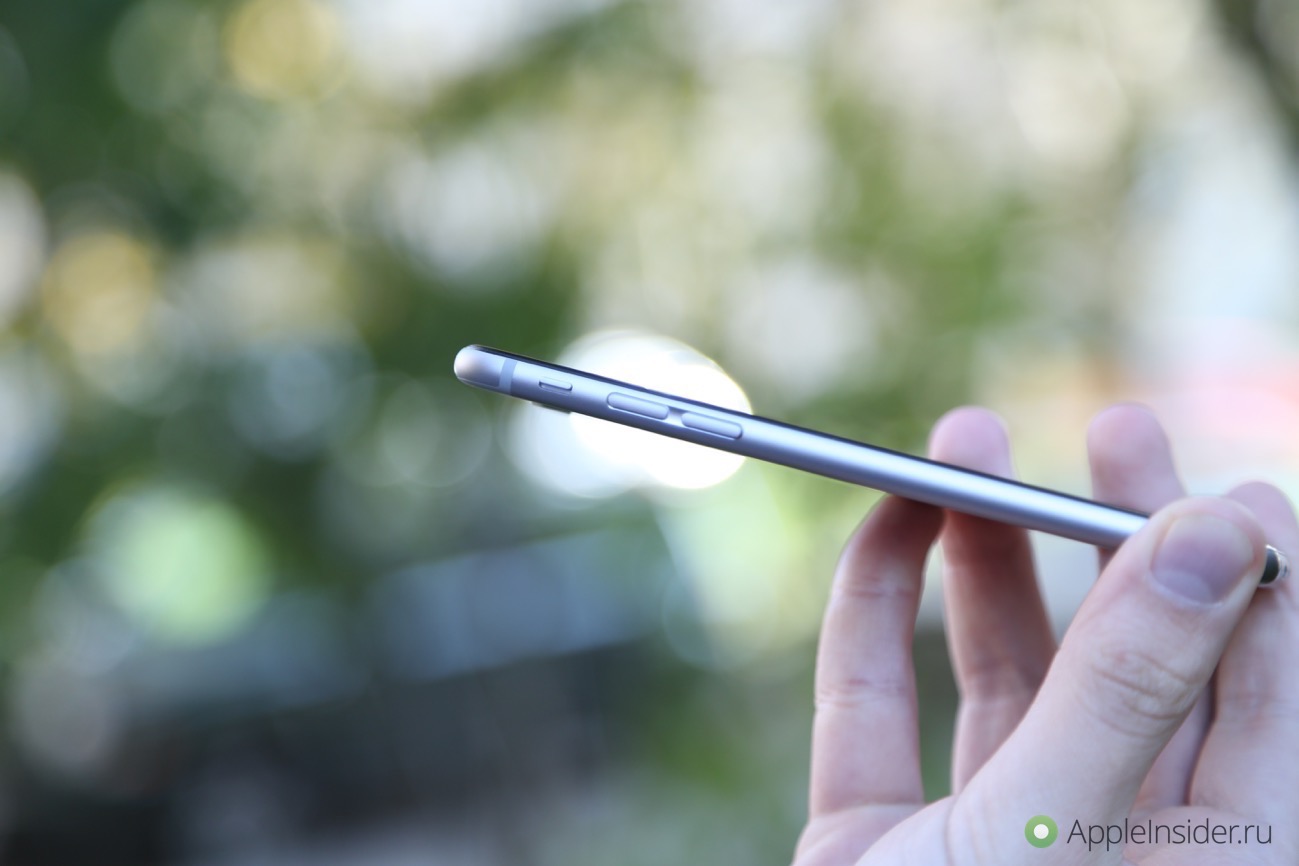 Rear panel iPhone 6 deserves special attention. Pleasant to the touch aluminum case does not release a smartphone out of the hands even for a second, and even barely perceptible bands can not spoil the impression of the device. The body seemed to have become more rounded compared with the iPhone 5 and iPhone 5s, although in fact it is not. 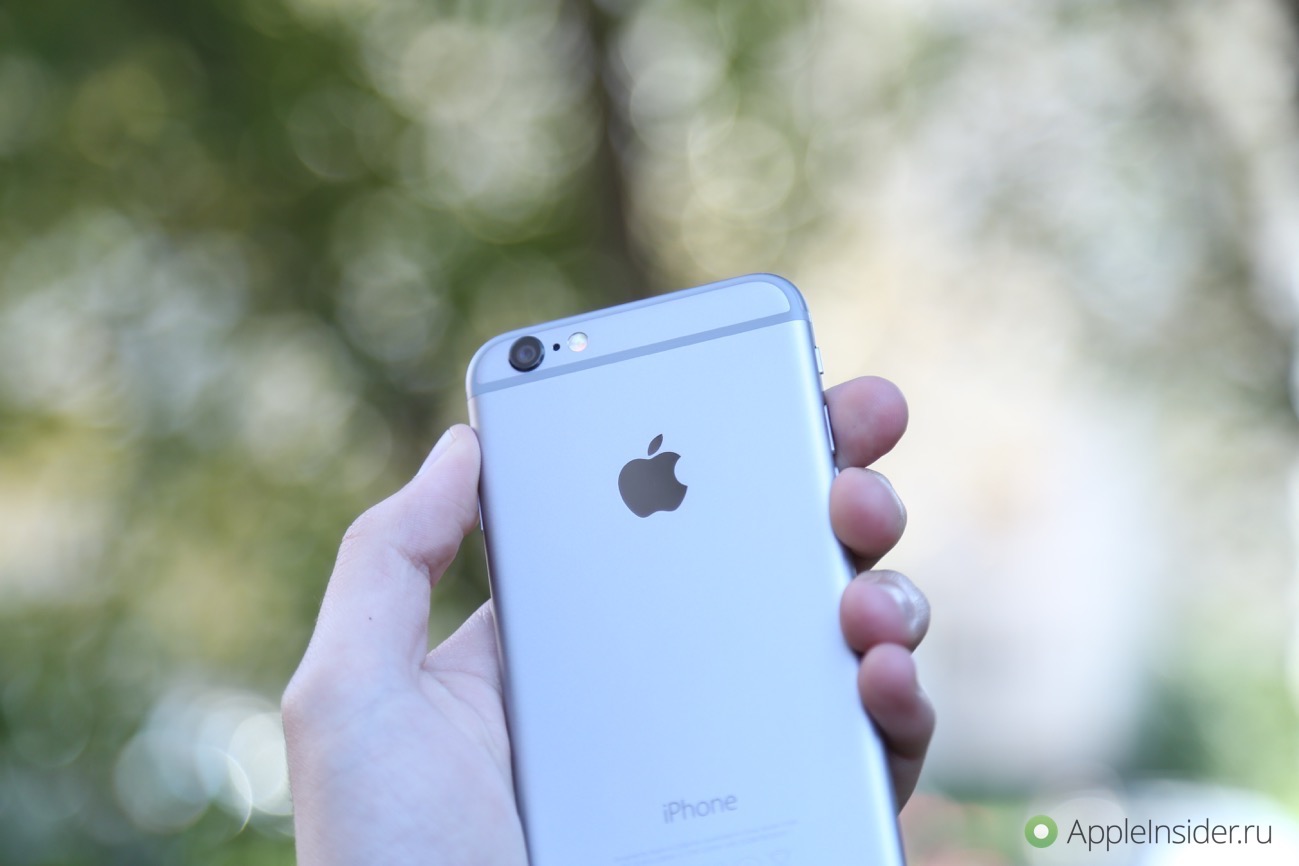 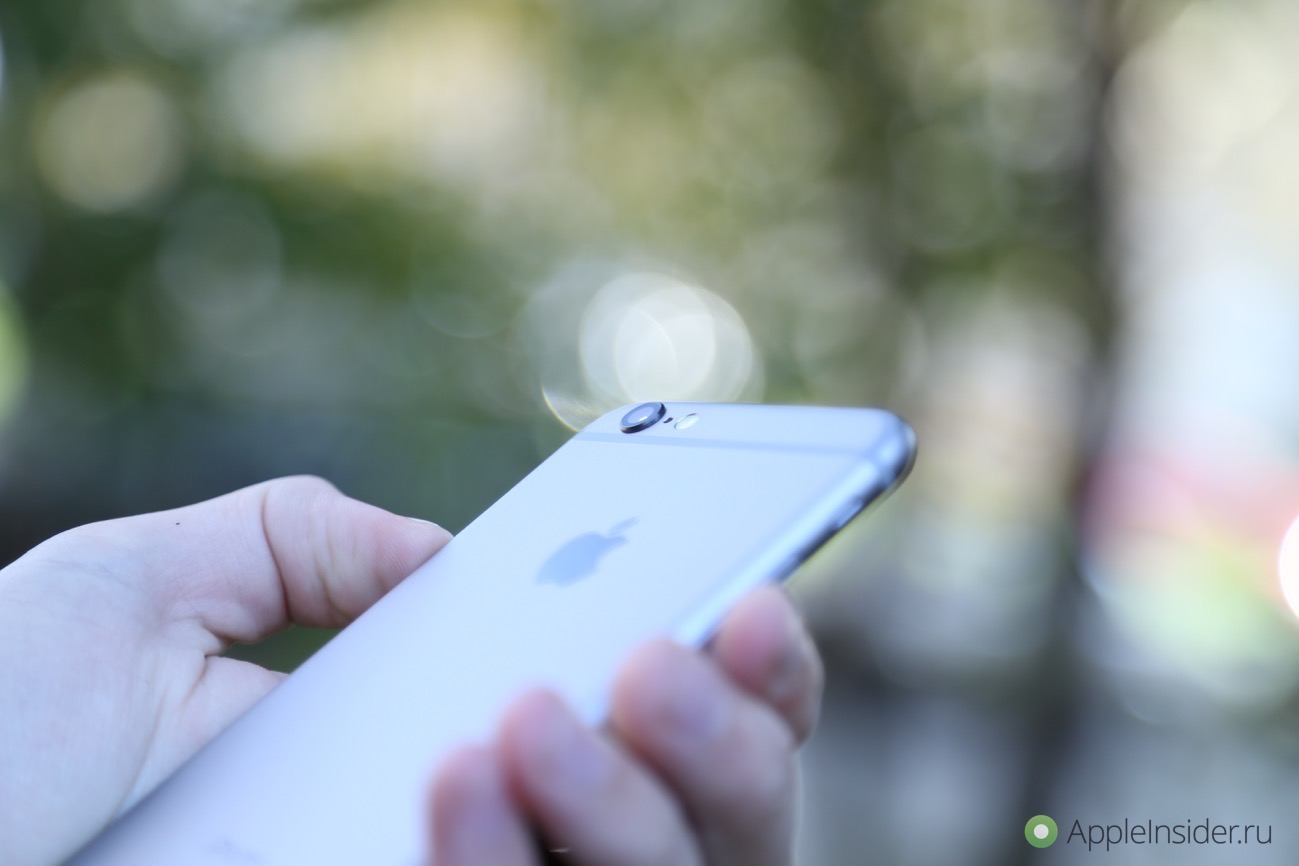 On the bottom of the device there is a place for the cable connector Lightning, 3.5 mm audio output and dynamics. 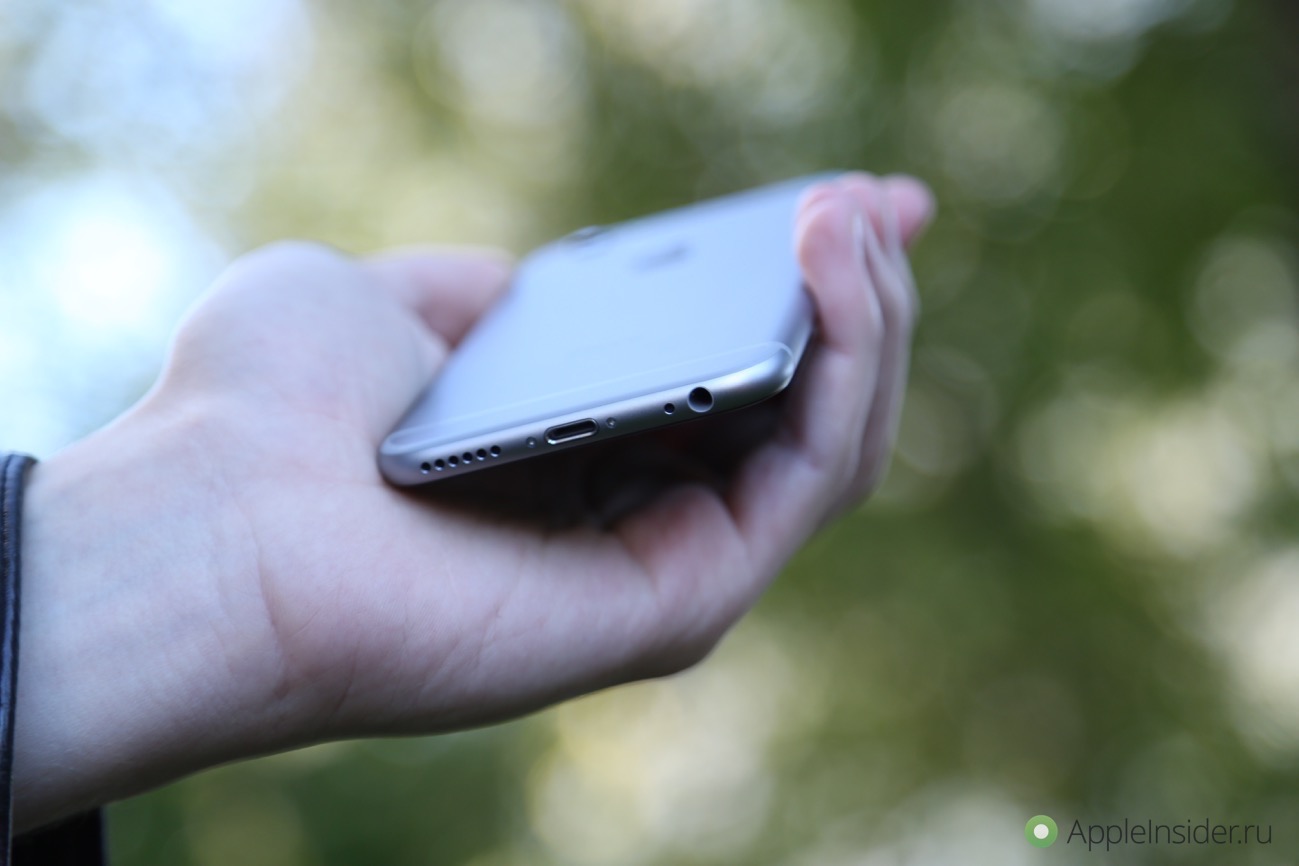 The protruding camera is what scared many (including me) fans of Apple, when rumors about her appearance was leaked. Yes, an 8-megapixel camera iPhone 6 extends slightly, but does not cause any discomfort to their presence. Moreover, she makes excellent pictures. But more on that later.

Dual LED flash, which can boast of iPhone 5s, the iPhone 6 is combined into one. If you look closely, you can see that it is divided into two parts, however, became more compact.

We deliberately made the screen of the iPhone 6 in a separate category. Unlike the iPhone 5s, now if he merges with each of the side faces. The distance between the edges of the screen and the side faces has also become slightly smaller, although this can not be overlooked. 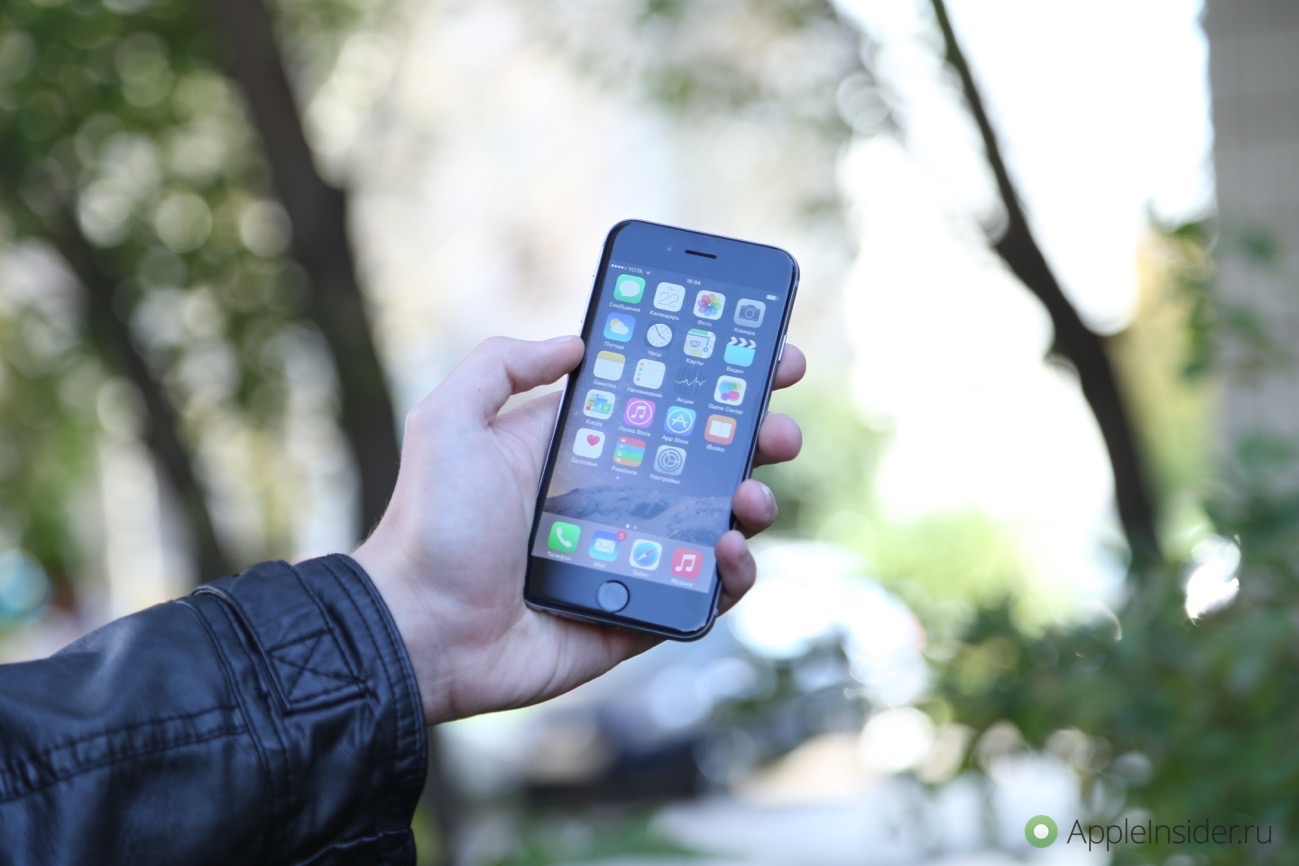 4.7-inch HD Retina display smartphone has a high contrast ratio 1400:1, resolution 1334×750 pixels with 326 ppi (pixels per inch). Also it is equipped with two-shift pixels to expand the viewing angle and the ability to scale the screen by double touching the Home button.

The color of the screen will not leave you indifferent. Pictures and images are incredibly vibrant and the text in the browser or books iBooks very clear and pleasing to the eye. 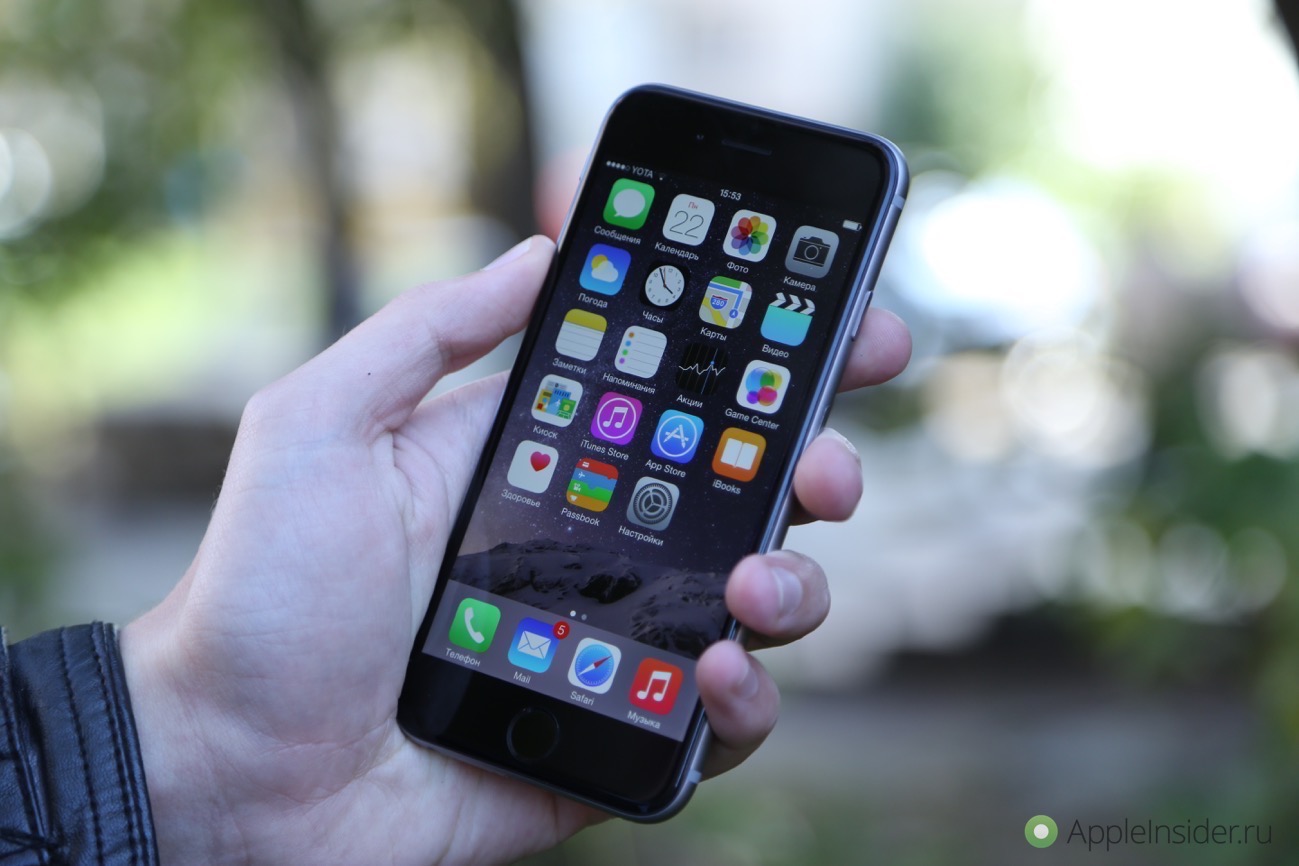 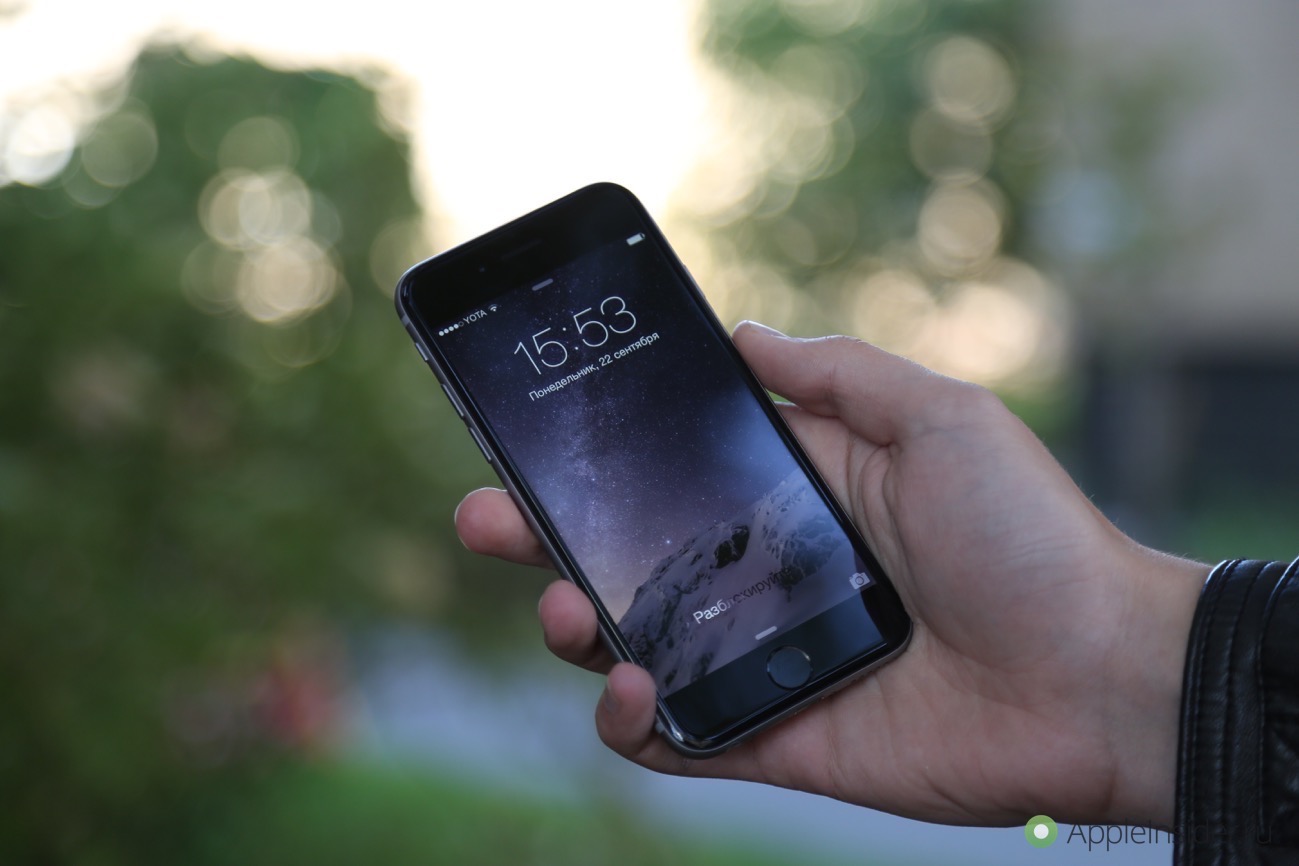 To familiarity with the appearance, it is worth noting that the iPhone 6 feature a fingerprint scanner Touch ID after updating iOS 8 can be used for authentication in third-party applications. 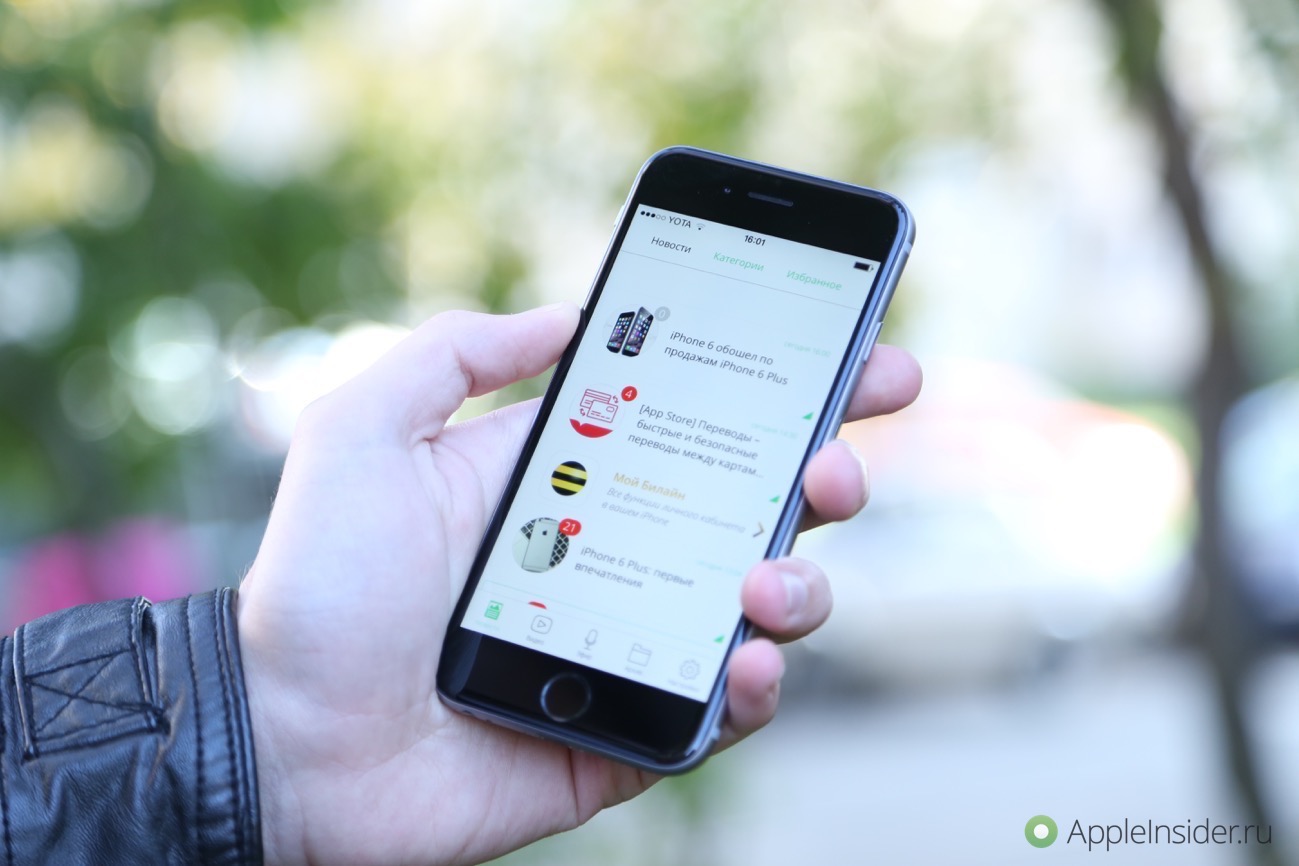 iPhone 6 running A8 processor with 64-bit architecture and M8 motion coprocessor. Like the iPhone 5s, the smartphone is also equipped with 1 GB of RAM. One of the main differences of the device from its predecessors is the presence of the long-awaited NFC chip. However, so far only for making payments using a payment system, Apple Pay.

Pleased with support for Wi-Fi standard 802.11 ac — thanks to her smartphone gave this result the speed of the Internet, which was not even dreamed my iPhone 5. 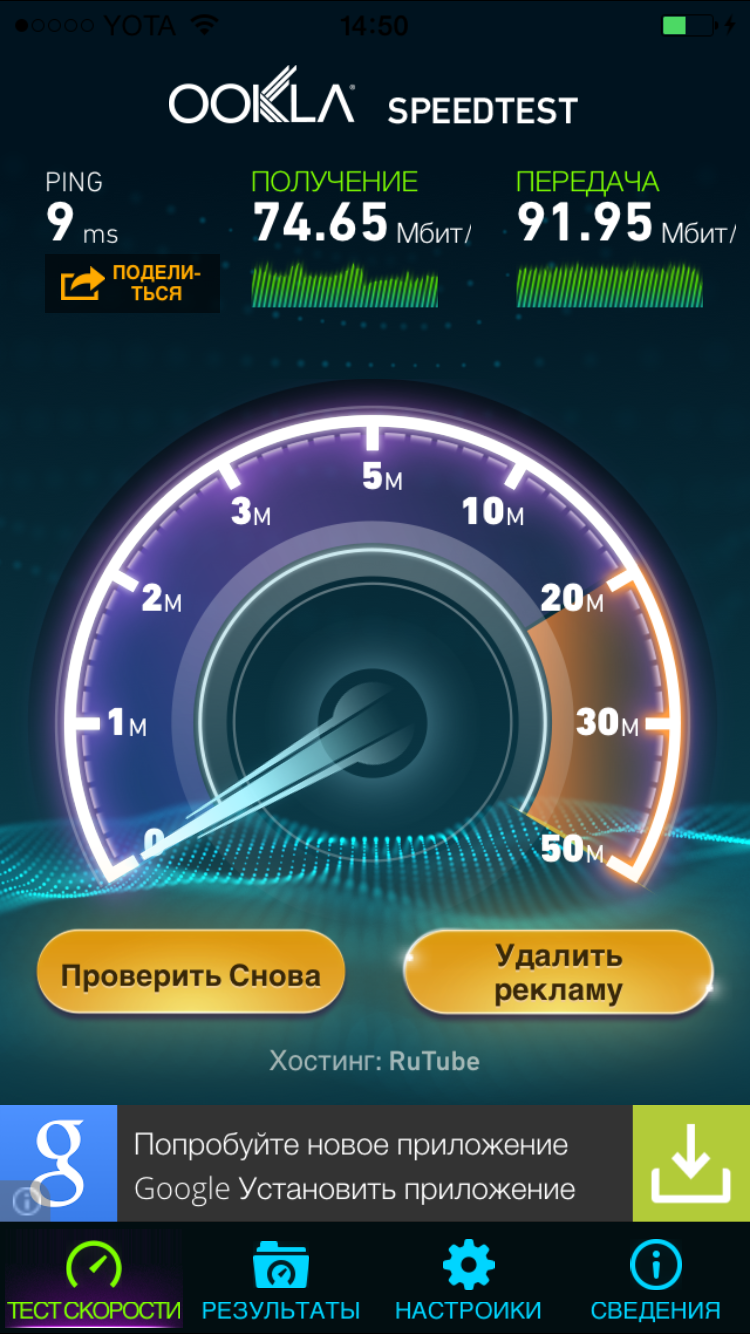 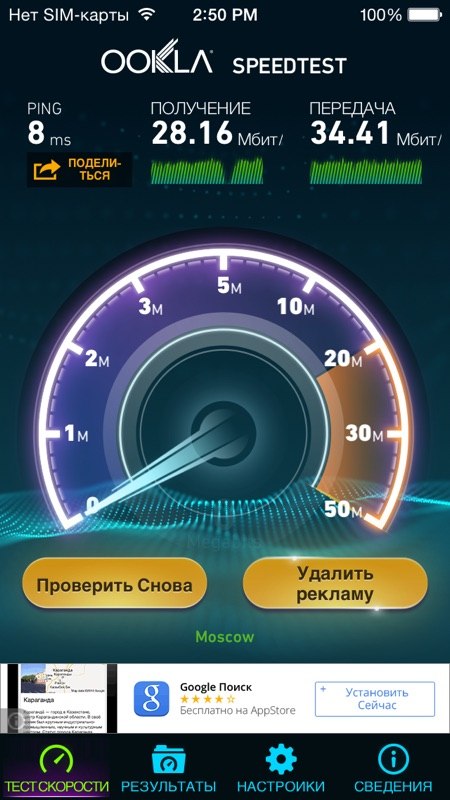 In addition, among wireless standards — LTE (which works in Russia), Bluetooth 4.0, GSM/EDGE, UMTS/HSPA+ and GPS/GLONASS.

In performance tests GeekBench 3 iPhone 6 was just fine for a dual core A8 processor with a frequency of 1.39 GHz is quite a good indicator. 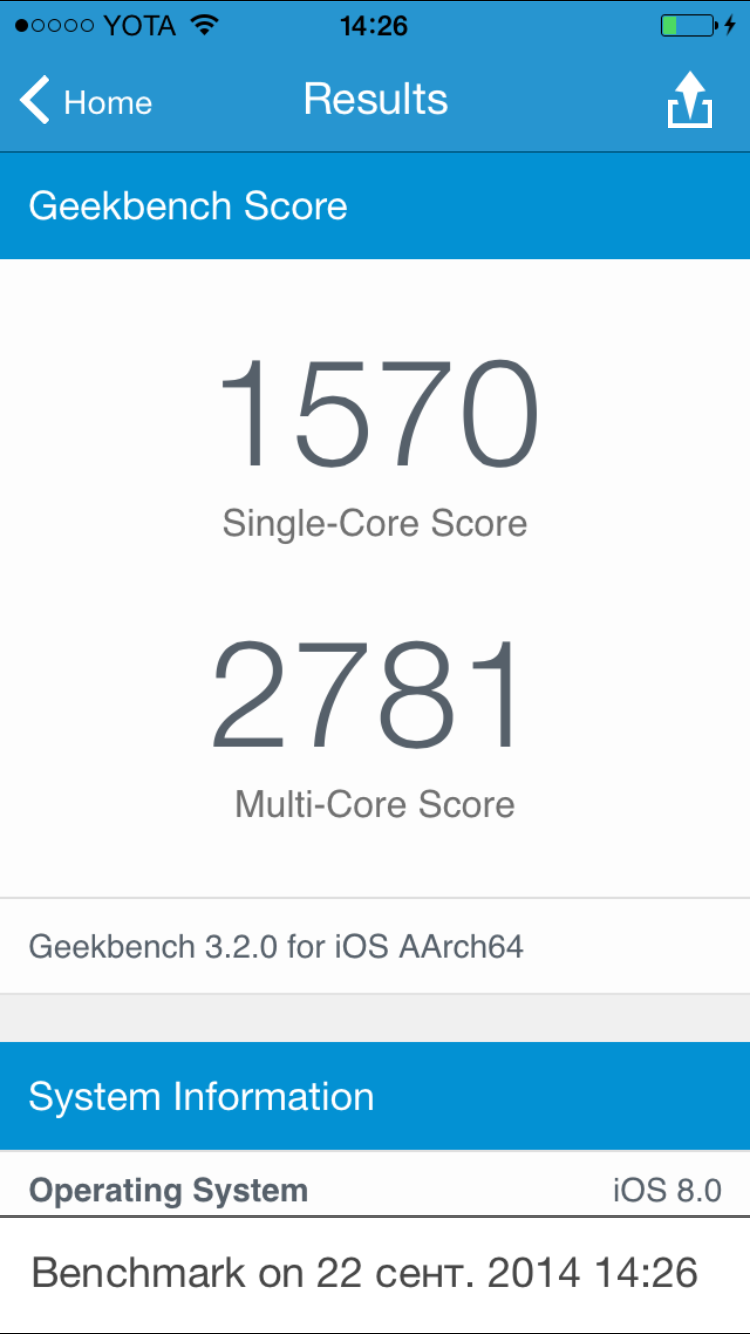 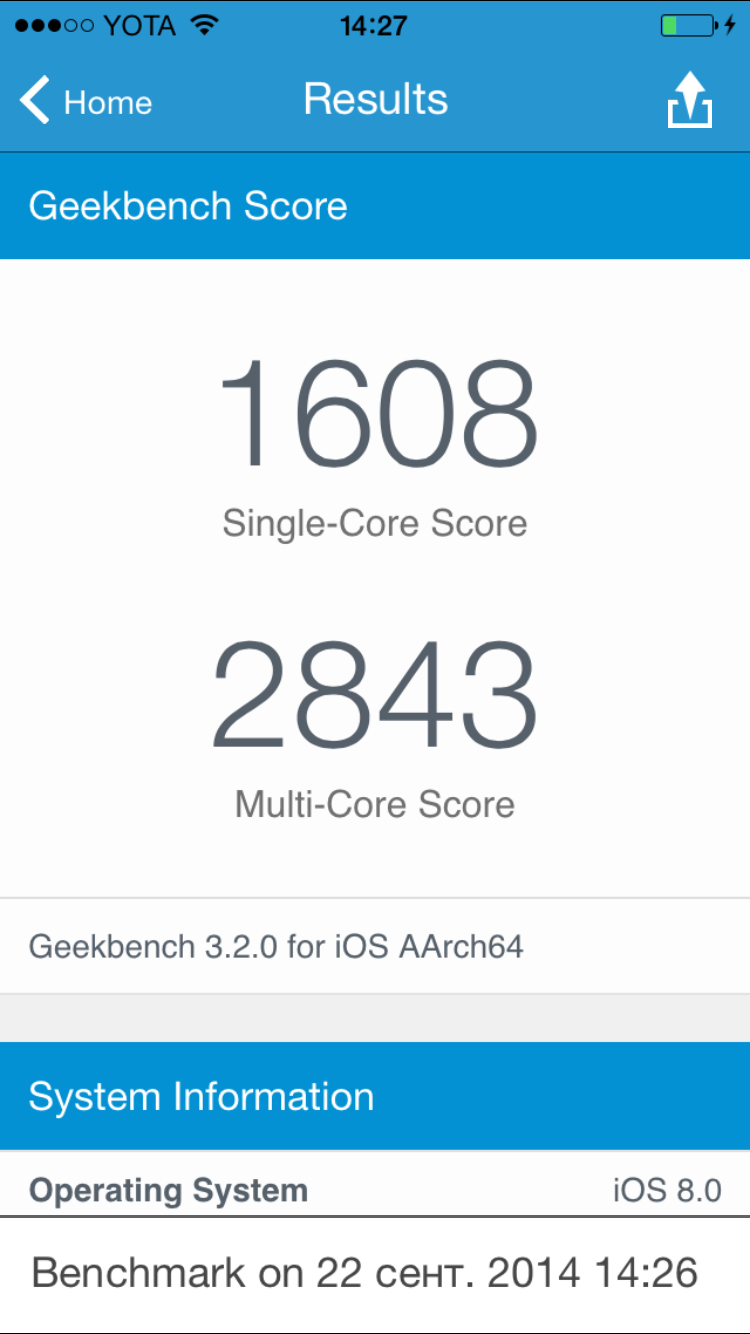 The camera of the iPhone 6 now can shoot slow-motion video at either 120 fps or 240 fps, has a tracking autofocus, and shoots HD video at 1080p at 30 or 60 fps. Yeah, with such equipment fashion house Burberry can easily shoot your next show on only the iPhone 6 or iPhone 6 Plus.

Thanks to the technology of Metal, which is responsible for dramatically improved graphics and smooth frame specially adapted games on the iPhone 6 just “fly”. No freezes (even on iOS

at the time of testing was observed. 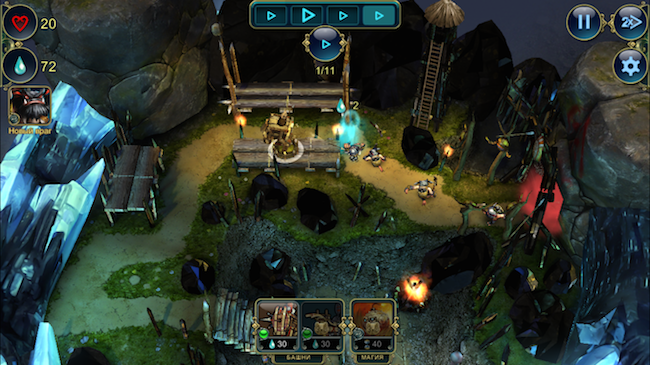 About the main advantages of iPhone 6, we told you, but the smartphone is also not devoid of some drawbacks. First, the device is equipped with 1 GB of RAM, which by the standards of modern smartphones is quite small for a full and fast work. Secondly, the capacity of the battery of the smartphone barely exceeds 1800 mAh, which is 300 mAh more than the iPhone 5s. And this despite the fact that the screen is much larger. For comparison, the battery capacity of the iPhone 6 Plus almost reaches 3000 mAh.

It so happened that the visible plus iPhone 6 was also his Achilles heel. We are talking about rounded smartphone screen around the side faces. It all looks perfect, however in the case of falling gadget on the side or the screen down, you can immediately carry it to a service center.

In General the iPhone 6 got a great smartphone for reasonable money — Apple has once again proved that she remains the leader in the smartphone market. And when you consider that in just the first 24 hours the number of pre-orders for iPhone 6 and iPhone 6 Plus reached four million units, they will be popular. 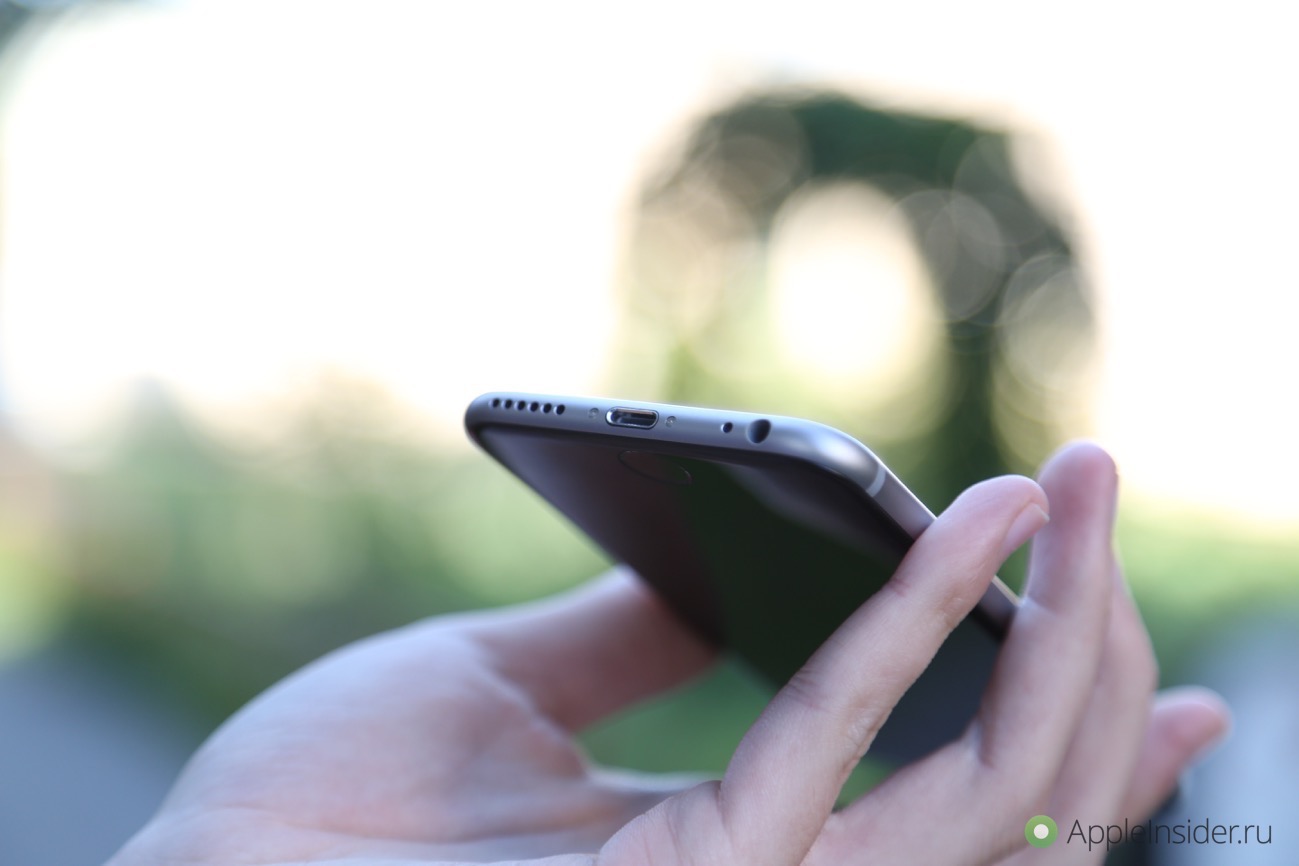 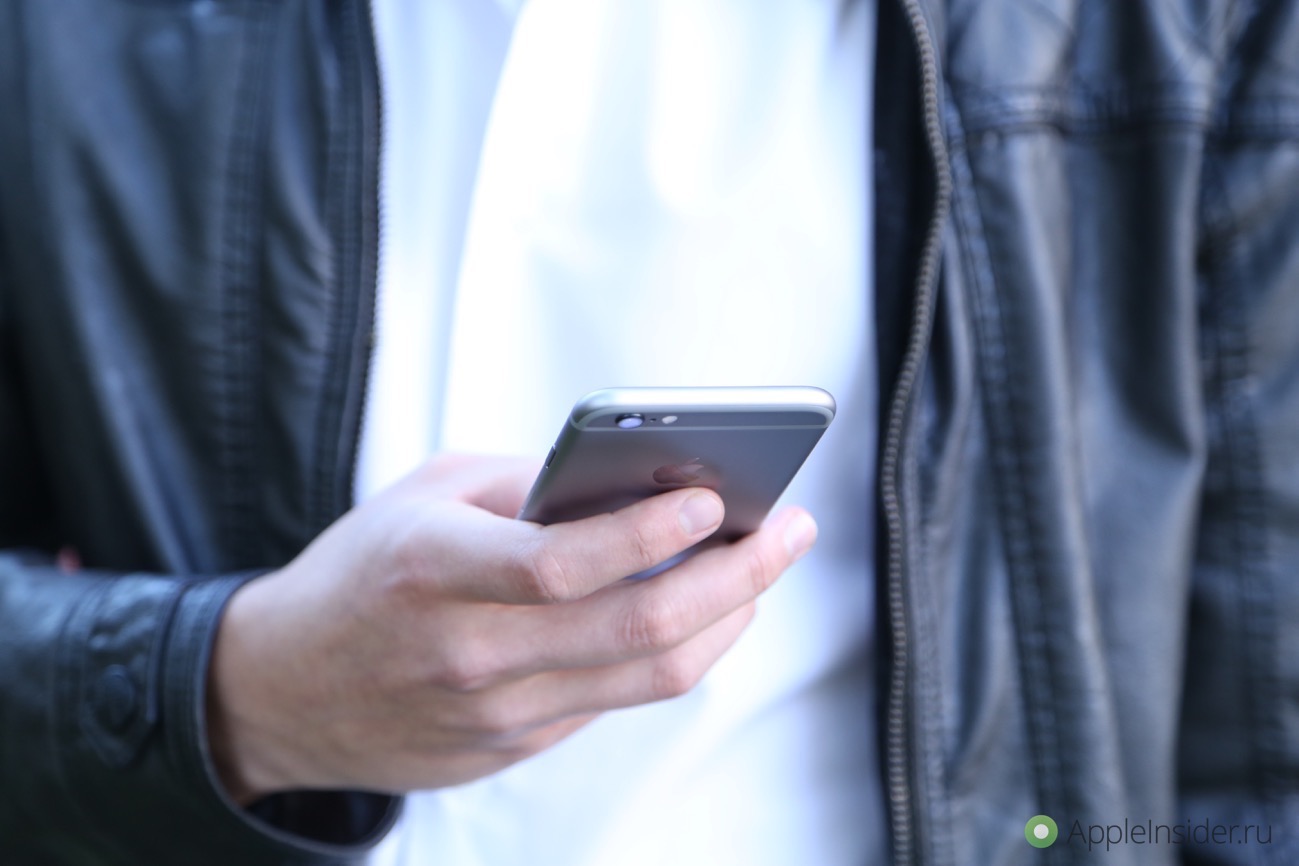 We would recommend you to buy iPhone 6 in two cases: if you think iPhone 6 Plus “shovel”, and if you do not have enough 4-inch iPhone 5s screen. Owners of the iPhone 5 and earlier models update, as they say in Apple strongly recommended. 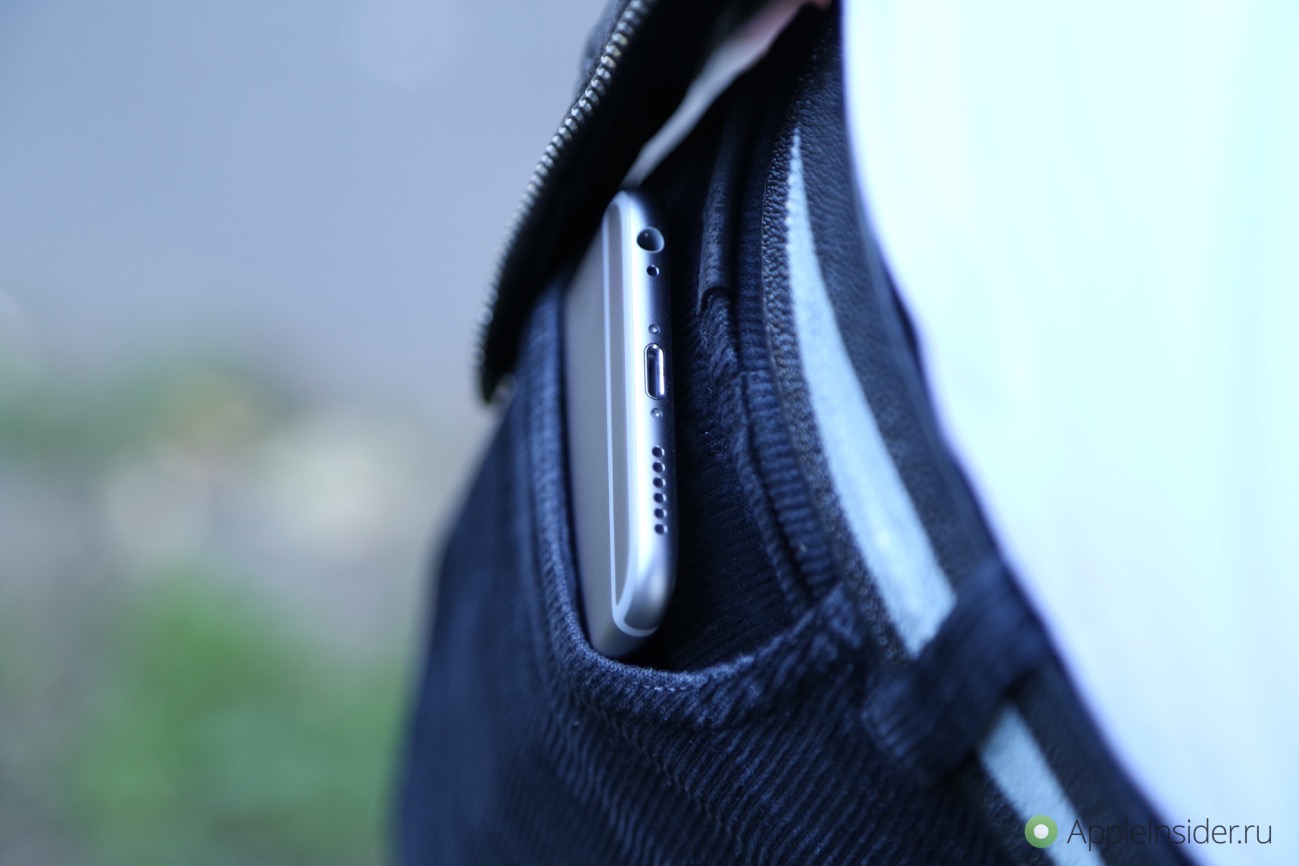 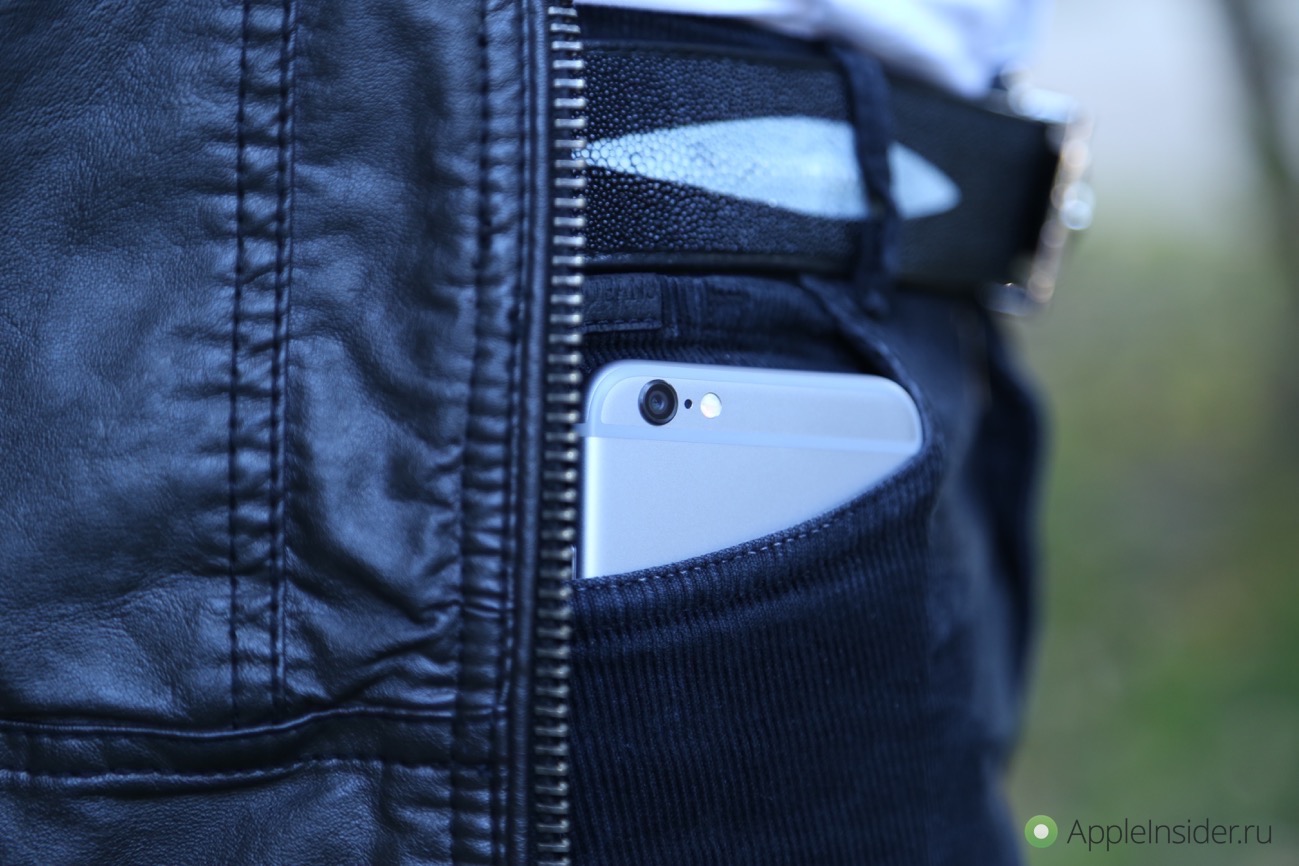 We thank the online store Macov.net for courtesy to review iPhone 6. To purchase a smartphone you can on the official website of the store. Not go on the queue review iPhone 6 Plus!