iPhone 6s is the fastest smartphone on the planet? 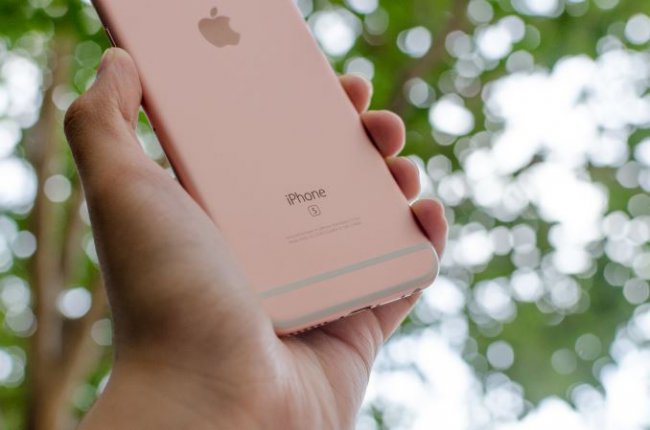 Remember how the iPhone 6s processor crushed the competition in the first round? Well, it is time for the next battle. Who is the best among the best product or aggressive marketing, as is persistently reiterated by inveterate skeptics? Let’s find out.

Since time immemorial, the mobile industry is accustomed to measure their own success in megahertz and gigabytes. A little later the ideals of the market added the MP, and after a while — and known by world PC the number of cores, CPU and GPU. Stamps of various hues vying competed in the numbers, quickly realizing the beauty of this marketing strategy. Gradually, the audience imbued with this ideology, and the newly minted experts agree in countless battles on the vast world wide Web, where everyone has proved that this set of characteristics — the crown of creation in mobile technology.

Apple explicitly distances himself from these “races”, preferring, on the advice of Steve jobs, head to work. Despite repetitive criticism, which regularly generates such an approach, the success of Cupertino in this field prove conclusively: not a single number. However, some figures in the Apple love, and it’s not even carefully checked the data, which Tim cook shows off the presentations. It comes to test results — the indicators “economic conservatives” from Cupertino each year, give a solid kick to the opponents. Was no exception and the current season, and this time more seriously.

Thematic Anandtech, regularly conducting testing of new gadgets, recently shared a very interesting information. The fact that the new iPhone probably is not typical for the segment, eMMC, and much faster. Specially for this purpose, the engineers adapted the memory controller, previously used with SSD in MacBook, for use in a mobile device. But that’s not all: to ensure proper operation of the component in the Apple smartphone is equipped with PCI-E and the new NVMe interface, which replaced the outdated AHCI and designed specifically for SSDs. Despite the fact that at the conference, Flash Memory Summit about the benefits of such solutions have already been told by the Sandisk, there is nothing like it on the mobile market. 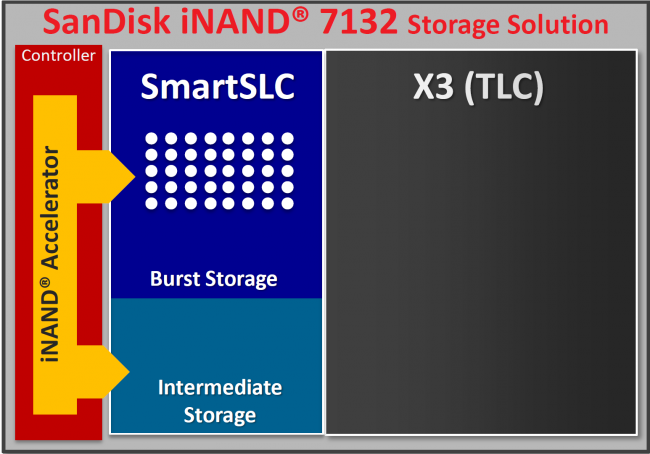 As for the memory, experts Anandtech managed to find mention of it in the system files of iOS. It turned out that in the iPhone 6s installed hybrid SLC/TLC NAND flash-module, close to the characteristics of “Board” 850 EVO from Samsung. Are these solutions very efficiently: to compensate for speed reduction on TLC NAND, the drive first writes data in the special SLC cache. As long as the total bandwidth does not exceed the capabilities of TLC, the bandwidth is determined by the speed of the cache, which is sufficient in most cases. Let’s see how this works in practice.

Who on light of all faster

For the evaluation of internal memory was used StorageBench application that performs a sequence of (fragments of 256 KB) and random (4 kilobytes) the record on the drive. 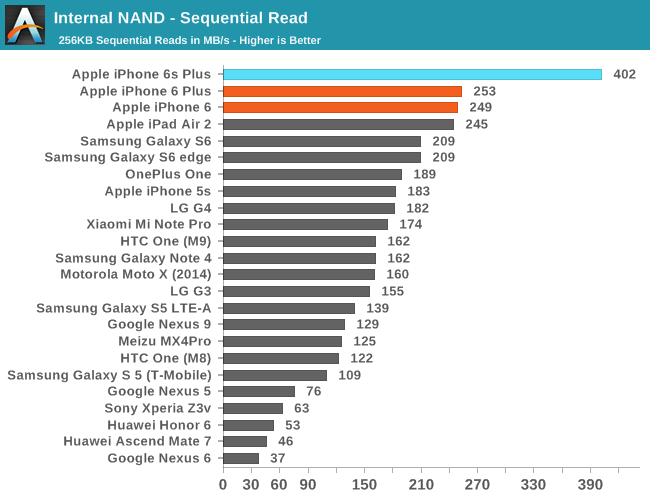 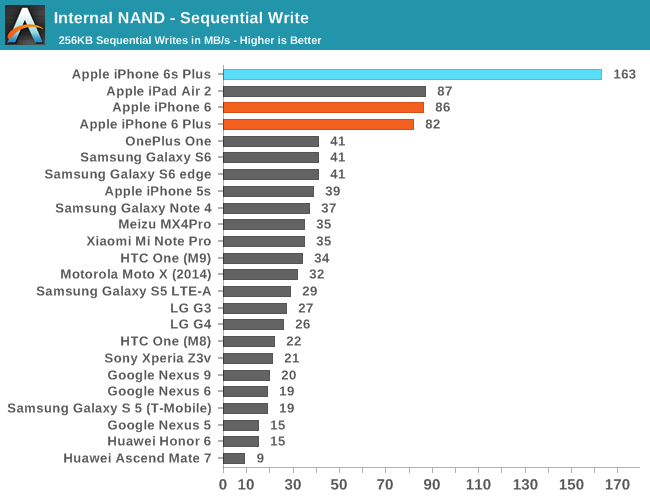 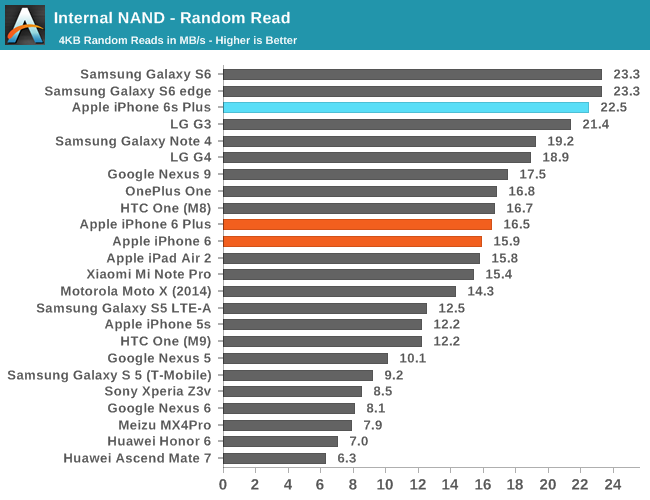 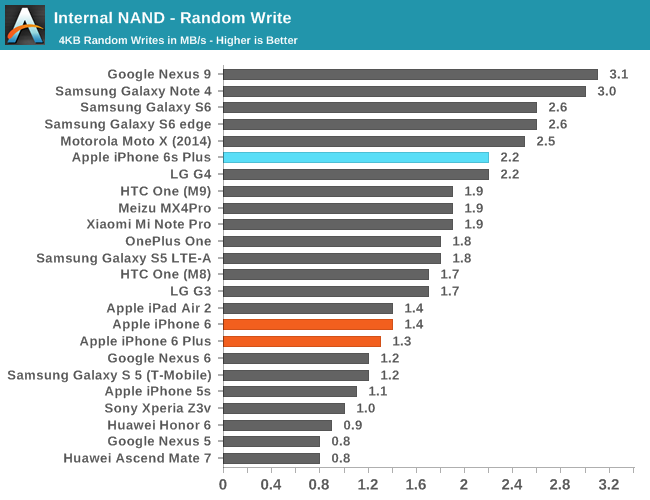 As you can see, the iPhone 6s with a significant lead in sequential write speed. The random algorithm, at first glance, demonstrates more modest results, however, it is necessary to consider the depth of the queue equal to one. This limitation is a “bottle neck” of this test; in fact, Apple managed to fit in a smartphone extremely productive memory.

Let’s move to browser-based tests. Here are the results of the Kraken, Google Octane, and WebXPRT. 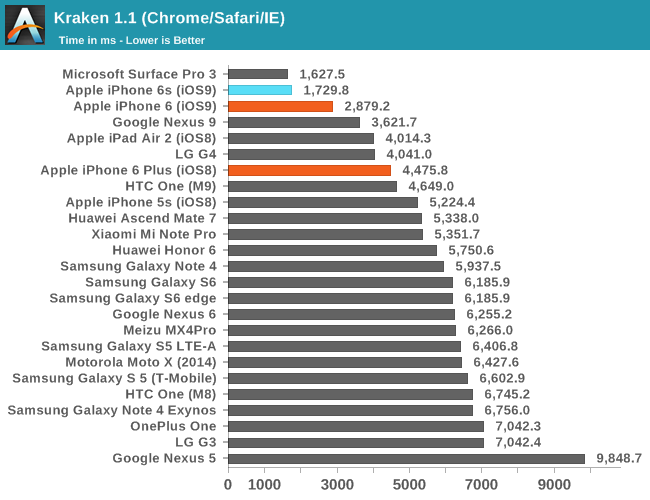 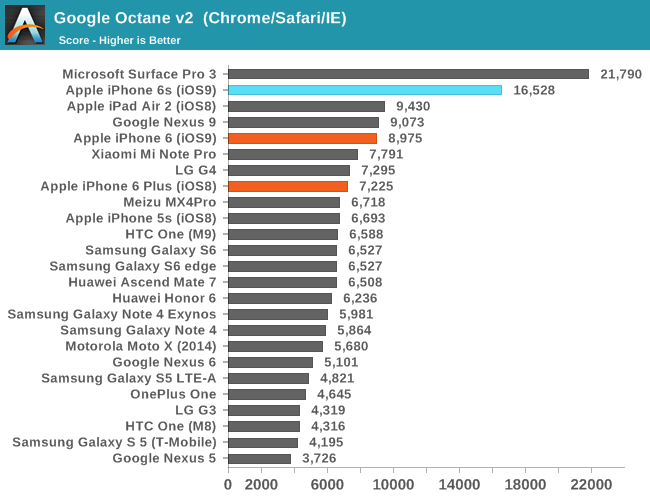 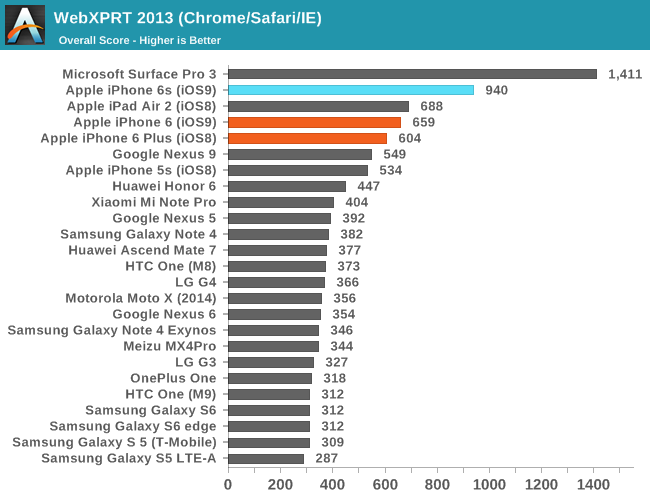 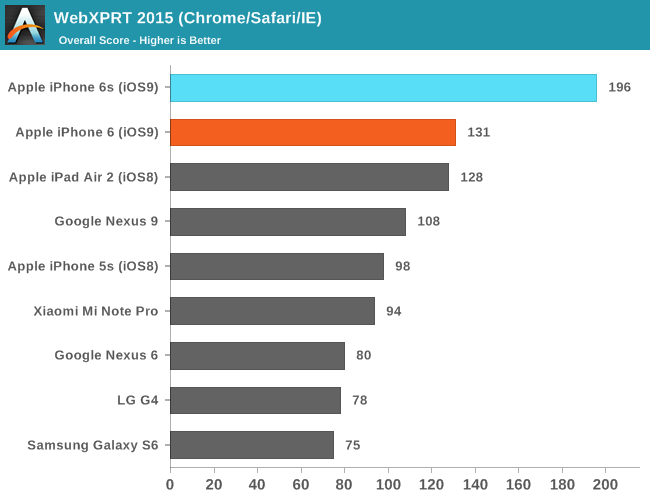 Remarkable is not even the fact that the machine seriously outperforms its predecessor the iPhone 6, it is to be expected. But they occupied the second line in the first place with an insignificant separation got such a “monster”, as Microsoft Surface Pro 3 is very impressive. Of course, a real browser performance will depend on proper optimization and a more accurate estimate for solutions on different platforms will not hurt to test the native apps, but the smoke without fire does not happen.

It is time for the classical 3D Mark, reflecting the performance of the graphics subsystem. Here, except for Physics test, everything looks exactly the same: the iPhone 6s is inferior to that proverbial Surface. Closest rival gadget — Xiaomi Note Pro, need to pay tribute to the Chinese brand for a very good solution. Overall modest performance of iPhone in “physical” test can be explained relatively modest same frequency, as is the case when they are pivotal, but the progress of technology is obvious: the graphics accelerator A9 is almost two times faster than the fellow that is installed in the iPad Air 2. The lead last only a few modes GFXBench. 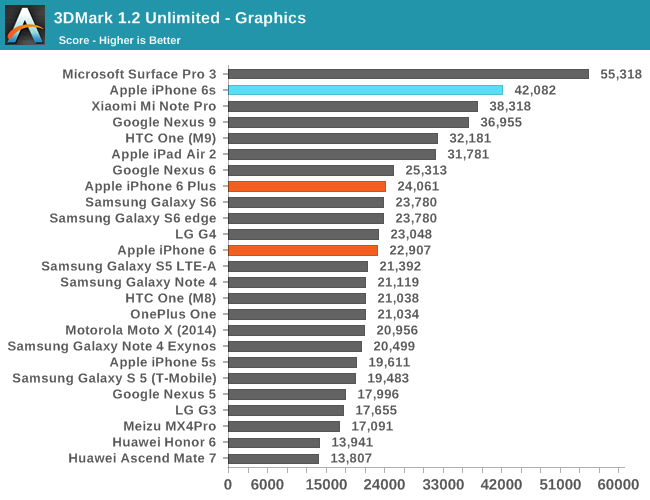 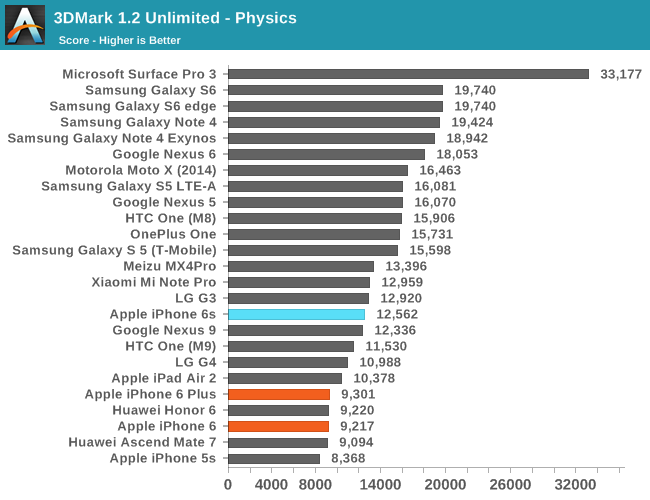 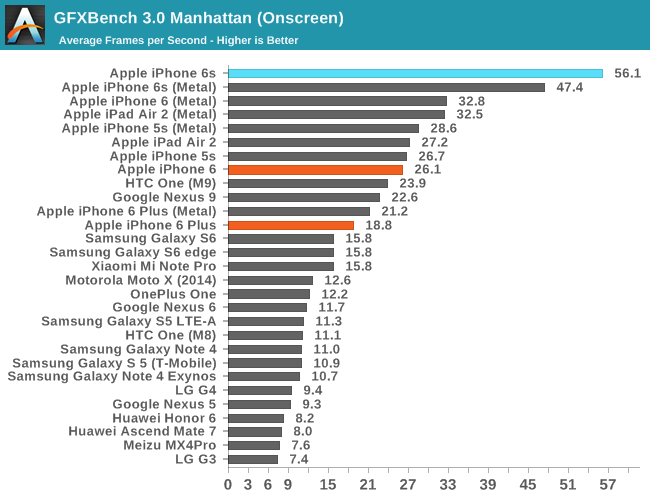 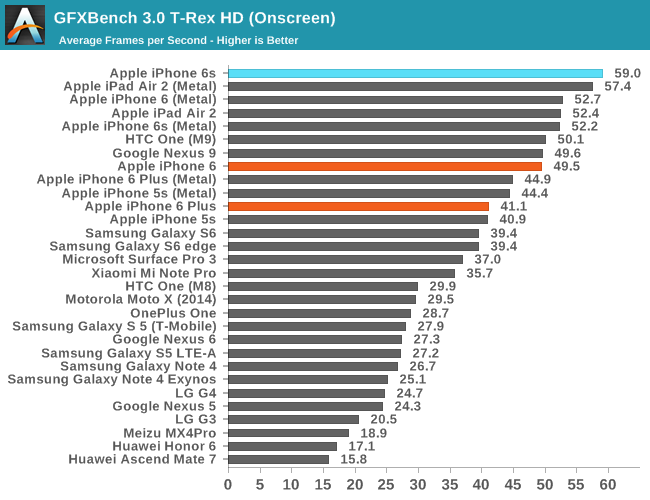 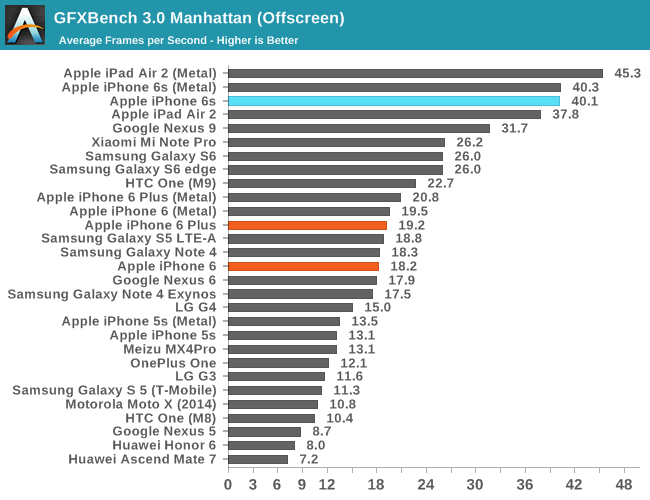 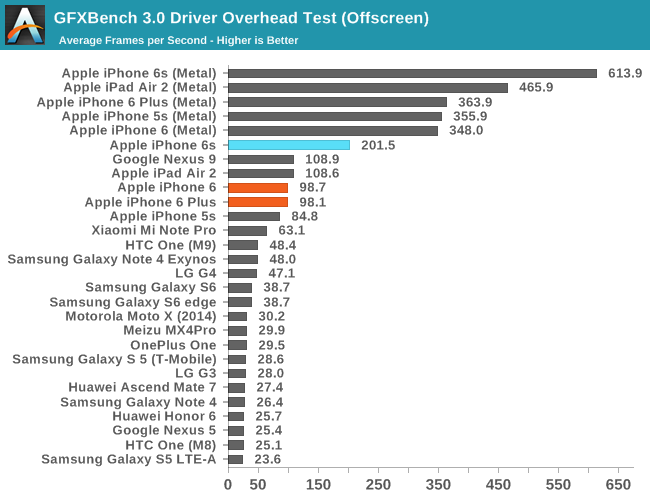 According to the results, we can safely say: the new generation of iPhone is one of the fastest gadgets of today. In combination with deep hardware and software integration that provides iOS (anticipating a wave of criticism), used in devices solutions “Apple” smartphones to lead confidently in most “races”, and debugging system having the property to get better over time, this advantage will become more obvious. Again, to speak “for all Odessa” is still early, but there’s no question: Apple has done a great job, and concerns about a small number of changes can be considered unfulfilled. However, as always.