Enthusiasts from the project PhoneBuff decided to compare the performance of two flagship competitors on various mobile platforms — Samsung Galaxy Note 7 and iPhone 6s Plus. In the experiment used synthetic benchmarks: the purpose of the experiment was not a comparison of the technical specifications of gadgets. Most importantly for the average user — how does the smartphone in everyday tasks. 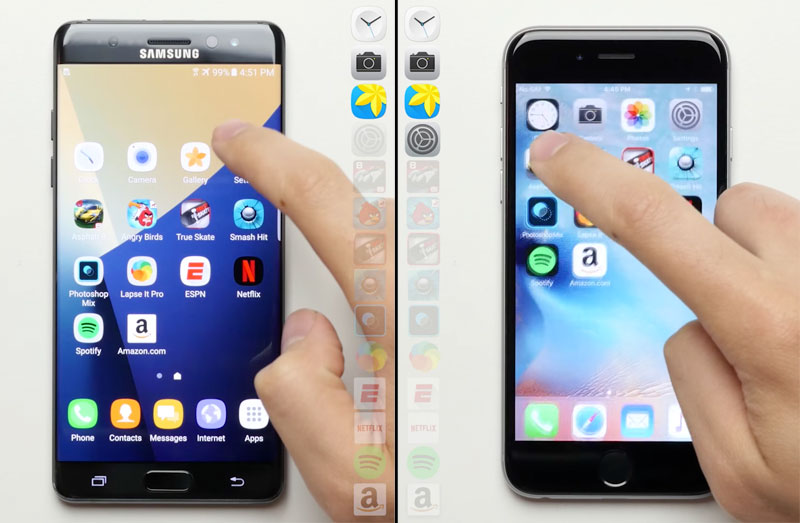 During testing of the two devices they alternately opened the same set of programs, ranging from “Camera” and “Photo” to third-party game projects. To evaluate the effectiveness of work in the background, in PhoneBuff all applications opened, twice in a circle.

In the first seconds it is noticeable that the iPhone 6s is on a par with the Galaxy Note 7. However, as soon as it comes to games, “Apple” of the device immediately taking the lead. Lagging Samsung Galaxy Note 7 increases dramatically when you try to create a movie in mobile photoshop. iPhone 6s seconds coped with the renderer and passed to the next application, while the Korean man thought for a long time.

the iPhone 6s has already gone on the second circle (here the applications run from RAM) when the Galaxy Note 7 has just completed the installation video. In the end, when the Apple smartphone fully tested, the South Korean flagship just finished the first round (!). This is despite the fact that the Samsung gadget comes with 4 GB of RAM vs 2 GB on the iPhone 6s.

The results of the experiment, the iPhone 6s passed the test in 1 minute 51 seconds, the Galaxy Note 7 far behind by almost a minute.