Journalists technical resource AnandTech conducted comprehensive testing of the iPhone 7 and iPhone 7 Plus equipped with a 64-bit processor Apple’s A10 Fusion. A series of tests confirmed the advantage of the new smartphones over the competition on the part of the computational and graphical power. 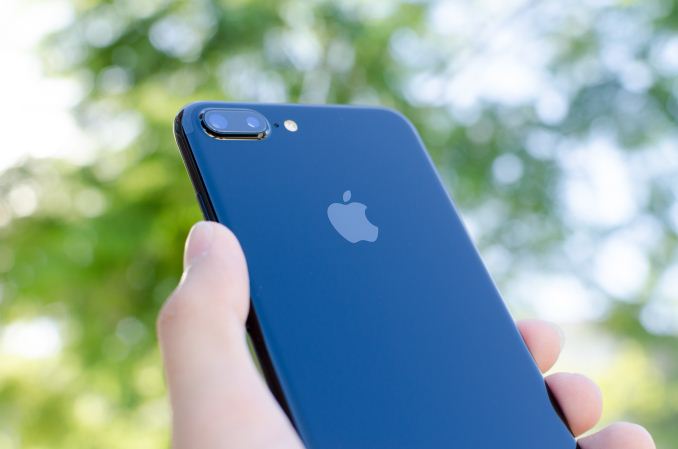 System-on-chip Apple Fusion A10 4-core processor has become a key innovation of the iPhone 7. Since the iPhone was first used by a SoC developed by Apple (A4), the company does not consider it necessary to equip their hardware with more than two cores ARM. The goal of the creators SoC A-series was and remains the most effective extraction of parallelism from single thread of instructions.

Apple’s new chip generation includes two dual-core cluster and a hardware controller that performs the migration of tasks between the latter. The word “migration” means that the high-performance and energy-efficient clusters never work simultaneously, and at the time of disconnecting one of the clusters, it passes the data to the second cache through the shared L2. A10 high performance cluster Fusion works at higher — 27% — frequency than the CPU in the Apple A9 (2,34 vs of 1.85 GHz), but it should be 40% faster.

Part A10 Fusion also comes with six-core graphics processor. If Apple continues to license IP from Imagination Technologies, it is either overclocked variant of the PowerVR GT7600, which was used in the Apple A9 or representative of the new PowerVR series Series7XT, Imagination announced earlier this year. In any case, the GPU performance exceeds that of the Apple A9 for 50%. 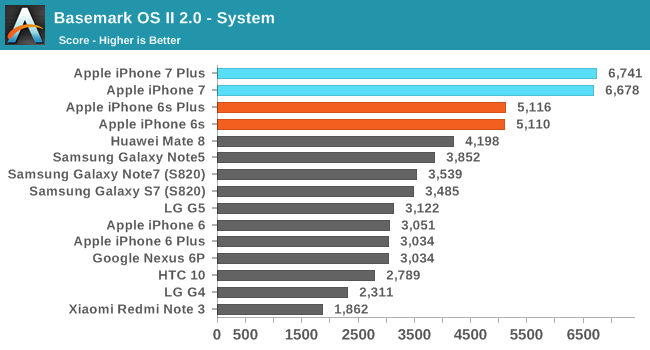 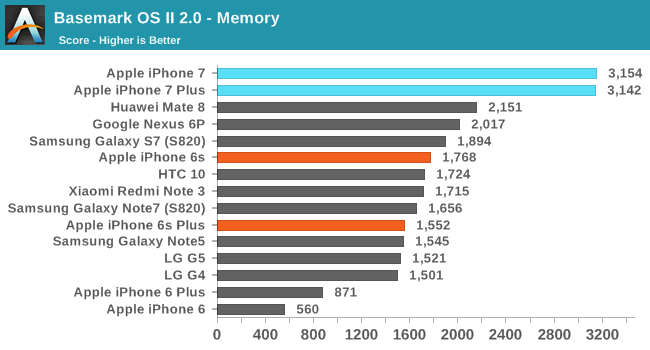 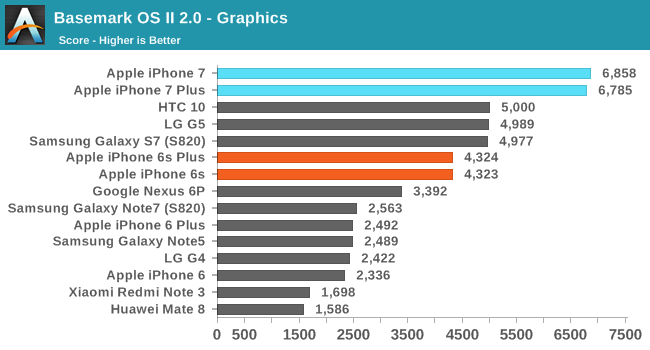 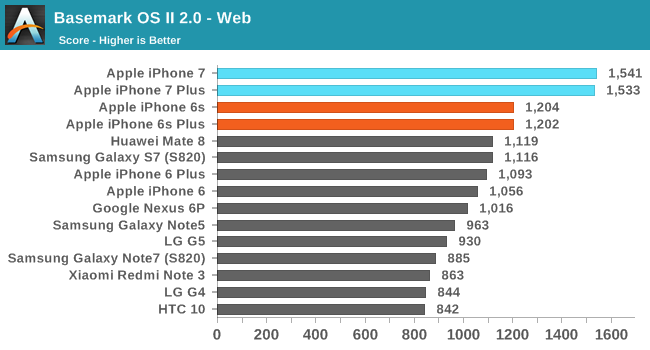 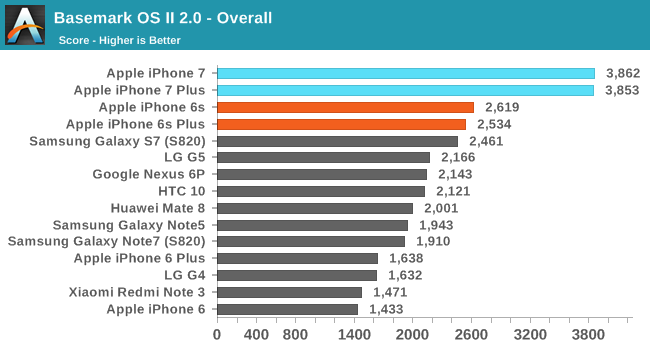 Benchmarks iPhone 7 and iPhone 7 Plus showed that smartphones are much more powerful than the top Android smartphones on the market. With the big separation from competitors, they are leading in the tests, Basemark OS II, Kraken, WebXPRT, and JetStream. In terms of performance with the new Apple smartphones can compete with the latest generation iPad. 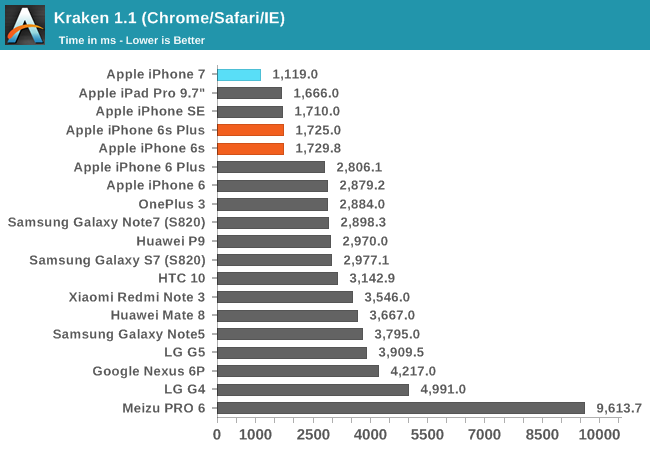 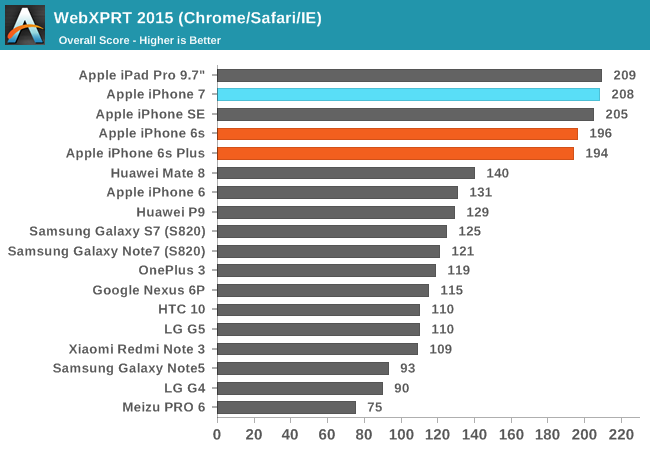 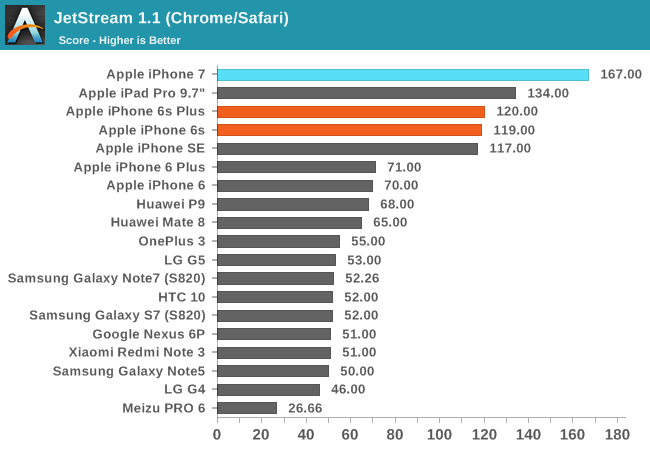 the iPhone 7 has shown impressive results in the area of Autonomous work:

“The test results from the autonomy of the iPhone 7 and iPhone 7 Plus mode web surfing via Wi-Fi was surprisingly good. iPhone 7 Plus yielded by this measure Galaxy S7 edge, but only 5% given the fact that the battery to have almost 20% less. The work time of iPhone 7 as a whole is comparable with the time of the iPhone 7 Plus and is significantly higher than the Galaxy S7 with a chip Exynos 8890. The new iPhone has significantly improved the rate of autonomy is probably due to the optimization of Fusion A10 processor and a more capacious battery”.

In benchmarks the graphics performance of the iPhone 7 and iPhone 7 Plus was the best in ranking AnandTech.

“We believe that the iPhone 7 and 7 Plus are worth the money. If you are upgrading from the iPhone 6s, you will find a large number of improvements, although it is also a big step forward, in terms of display, camera, sound quality, battery life and performance. Here are all of the same bugs and minor performance issues that will probably be fixed in the coming weeks. The new iPhone may not be as admirable as the first model in its time, but a significant attention to detail and unparalleled performance hardware allow us to speak about the superiority of the device over any other smartphone in the industry”, – concluded the experts.