iPhone 7 vs iPhone 2G: what has changed in 9 years?

The first iPhone in 2007 revolutionized the market. What is an iPhone 7, presented in September of this year? “Seven” also made a small revolution: Apple stripped the device 3.5 mm headphone Jack. We offer you to look at what else has changed in nine years. 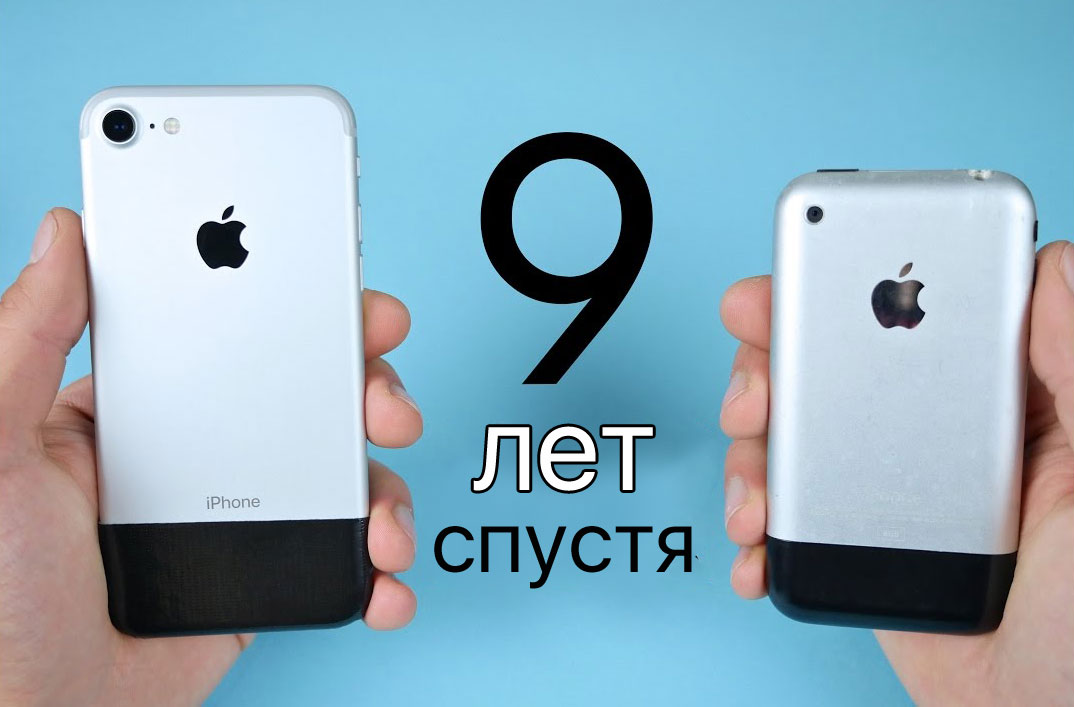 It took several years until Apple decided to increase the size of their devices. The iPhone 7 screen with a diagonal of 4.7 inches, while the first iPhone 3.5-inch. Changed the display resolution of the iPhone 2G — 960 x 640 pixels, the iPhone 7 — 1334 x 750 pixels. On the screen of the newest smartphone will fit six desktops of his “ancestor,” and he recognizes the pressing force of the finger on the screen. 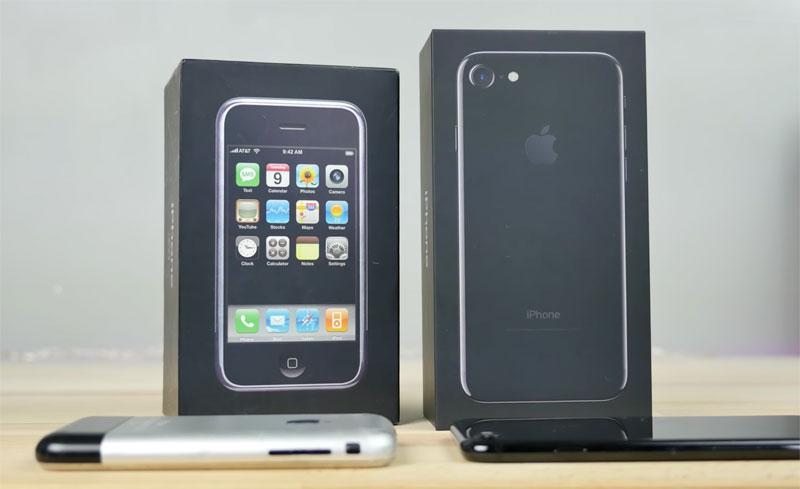 The design of the iPhone changes periodically, but remains elegant. No wonder other smartphone manufacturers copy it. It alters the set of functions: first of all there was a Lightning connector, and the only button has ceased to be physical. Instead a stationary component, creating an illusion of real physical buttons. 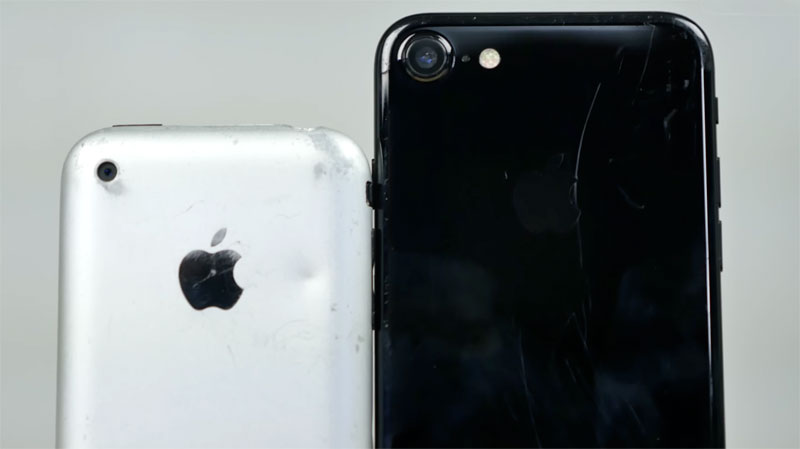 This year “Apple”, the company diversified color options of the smartphone, and added two black colors, for a total of five available options vs the only black the first iPhone. In addition, nine years ago, no one could not think that unlock your device, you can use the fingerprint scanner.

On iPhone 2G to work with multiple applications was almost unheard of: in just two applications could run in the background. The latest version of iOS 10 is allowed to remove most of the standard applications and they will now be updated separately. 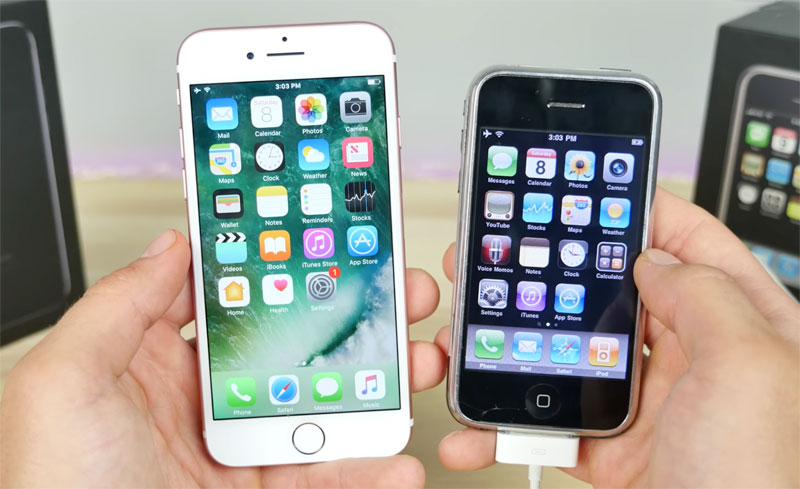 The iPhone 2G has a 32-bit processor Samsung with clock frequency of 412 MHz. For comparison: this year’s model has a 64-bit Quad-core A10 processor with a clock frequency of 2.34 GHz. Besides the chipset and the graphics module is now available under the brand Apple. RAM increased from 128 MB to 2 GB. The first smartphones American Corporation had a 4.8 or 16 GB of permanent memory, in models of the current year memory 32,128, or 256 GB. 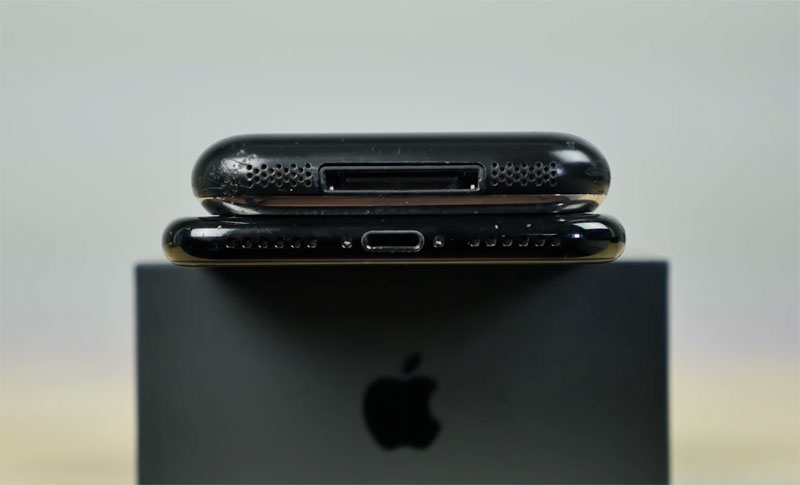 The first iPhone had a 2 megapixel camera. She didn’t have a flash, autofocus and other chips. The current model, the front camera has a resolution of 7 megapixels, accompanied by a flash and automatic image stabilization, has modes face detection and HDR. Even more impressive, the main 12-megapixel camera with six-element lens system, flash with 4 LEDs, autofocus and video recording in 4K. 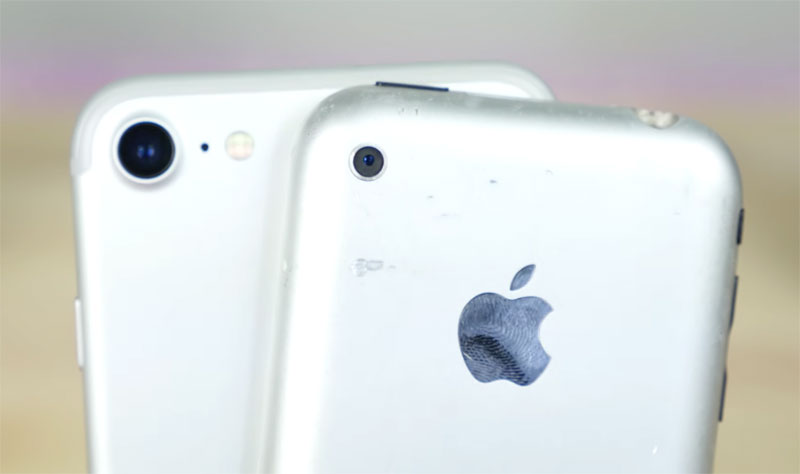 As already mentioned, changes have occurred in the audio: gone the headphone Jack of the stereo speakers. Moreover, the iPhone 7 is protected against dust and moisture according to IP67 standard.

The difference of eight years between the two models showed some amazing results have been achieved by Apple. The efforts of cupertinos bear fruit: the army of fans of “Apple” brand is growing every year, as well as profit, and hence the success of the company.