California startup Iron Ox presented a fully automated system for growing plants. 800 sq m of land instead of dozens of people work two robots. The first was “Angus” is engaged in the transportation of containers with seedlings on the farm, its weight is about 450 lbs. With the help of special sensors, it constantly monitors the growing shoots in order to provide them with the necessary care. Second, the robotic arm responsible for planting seeds, transplanting adult plants and the harvest. 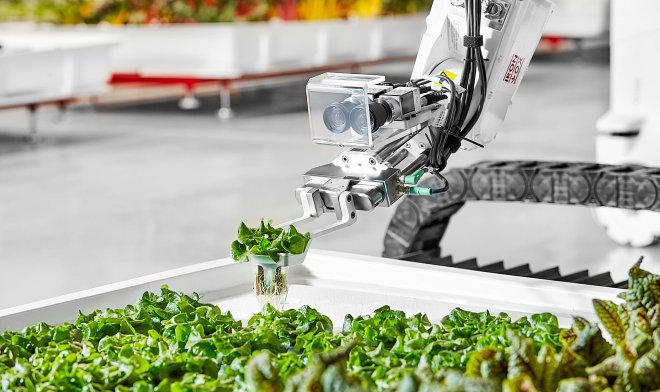 According to one of the co-founders, Alexander Brandon, the hardest thing is to achieve a variable power scope for planting. For the implementation of the project had to create a collective artificial intelligence that allows robots to perform their own individual tasks, but controls the time and place of the beginning of the robots.

Adequate nutrition to the plants ensures a hydroponic system — outdoor irrigation, and all necessary substances and oxygen are passed directly through the root system. This model allows quickly and efficiently to the product without using harmful for the human body drugs. Now Angus is only concerned with grown leafy greens, but in the near future it is planned to add with the project and other crops, for example tomatoes.

According to Brandon, the creation of such farms led his own grandfather, failed in traditional agriculture due to problems related to the environment, range of markets and labour shortages. The main advantage of Iron Ox in front of the “human” farms is the lack of such problems, and the ability to feed a huge population without spending much. Plus, these farms are very compact and can be placed in any city or settlement.

The prospects for such companies is obvious, especially against the background of traditional agriculture. Farm Iron Ox requires much less water, more economical and much more productive uses of open space. Only in the last few months the company has grown 30 times more plants than conventional farm. However, in the early stages of such projects require huge investments. This year, the project invested 10 billion dollars that on 29% more than in the previous.

Despite the high cost and the attractiveness of the technology, the owner does not seek to sell it. Alexander Brandon has declared to journalists that if they will sell robots, only by the piece for large hotels, restaurants or supermarkets, which would be profitable to produce for their buyers of fresh produce. Now the farm is grown about 26 000 units of green. According to the chief co-founder, the startup will begin selling its products to major networks before the end of 2018.