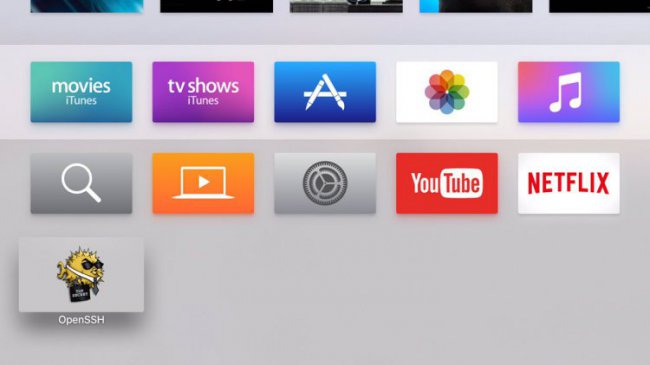 Fans dig in the bowels of operating systems in my time and have not received a jailbreak for third generation Apple TV, but this time the situation may still be broken. And indeed, thanks to the remarkably enhanced the functionality of the new set-top box to the opponents of the “walled garden” will be where carousing.

Famous jailbreaker Stefan Esser, better known under the nickname i0n1c, has published a photo (see above), which depicted the main screen of the new Apple TV, where you can see the application icon OpenSSH. Since this program can only be run on jailbroken Apple devices through the service applications Cydia, it can mean only one thing: Stefan managed to tame the source code and of this gadget.

Of course, this does not guarantee that the jailbreak for Apple TV 4 will come out soon. First, the installation of unauthorized applications is only the first step towards a fully functional and “unbound” utility. Secondly, despite the fact that the Esser consistently manage to find vulnerabilities in the new firmware, the last time he prefers not to release a public jailbreak to a wide audience.

Meanwhile, another prominent member of the community of jailbreakers, Kevin Bradley nitoTV under the moniker, recently wrote on Twitter that he absolutely believes in the imminent arrival of a jailbreak for the new Apple TV, and it is only a matter of time. We, in turn, assured that if this utility will not work from the pen of the above-mentioned figures, sooner or later a similar utility will distribute friends from China, who in recent years has greatly excelled in the field of jailbreak. A much more important question is, will users at this time, we perform this procedure with your favorite set top box.

According to the materials Gottabemobile.com