Apple equipment is appreciated, as is well known, not only for the quality of the hardware, but primarily for the experience that is often overlooked by the competitors in the pursuit of technical indicators. The main source of experience for Mac owners is the operating system. On Tuesday, the release of new versions of OS X, which now bears the name of Sierra macOS. The update is already available for download in the Mac App store. The main feature of the new software platform, Apple has become the voice assistant Siri that came with Apple mobile devices. Unfortunately, the run feature on your computer or laptop voice will not work — you have to press the icon in the dock or a special key combination. In addition, the assistant works not so perfect as I would like, from time to time have to repeat their requests.

However, Siri on MacBook can be surprisingly useful. In particular, you can ask to find files of a certain type received from a specific contact that have been modified in a certain period of time. Excellent work requests to turn on or off Bluetooth, make the screen brighter or darker. Also Siri copes with the requests to clarify your schedule, create a reminder or note. The window with search results can be dragged as a widget on the Today screen, in the sidebar it will remain there. 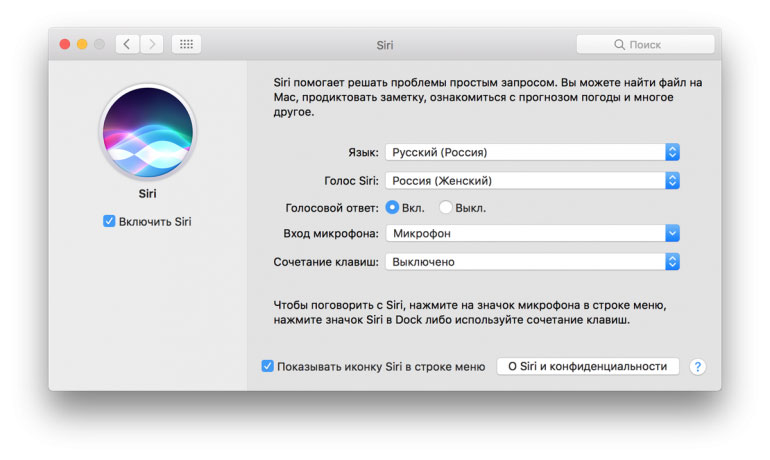 You can drag files directly from Windows Siri in any application. For example, you ask her to find images of waterfalls, and then drag one of the images directly into the presentation in Keynote. And dragged not a little square icon, and a full-sized image. The history of your requests to Siri can be monitored in the window in the same session – it is close, and she disappears without a trace — just like on the iPhone. 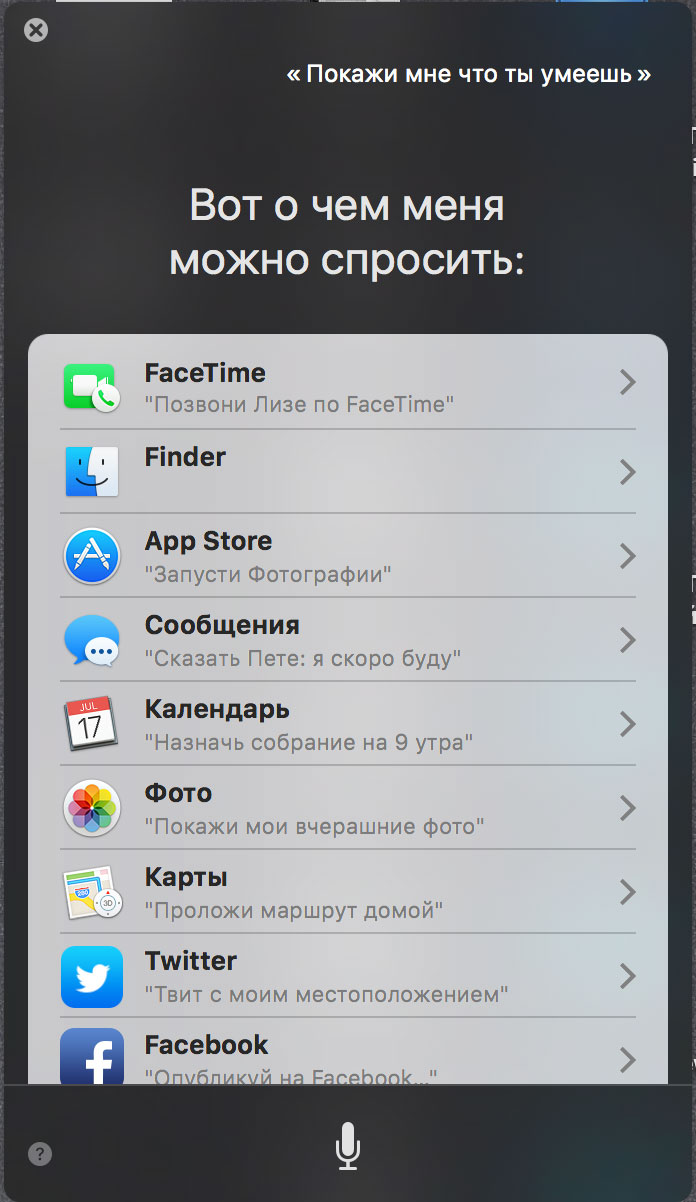 Photo app in macOS Sierra has got all new features that its mobile version in iOS 10. There are “Memories” and “Smart search” and “Geo” and “face Detection”. Many of these features have been introduced much earlier, but the interface is now more uniform, and the creation of “Memories” in the style of automatic videos Google Photos — absolutely new. 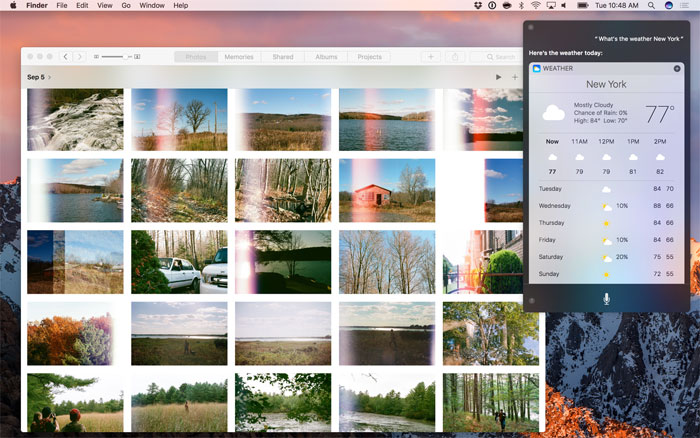 The Card interface information cards now resembles the interface of such in iOS 10. The informative value of such cards is higher than in the previous version, but the button to call Uber could not be found, as well as General references to taxi through the Cards. Perhaps it just yet.

An important innovation macOS Sierra is a completely new file system, Apple File System, which is the basis of the operating system. In APFS supports almost all features of HFS+ (Mac OS Extended), but it more meets the requirements of “Apple” products.

APFS optimized for flash and SSD drives, supports strong encryption, copy-on-write metadata, clone files and directories, as well as “snapshots” of the system, atomic primitives, and many other functions that will allow the gadgets to work faster. MacOS Sierra new file system available as a preview. To fully implement the APFS in their products, and Apple will start in 2017. 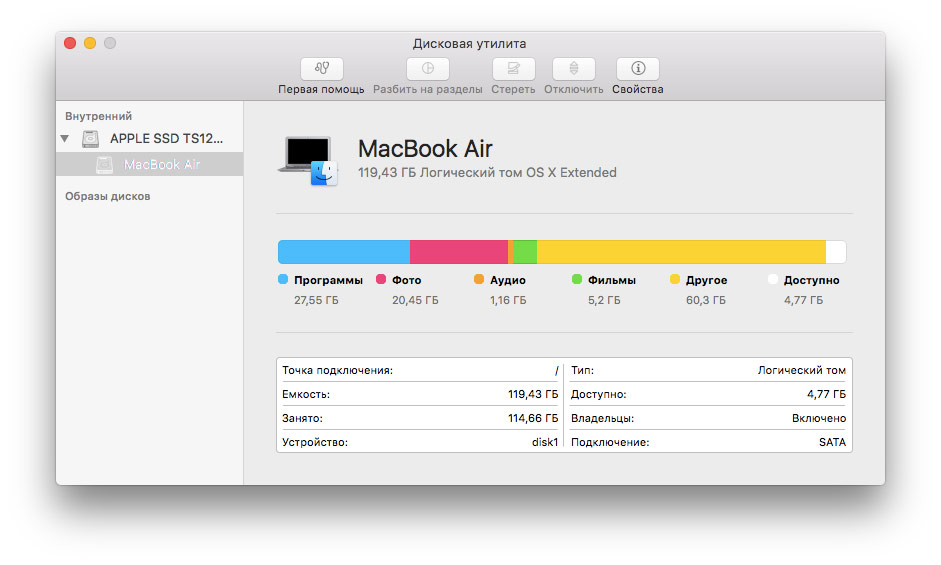 Also in macOS Sierra the company has returned to the possibility of creating and managing RAID using “Disk utility” to speed up system, forming a “band” array (RAID 0), mirrored volume (RAID 0) or by organizing the disk space according to the method of JBOD.

From the section on “Protection and security” in the settings is missing the point to allow install on Mac program from any source. In macOS, Sierra only two options — to “Mac App Store” and “Mac App Store and identified developers”. To put any software downloaded from the Internet, you need to click on the button “Open anyway” in the settings. Another way is to hold down the Control key, clicking on the app and choose “Open”.

macOS Sierra supports “storage Optimization that automatically moves into the cloud all the unnecessary files and loads them upon request. If you navigate to About this Mac — Storage”, he immediately noticed the new button “Manage…” which is a lot. Here and more fine-tuning of the distribution of files between local disk and cloud storage, and automatic cleaning of the basket, and Uninstaller application and browse local contents to iTunes and smart limit on downloading mail attachments, and more.

Now the MacBook does not prompt for a password if you open it with your Apple Watch on your wrist. In order to unlock your computer, simply open the lid of the laptop. On the clock screen shows the notification on the cancellation, which in some cases will allow you to prevent unauthorized access.

The clipboard called Universal Clipboard, now lives in the cloud — you can search pictures or links on your iPhone or iPad, copy them, and then sit down at the computer and pasted into documents from the cloud buffer.