As you know, users of Windows 7 and Windows 8.1 can upgrade to Windows 10 for free until July 29. Some time ago, Microsoft began insistently recommend to upgrade to the new OS. The center of the system updates was to automatically set the time Windows 10 installation, and simply closing the pop-up window with information about the installation meant not failure, but the user has consented to this operation. Now users do not have to close the window to update.

If before pressing the x in the upper right corner of the window is counted as the user’s consent to install Windows 10, now Microsoft has removed even the illusion of failure from the update. If the screen displays a dialog box to update, the user leaves only two options: to install the update now or schedule a date. Moreover, time for transition to “ten” can be specified only once, and then modify it or to postpone the installation of Windows 10 will not happen.

Many people, victims of their negligence and agreed to the installation of Windows 10, reported that running the upgrade process is pretty hard to stop. According to one of the victims, he did not succeed, but subsequent attempts to roll back the system to Windows 7 led to the emergence of a “blue screen of death”. 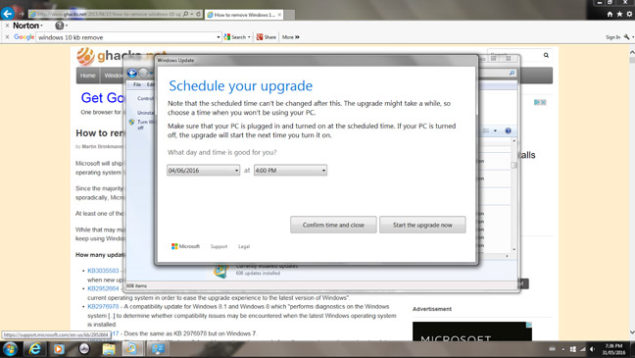 To date, Windows 10 is installed on over 300 million devices, including PCs, tablets, smartphones and Xbox One. While Microsoft hopes that in two years the number of devices running Windows 10 will amount to one billion.