Apple has a complicated relationship with the concept of computers “two in one”. The company tries not to name the iPad — even the most expensive 12.9-inch iPad Pro with keyboard and pen — hybrids like its competitors such as Microsoft with a series of Surface or Lenovo Yoga Tab. However, in Cupertino want the consumers perceived the iPad is not as “iPod on steroids”, but as something closer to computers. 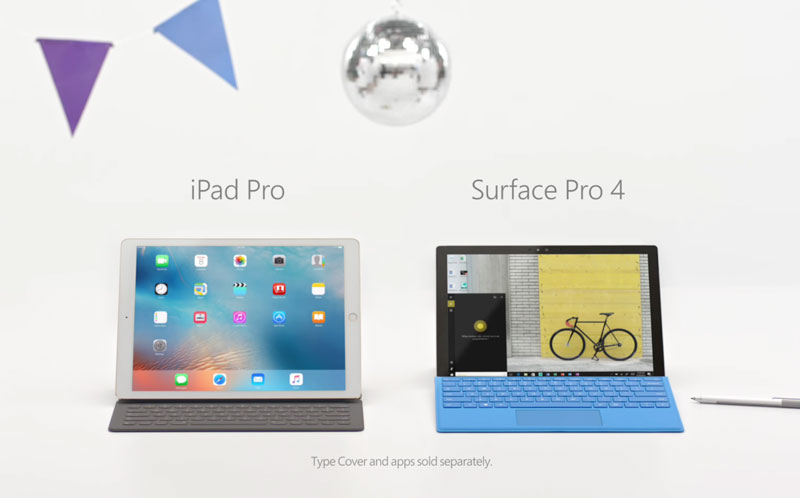 Earlier this month Apple released promotional video of iPad Pro, which made this argument as transparent as possible. Instead of promoting the iPad Pro as a device that can execute software desktop-class, Apple puts emphasis on the fact that today the main feature of computer — flexibility. In the case of iPad Pro, you can print on the keyboard, but also to abandon it in favor of mobile and touch, you can draw or perform handwriting input using the Apple Pencil.

Microsoft in its new ad for the Surface Pro 4 tried to ridicule this approach by Apple.

“Just because you call something a computer does not mean that the term is appropriate here. But Cortana knows what the Surface Pro 4 with a powerful Intel Core processor, a detachable keyboard with real keys and a trackpad, stylus, touch screen, full office and external ports to just fit that description. Everyone else is just late to the party,” – said in a promotional video Microsoft.

Given the fact that iPad Pro running iOS instead of using the platform, closer to macOS, all that remains for Apple is to focus on a wide range of possibilities that the user receives when purchasing such an expensive tablet, made in Microsoft.