Many of us use wireless headphones, and these devices every day progress and give more quality sound. Apple, which seeks to be a pioneer in everything, is to fully deliver us from the cords — even from her signature stylish white. 7 in the iPhone headphone Jack is not provided. For those who use headphones, bundled, provided same Jack that is used for charging. Other models offer an adapter, but in the future, I guess we really are moving away from wired systems. 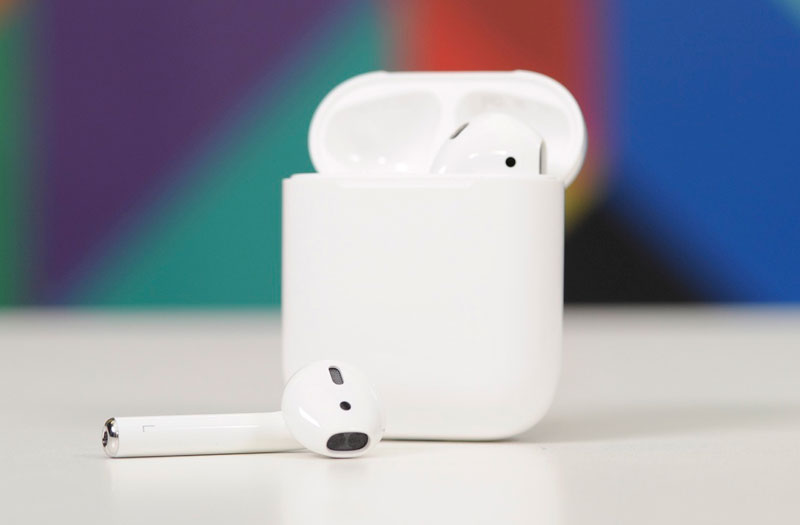 New wireless earphone Apple AirPods are different in that the left and right headphones are connected sound source separately, the earphones themselves do not participate in the section of the sound channels. This is one of their amazing qualities that make them special — but in September, when it was first outlined the concept of the device, in the global dominance of AirPods believe with difficulty.

After the presentation of the Apple product took on a two-month pause to headphone has been completely revised and brought before the lovers of technical innovations product, is almost devoid of flaws and shortcomings.

For many technical observers of bullying every new step Apple became a kind of sport. Most of the claims to the AirPods on the level of design was to ensure that they look weird and they look like q-tips. To understand such attacks is quite difficult, because AirPods visually almost identical to the standard Apple headphones, but without the wires. They are slightly down relative to the ear, and not in vain — they mounted microphone, which you can use to respond to calls (and the quality is decent, thanks to the noise reduction system you will hear even those everyday sounds in the apartment of the subscriber whom you’ve never heard before). Wear them in the big city is much nicer than headphones or a Bluetooth headset. 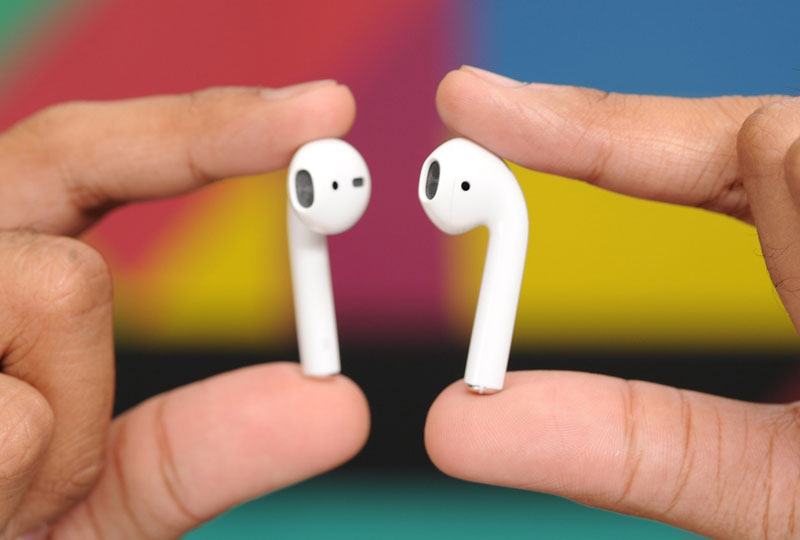 In order to put music on pause, enough to remove one of the headphones, and immediately upon his return back to the ear stream will automatically continue. Of ear headphones do not fall out — as has been explained in Apple, the main weight of the headset carry the wire, and so the white AirPods with the ease and comfort are kept where they should be. And that the headphones flew out of his ears, it turns out, was also guilty of wires — however, in order to assess their convenience, need to try out the device yourself.

Spectacular design adds a white case with typical Apple smooth corners and the size of a box of dental floss. This case is also a charger. Headphones themselves work 5-6 hours, using the battery in the charger the validity period can be stretched to a day — almost five times. 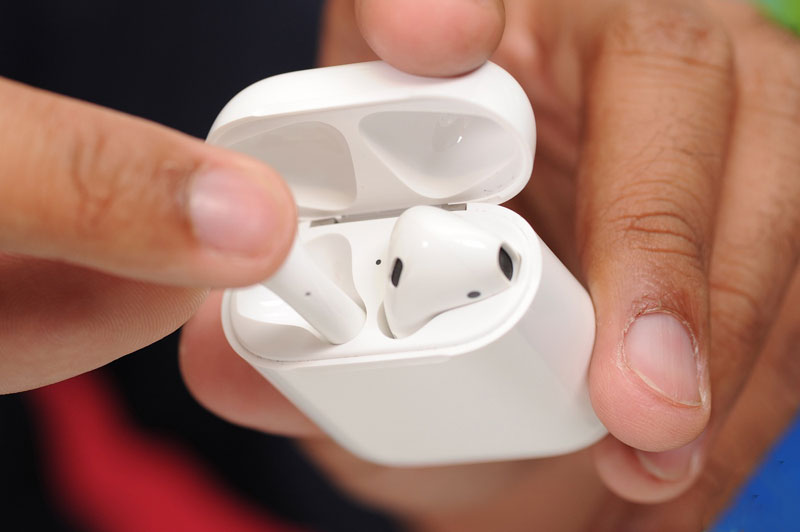 If you ever set up Bluetooth device, you are surely aware that in the process you can head to a break. AirPods are one of the fastest connected devices — all you need is to have enabled iPhone or iPad with iOS 10 and above. AirPods are connected to the smartphone simply by opening the case: it is enough to bring it closer to the gadget and the screen will display the connection menu. After that, there is no need to go into settings, you can safely turn on the music. Headphones can simultaneously connect to the iPhone and Apple Watch. 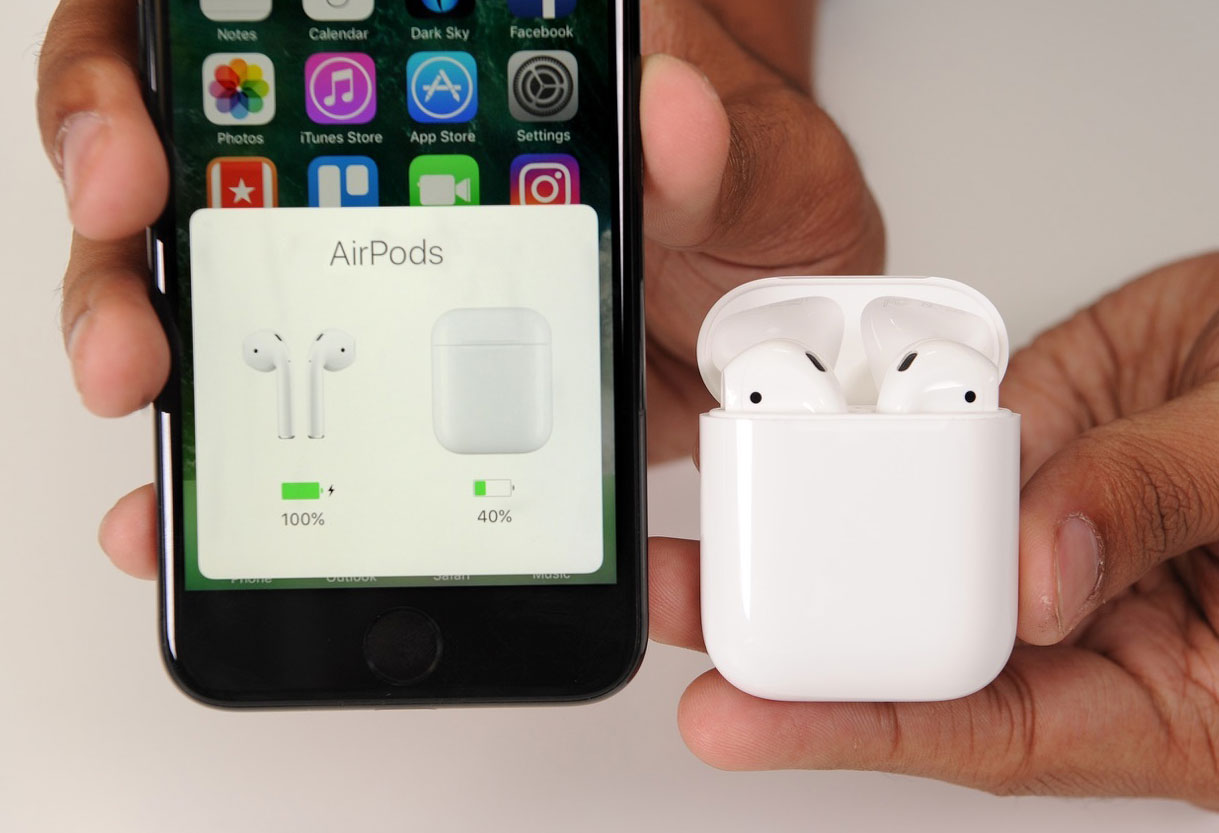 To a small “ear” AirPods sound just fine — impressive bass for fans of rock and heavy electronics and is absolutely clean sound for lovers of tracks with lots of “air” old school hip-hop, funk and ambient. 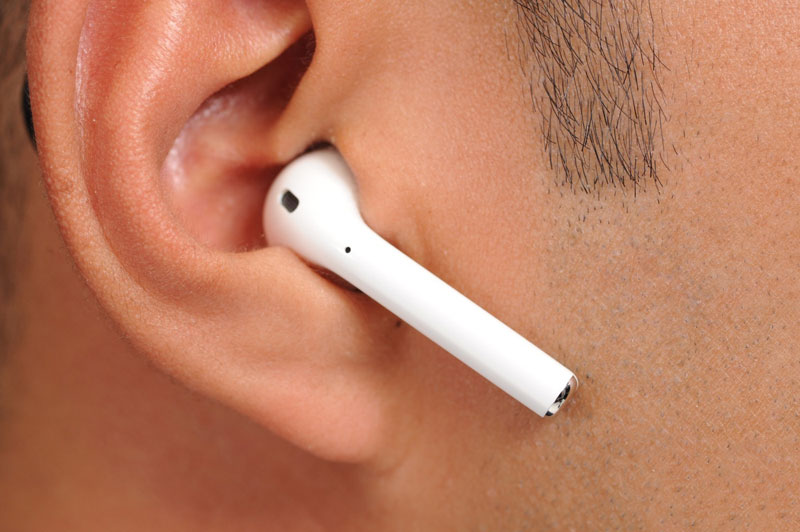 However, it is possible basically only in the room — noise reduction in the headphones did not rule out hearing the sharp horns and really loud noises. For this reason, AirPods can comfortably ride a bike or motorcycle. In the subway, too no feeling full off of reality, so there are no concerns about the fact that you miss the right stop.

Headphones are for people, not for audiophile fanatics who want crystal clear sound every time.

AirPods is not just headphones. As the device that is connected to iPhone, iPad, and Apple Watch, they also help you to work with Siri. In order to connect the command post of the Apple devices need to touch the headphones, and then you will hear a familiar voice that will help you to see the weather, send SMS, find the nearest McDonald’s and so on. 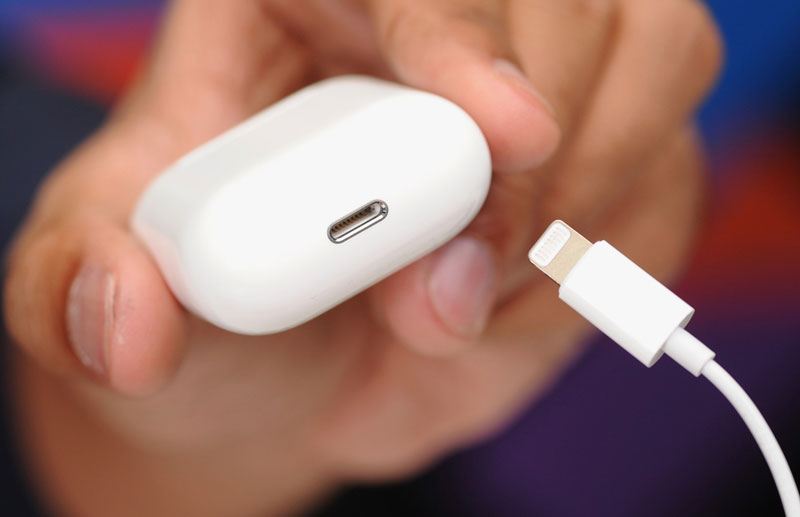 This very quickly get used to it, even if at first it seems strange to talk “with air”. In General, as the Apple Watch is not really about time, but about control your phone from the watch, and the AirPods is not only music, but about the interaction with the iPhone, Apple’s ecosystem.

Unfortunately, there are some downsides — Siri is enabled only after touching certain points of the headphones and allow sound only with its help. In order to increase or decrease the sound tactilely, will have to get the phone. 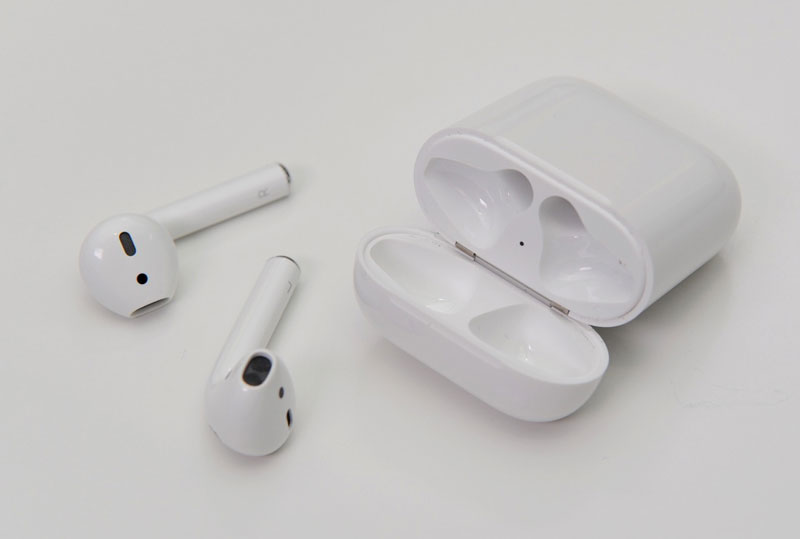 If they get lost

Suggest to always carry in your pocket case for AirPods and not be lazy every time, removing them from the ears, remove the hard case. So reduced risk of losing or dropping the device. But if the losses still failed to avoid, replace in the service center, one of the items the headset or the case, will be slightly more than a third of the cost AirPods. The loss of two “ears”, therefore, it is almost equivalent to buying a new set. 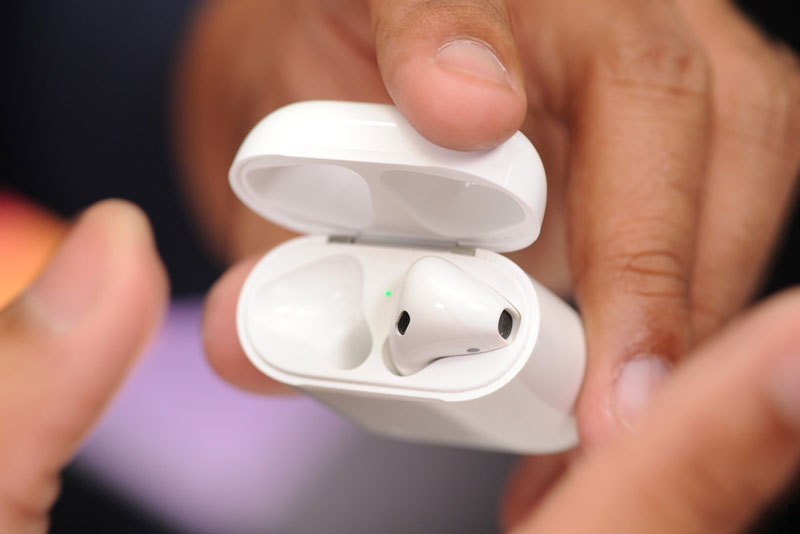 Is it worth taking?

The fact that you can now answer phone calls without removing hands from the steering wheel of the bike completely removes the question of whether the device iPhone users. Besides AirPods significantly cheaper than many wireless devices for the money you can afford to participate in a sound experiment. Besides those headphones that can be worn, when you come into the office, they will automatically connect to any device connected to iCloud, so you don’t have to switch to new music. 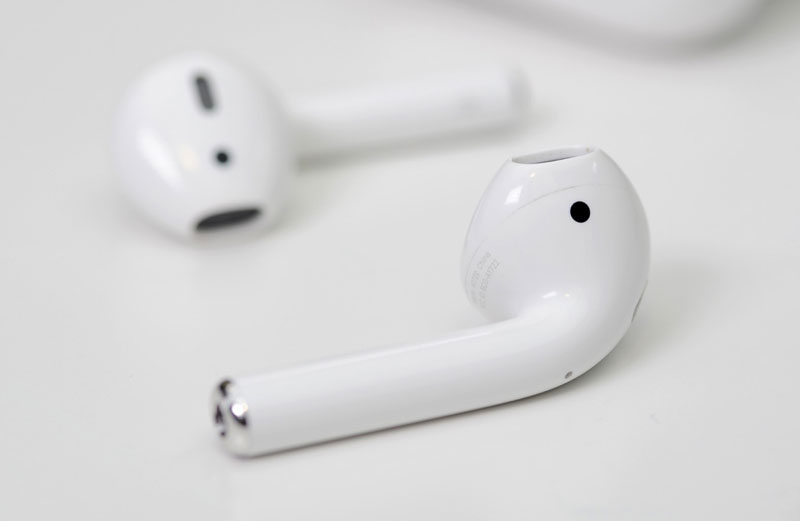 AirPods is one of those rare occasions when in Russia sales of the device began simultaneously with the United States. However there is a caveat – buy headphones at the moment, only at the Apple online store. They cost 12 990 rubles. But if you make order today, it will bring AirPods only in February and those who have already placed an order in advance will receive headphones for a couple of days before the New year.

In offline stores AirPods yet, and it is unlikely they will appear there soon, as online-orders around the world are breaking records in the number of applications, what other selling point does not have gadgets. I think that is called a successful product launch. 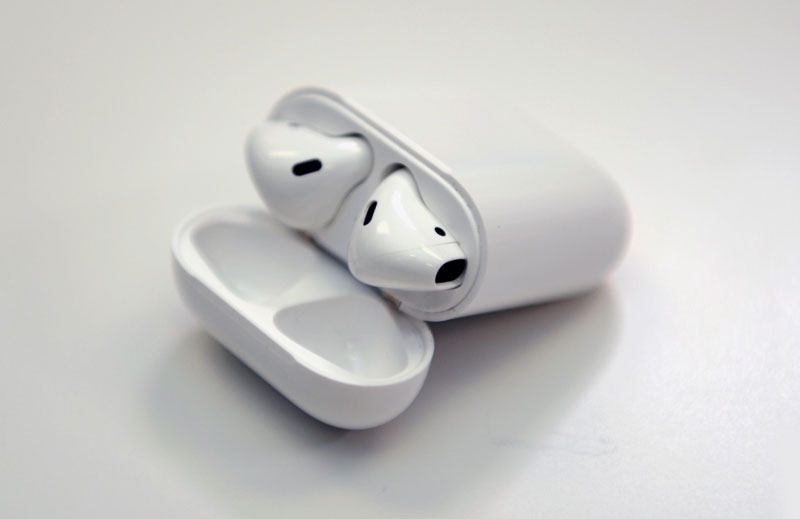