“Mail of Russia” will purchase 15,000 INOI smartphones on Sailfish operating system for mobile post-POS (BMD). The first batch of smartphones will be delivered within 12 weeks from the date of signing the contract in the amount of 6 pieces 730, the remaining part in the amount of 8 270 units in February 2018. 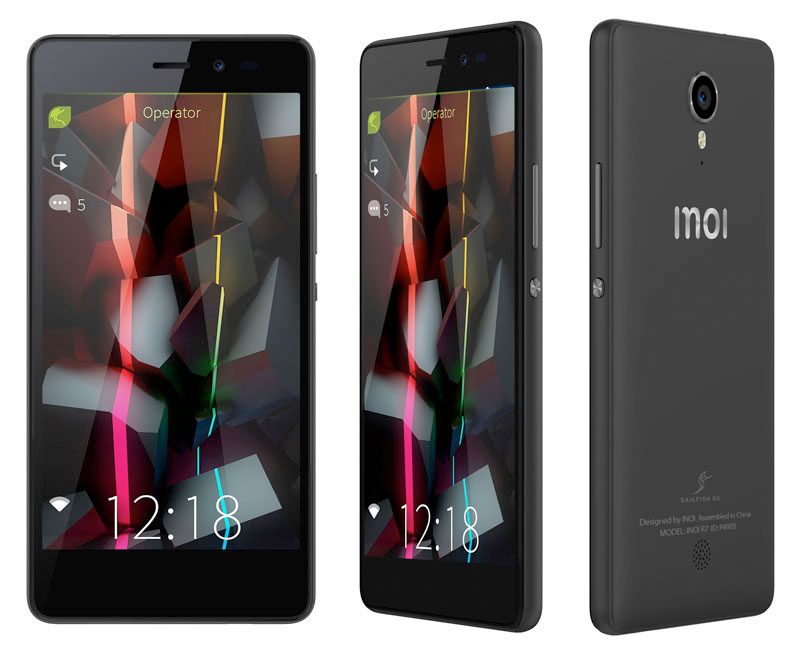 “Mail of Russia” planned to spend for the device not more than 195 million roubles In the result of the auction, the company saved 12% relative to the initial maximum purchase price, according to Vestifinance. Thus, the “Mail of Russia” has spent about 171 million rubles.

Mobile email-POS “Mail of Russia” – a smartphone with preinstalled applications that are used by postmen and couriers to receive payment of utility and other services from the public directly at the place of residence. The project started in 2014 currently, BMD is equipped with 10 000 postmen in 38 branches of “Mail of Russia”.

Monthly current BMD is taken by about 1.5 million of payments from the population. “Mail of Russia” announced a similar purchase last summer. Then, the company has purchased 8 000 smartphones on the Android operating system, was considered the Samsung, Philips, ASUS and Huawei.

Reportedly, the smartphones run on the Russian operating system Sailfish OS. However, the OS is not fully Russian development. Sailfish OS is owned by Finnish startup Jolla. In 2016 to Jolla joined the Russian company “Open mobile platform”.

The project is based on operating system MeeGo, which was used in Nokia smartphones and in 2012, the vendor decided to give up. The platform seemed promising, so its developers have separated from the Finnish company, called themselves the Jolla and continued to develop the operating system, which was renamed the Sailfish.

By may 2012, Jolla have joined many professionals involved in developing Maemo and MeeGo , including mark Dillon, the former lead developer of Linux-directions Nokia. The new company is developing a new operating system based on MeeGo using the Mer and Qt framework. Jolla tried to sell smartphones under its own brand, but lost army of cheap Android smartphones. To save the company from bankruptcy helped the course on b2b solutions and corporate sector.

In may 2015, at a meeting of representatives of the Ministry of communications and the company Jolla announced plans of Russia to create its own mobile operating system based on the original Sailfish OS — Sailfish Mobile OS RUS. The development has been created in April 2016, the company “Open mobile platform” (OMP) is a company registered in the city of Innopolis (Tatarstan) founded and established in March of 2016, the company “Open mobile platform developer center”.

“Open mobile platform” participated in the competition of “Mail of Russia” with Jolla, but defeated the other bidder – the “Center of distribution” running on the same OS Sailfish Mobile ENG device Inoi.

The Chairman of the Board of Jolla Antti Sarno said that Russia is not planning on creating a mobile OS to compete with iOS and Android-based Sailfish OS. According to a top Manager, developer contributions Sailfish in creating alternatives to popular OS in Russia lies in the “integration of the best local services.” According to him, the device includes the Jolla store, Yandex, and “more and more Russian services appears in Sailfish OS”.

5 Sep 2016 Sailfish Mobile OS RUS was included in the Register of the Russian Ministry of communications, which state agencies are required to navigate the procurement BY, and at the end of 2016 received a certificate of the FSB’s requirements for data protection, not constituting a state secret.

The first product on Sailfish Mobile OS Rus was the mobile WMD “Ermak” with the far top stuffing and a price tag from $1,500 to $2 thousand Inside the gadget the old Qualcomm Snapdragon MSM 8960 processor with a clock frequency of 1.5 GHz, 1 GB of RAM, constant memory is 8 GB. The display diagonal of 4.5 inches has a resolution of 1280 x 720 pixels camera — 8 megapixel with autofocus and flash. Ermak did not hit the open market, and the number of sold copies of tenders is unknown. Now “Ermak” appeared heir — INOI R7 smartphone, announced at MWC 2017. 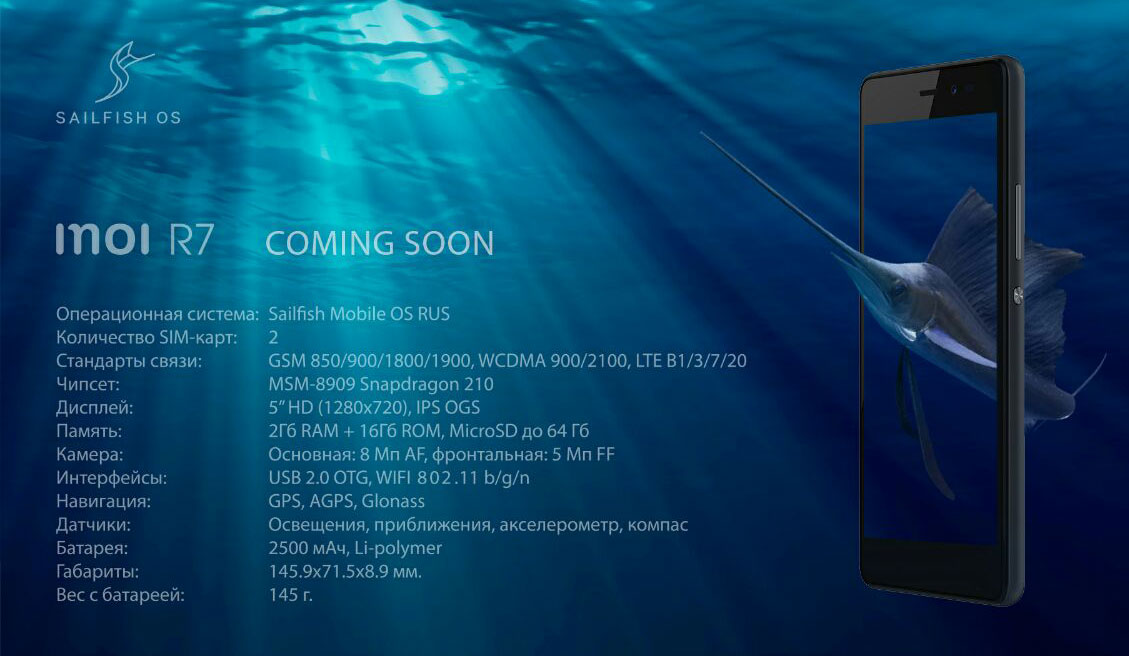 According to the Director, ISR Pavel ages, the smartphone will be designed for middle-level personnel of corporations and employees of municipal bodies. It is planned to sell 500,000 smartphones Inoi. The total demand of the Russian market of corporate smartphones in the ISR is estimated at 55 million units: 5 million for the public sector, 10 million for business users and 40 million for students, educational institutions, pensioners, etc.

The device is assembled in China, features a 5-inch display with a resolution of 1280 x 720 pixels, a single-chip system Qualcomm Snapdragon 210, 2 GB RAM and 16 GB of internal flash memory. Supports memory cards microSD up to 64 GB. The smartphone supports LTE network and has a battery capacity of 2500 mA•h Resolution of cameras is 8 and 5 MP. In addition to GPS, the smartphone also supports navigation system GLONASS.

Characteristics of the smartphone is far from the top. But in General, it is logical that to receive payment of utility and other services of high power is not required. The price of the gadget for the public sector it is difficult to call fair. Smartphones from Archos, Alcatel, Huawei, LG, HTC with similar characteristics are significantly cheaper – from 4 579 thousand.

In the summer of last year “Mail of Russia” has bought 8 thousand smartphones on the Android operating system, was considered the Samsung, Philips, ASUS and Huawei. Now in the procurement documentation “Mail of Russia” operating system not specified, but notes that it should be certified by the Federal security service (FSB). Such certificates of the Russian Sailfish is, said the General Director of the “Open mobile platform” Pavel eyges. But in the technical documentation of “Mail of Russia” has explained that will be ready to purchase either a smartphone Jolla C, or their equivalents, using the specifications.

The presence in the registry of Russian software provides benefits in public procurement of software. Since January 1 of last year, foreign purchases of restricted programs for government agencies (including regional and municipal authorities). If they want to buy foreign software, you must first check the registry and make sure that there are no analogues. But if analogue is what the buyer can buy foreign software, but only if publicly explain why it does not like the Russian equivalent.

In mid-July 2016, the first Deputy Prime Minister Igor Shuvalov has sent a Directive to state representatives in boards of Directors of state-owned companies to those purchasing software, gave preference to Russian. In particular, one of the requirements to be procured should be its presence in the registry. That is why the smartphone is assembled in China from components of foreign production and working on a modified Finnish operating system, at a cost of “Mail of Russia” in a price significantly above similar Android smartphones that had no chance of winning the tender.