Sales of smart watches are growing with Apple Watch

A recent analysis of the segment of wearable electronics from IDC showed that the smart watch for the first time as close to fitness bracelets on the number of shipments. Not the last role was played by the Apple Watch.

Analytical company IDC has shared its latest study of the market of wearable gadgets and fitness trackers. Proceeding from it, it can be concluded that sales of smart watches grew by 60.9 percent in the second quarter of 2017.

The growing popularity of smart watches have been seen on the background of falling demand for pedometers and fitness bracelets. For the last quarter decreased delivery devices, focused exclusively on sports. 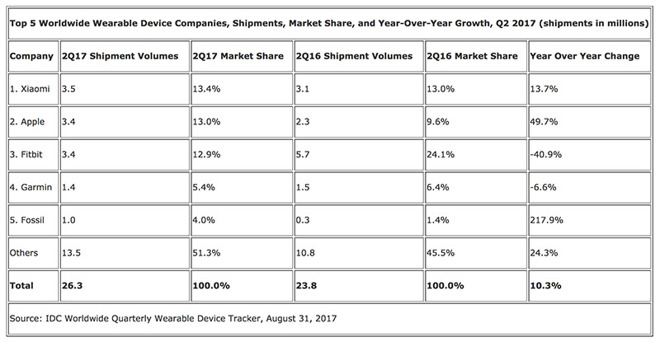 People increasingly prefer a more advanced and functional device. The reason for this was the fact that all smart watches are by default contain the functionality of the fitness accessories.

First place in the IDC list is Xiaomi, which sold 3.5 million devices and received 13.4% of the segment.

Apple showed a marked increase after the release of the Apple Watch the second series – the updated version of the hours with emphasis on sport and a healthy lifestyle. Apple watch has captured 13% of the market of wearable electronics. Deliveries totaled 3.4 million units for the quarter. This 49,7% more than last year. The largest increase among other companies.

Fitbit as a company, which popularized sports gadgets, sold about the same at 3.4 million units, but took 12.9% of the market. The gap is tiny, but it’s an unhealthy trend for Fitbit.

The representative of Fitbit says that the company is all right, and recently represented the Ionic Fitbit tracker is a unique product in the field of healthcare. This gadget needs to return the company to Fitbit leadership.

Completing the top five most popular wearable gadgets Garmin and Fossil, which received 5.4% and 4% of the market respectively.