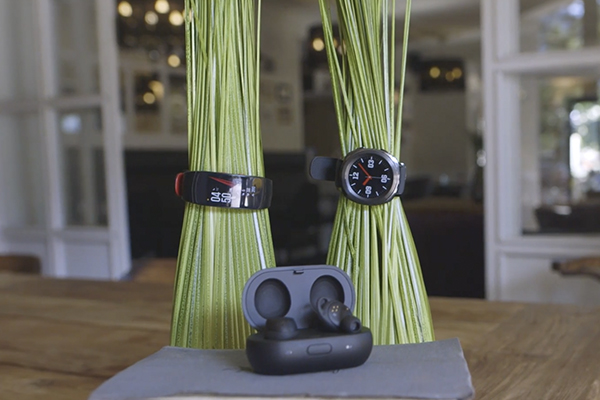 All the new devices are aimed at a sports audience that reads their names. New items compatible with both Android and iOS.

Watch got a round AMOLED display with a diagonal of 1.2″ and a resolution of 360 x 360. It is protected by glass Gorilla Glass 3. Dual-core processor, 4 GB of internal memory and 768 MB RAM. Bluetooth version 4.2, GPS, barometer, NFC availability to work a payment service, Samsung Pay. Battery capacity 300 mAh battery (the company claims four days of battery life).

Sport Gear protected from water and dust. They can dive to a depth of 50 meters. The price has not been announced, but will be less than asking for Gear watch S3 ($350).

The bracelet also has an improved moisture protection. Added tracker and continuous heart rate, which will help monitor your performance.

Headphones have not changed in design, they are identical to the version 2016. There are new colors — black, pink and grey. Icon X will be able to track steps.

The company has focused on the working time of the gadget: up to 5 hours music playback via Bluetooth, 7 hours internal memory headphones (you can upload up to thousands of songs) and 4 hours as a headset. Price to be announced. The sale is scheduled for the autumn.