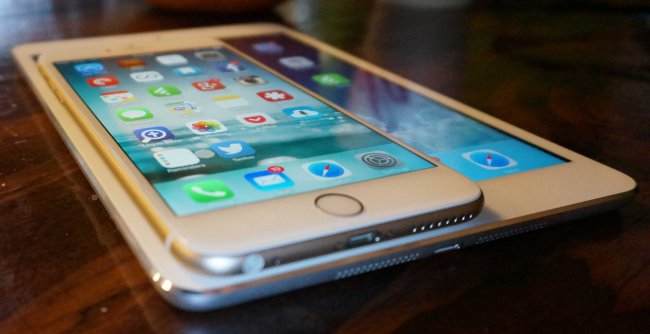 the second generation iPad mini, obzavedshimsya Retina display, was truly wonderful device, but like all flaws. The main claim to the tablet was more faded and less sharp picture, absolutely incomparable with the one that showed the 9.7-inch iPad Air. But for the past two years, Apple worked tirelessly on the most perfect display, which became the property of the new iPad mini 4, surpassing in many respects even the premium iPad Pro. It is remarkable, but the upcoming iPhone 7 have to do with anything directly related.

In 2014 Apple presented its first tablet with an anti-reflective layer, the introduction of which was asking for a very long time. However, the introduction proved to be very controversial, causing a real storm of controversy. According to some experts, a Matt layer was so dense that it was concealed by the lion’s share of contrast and saturation of the image. However, others argued that, in addition to extremely positive, other emotions “sunlight” in the iPad Air 2, they have not caused.

One way or another, but Apple has listened to the statements of experts and consumers, changing technology frosted cover mini iPad 4. Strange thing, but no iPhone was not equipped with an anti-reflective layer, which probably will get the flagship smartphone of 2016. Why? Think about it: Apple is trying to demonstrate to us the fact that “BJ” is no longer honored, but the use of advanced technologies in a relatively unpopular device, ignoring the leaders, have the top indiscretion.

According to tests specialists DisplayMates, the iPad 4 is superior in color accuracy those in all other Apple products, including iPhone 6s. Displays “6s models”, by the way, have not changed since the days of the iPhone 6, and therefore the improve by 2016 looks quite logical step. If Apple was able to introduce such a good display in the iPad mini, it is much more popular and generating more revenue iPhone just has to be at least as good.

Another factor that may push Apple to develop the highest quality display “of all times and peoples”, — Samsung. According to the results of research on phablets Note 5, held above DisplayMates, its screen was better than the “Apple” solution. Of course, the iPad mini 4 Korean offspring has a very detailed attitude, but, in short, cupertinos have no right to strike in a dirt the person and to produce something mediocre.