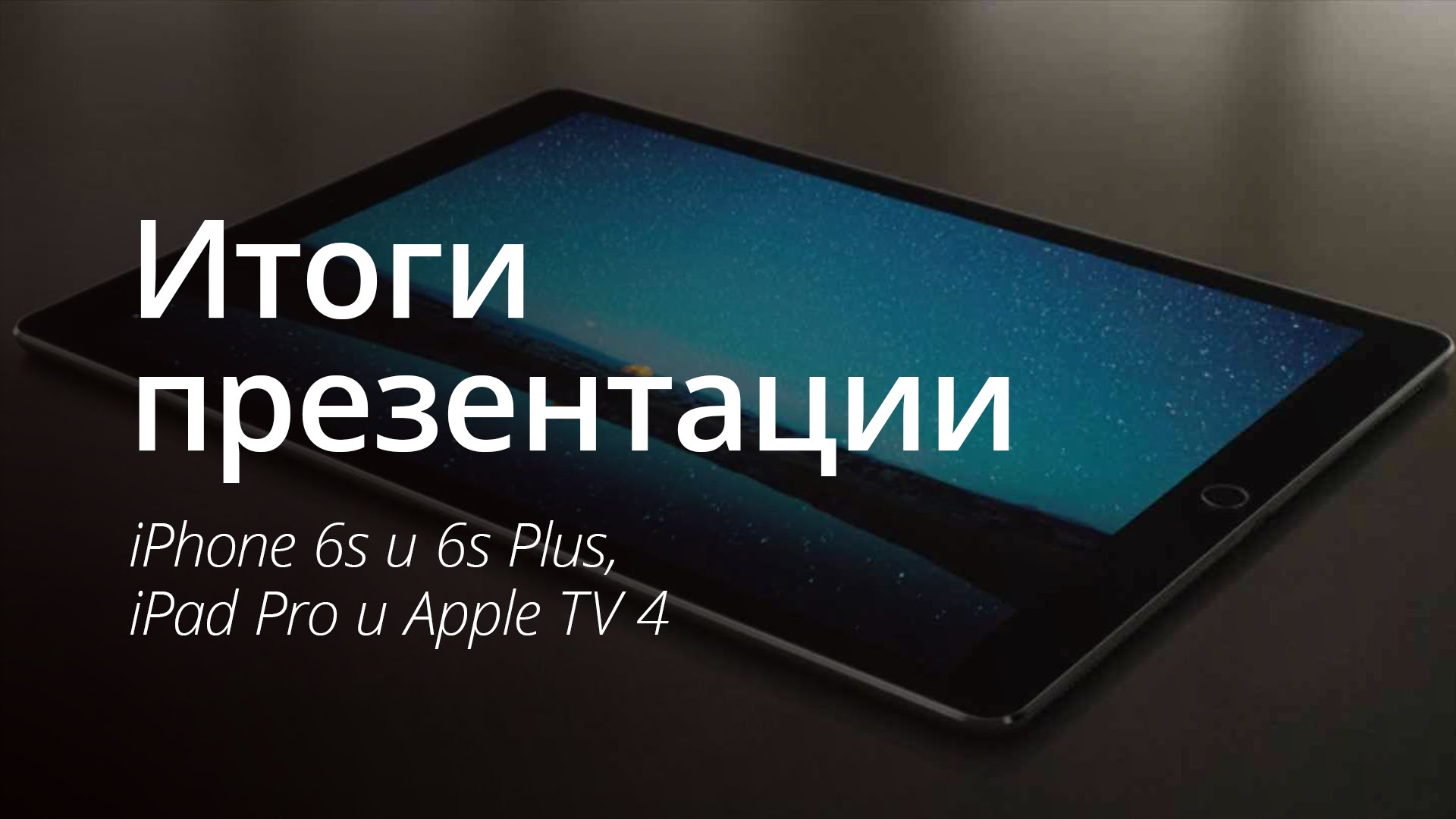 Last night Apple held perhaps the most symbolic presentation in recent years and has introduced some amazing new products: iPhone 6s, iPhone 6s Plus, iPad Pro and Apple TV new generation. We have prepared the material in which laid everything on the shelves and summed up the event. If you are too lazy to watch the whole two-hour presentation, and even in English, we offer you to get comfortable and enjoy the view! 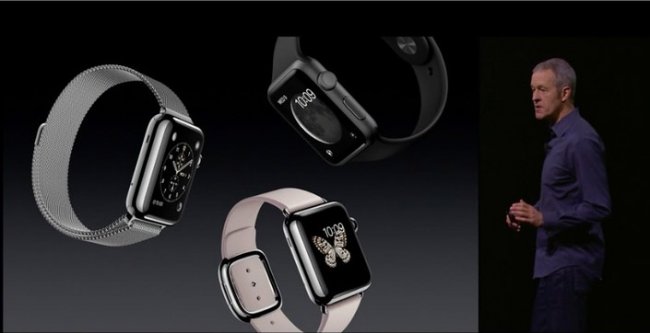 Apple began its presentation with a conversation about smart watches Apple Watch. A key innovation support watchOS 2 third-party applications such as Facebook Messenger, translator, iTranslate, and a unique medical software Airstrip. And appearance: the watch has got different colors including pink, blue and beige, and have new straps made of genuine leather. Update watchOS 2 will be available on September 16. 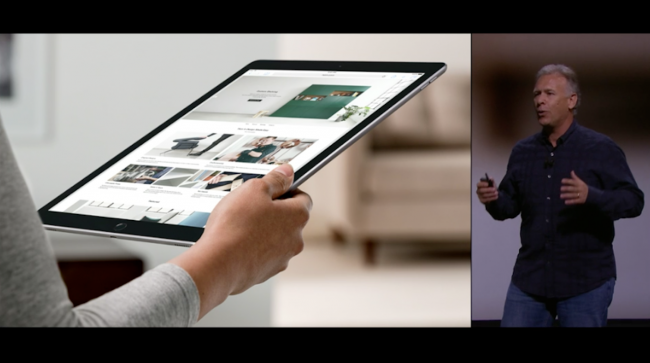 In addition, the tablet surprises with its performance, which is the responsibility of the new A9X chip, its third generation of 64-bit chips. Phil Schiller said that this tablet will deliver the performance level of desktop PC games at console level, and if this iPad Pro will run 10 hours, like other members of this family.

The tablet has four speakers, Hi-Fi, 8MP camera, Touch ID, LTE, and support for the new accessory Smart Keyboard that is very reminiscent of the cover from Microsoft Surface, and the most unusual — Apple stylus Pencil. The stylus is equipped with a Lightning connector, and him from time to time will require recharging. You can use including iPad Pro. As for the use of the stylus will be adapted as an app for Apple and third-party software, such as Microsoft and Adobe.

The thickness of the iPad Pro is only 6.9 mm with a weight of 713 grams. The model with 32 gigabytes of memory without LTE will cost 799 dollars, and the most advanced version costs $ 1079. Apple Pencil will have to pay 99 dollars, and the Smart Keyboard will cost $ 169. iPad Pro will be available in November. 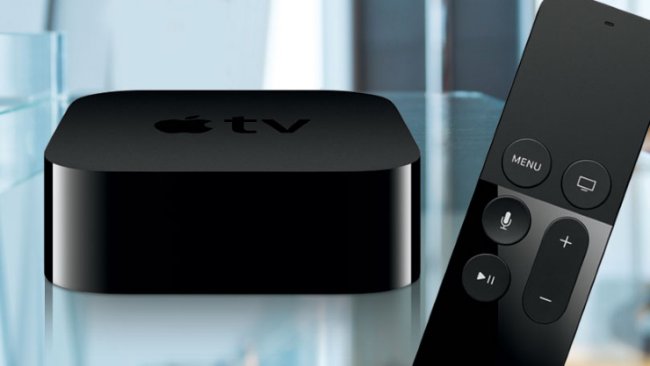 And then Apple unveiled its new Apple TV 4th generation running on the operating system tvOS. Henceforth the TV set-top box has its own store of apps and games, as well as support for voice assistant Siri and Apple Music. Changed the remote. It was voluminous, it appeared to the touch panel and slight change of the control button. In addition, it is now possible to play games use the remote like a Nintendo Wii controller.

As for Siri, thanks it Apple TV seriously expand. From now on you can ask her to show us fresh editions of your favorite TV shows, the cast viewed the film, the result of the game of your favorite teams, weather, and much more.

Prices for the device start at $ 149 for the version with 32 gigabytes, the older model has memory of 64 GB and the price tag is equal to $ 199. The console will be available in late October. 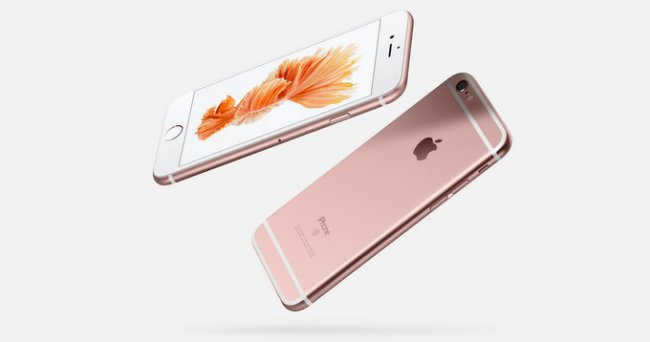 And finally Apple showed the world the new iPhone 6s and 6s Plus. As expected, the device received a new display with 3D Touch, which is a much more advanced version of Force Touch. A new generation of display and methods of interaction with him is really amazing — “three-dimensional pressing” was not just “long tap”. 3D Touch allows you to distinguish between pressing power on the display, which makes many functions quicker and more convenient. In addition, the phone responds to every gesture slight tactile response through the use of a new actuator called the taptic Engine.

Change, of course, also affected the performance of the devices. In the new iPhone A9 processor with 64-bit architecture. Its speed is up to 70% higher than the previous generation. 90% promise and growth charts. As for photography, new items feature, improved 12-megapixel main camera that can shoot video in 4K.

Added a new color and hardware “Rose gold” that has long been rumored. In the United States smartphone sales will begin in 2 weeks time, iOS 9 will be officially released on September 16, and the price of the new contract did not change.