Newsweek magazine was put up for auction Diane Williams of ESCONDIDO, CA, with a starting price of $ 1,000.

Williams got an autograph in October 1988 at the presentation of the NeXT computer. At the time she worked at Lotus Development Corp and was interested in buying batches of computers. 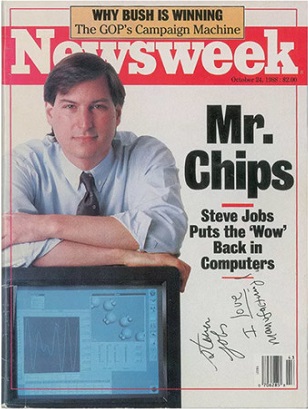 Steve jobs came down and sat at the table next to her. The girl asked him to sign a copy of Newsweek magazine, which tells the history of jobs in the computer industry. Steve said: “I don’t do autographs.” According to Williams, she asked him to write “something from the heart”. Jobs smiled, grabbed a journal and wrote: “I love manufacturing,” said “love” and added his signature.

Jobs did not like to sign autographs and, as you know, refused to sign items for fans. Autographs of technical gurus are extremely rare. Especially valuable are such memorabilia as Newsweek magazine.