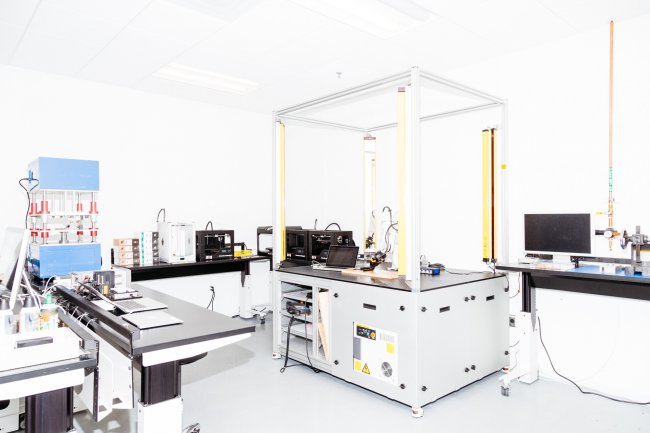 Apple is known worldwide not only bold ideas front of the jewelry store the fate of various sectors of electronic industry. Cupertinos giant is one of the most secretive companies on the planet, and despite regular leaks caused Asian suppliers, the atmosphere of secrecy here would envy even the military. But recently Apple made a feast of unprecedented generosity, and the journalists managed to get into one of the most mysterious laboratories Corporation. What lurks within its depths ?

Among dedicated the object in question, called Valko Parkway. In this seemingly nondescript building, located not far from the Apple headquarters in Cupertino, is the most important research center of “Apple” of the Corporation. It is here, equipped with the latest technology rooms are created and tested new keyboard, trackpad and mouse, during the years of its existence turned into examples of engineering art.

The view alone from laboratories any technology enthusiast will feel at least a surge of adrenaline. Until recently the entrance to outsiders was strictly forbidden, however, to add “flavor” to the release of stunning new iMac, whether to show off the transparency with which the company now operates in Cupertino (for the second time after a trial to the fitness centre) lifted the veil and allowed the journalists Backchannel to get into the Holy of holies. So, get ready for the unknown: the journey into the bowels of the secret object of Apple begins.

First in the list is visited the laboratory where the tests will be not only accessories, but also those for whom they are intended. In order to assess the comfort and usability of new devices, inquiring minds explore their impact on people with a system fixed on the body of the sensor. As noted by Kate Bergeron, Vice-President of Apple’s development ecosystem, the testing is conducted in a wide range of subjects.

We monitor muscle activity and fatigue, as well as sound features keyboards of all kinds, — shares the secrets of Kate actually responsible for all of the input devices with the “Apple” logo. — Accuracy set, in particular the rate of habituation of users to new models of keyboards is another feature, which is based on our research. 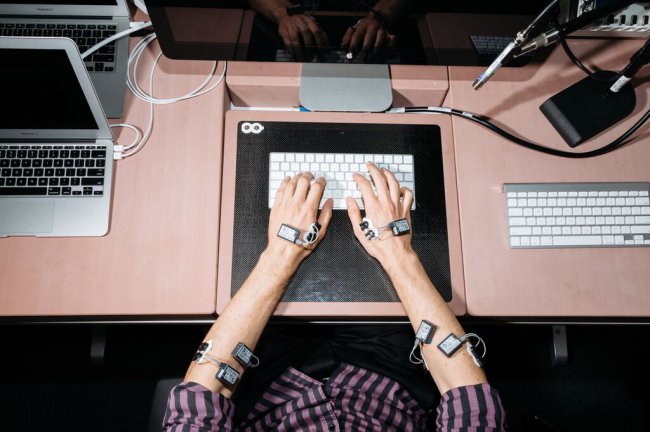 Of course, the team have something to be proud of: according to Bergeron, the subjects deal with the new keyboards are significantly faster.

In another room, stuffed to the eyeballs specially modified Apple industrial equipment, is another step: checking of products for compliance with cupertinos high quality standards. Here the ball is ruled by robots: each new product undergoes a separate “machine” to test which tests its reliability and dependability. Upon completion of primary data collection, their analysis is conducted by special software. Of course, the main task one way or another rests on the staff: Kate notes that the team has to perform a great work.

As an example, test equipment can result in just such a car equipped similar to a screwdriver tool to test keyboard. As Bergeron notes, each shipped copy is checked at five points in all corners and the center. 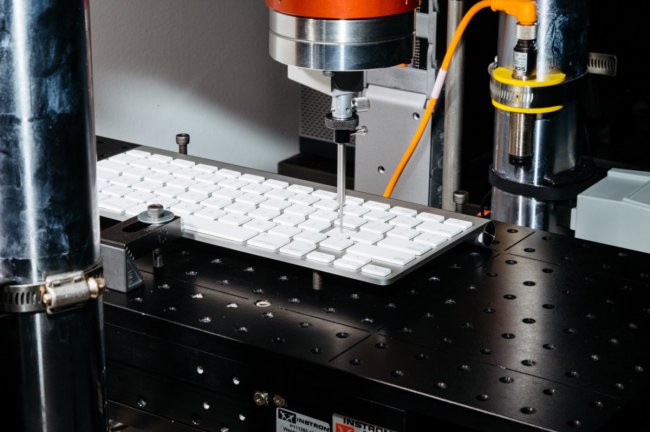 But that’s not all: another robot checks the Apple keyboard is literally on the wear — with five million clicks. In addition to the experimental tests and pass the commercial copies. The combination of these actions leads to the fact that the laboratory is open year-round, almost non-stop. 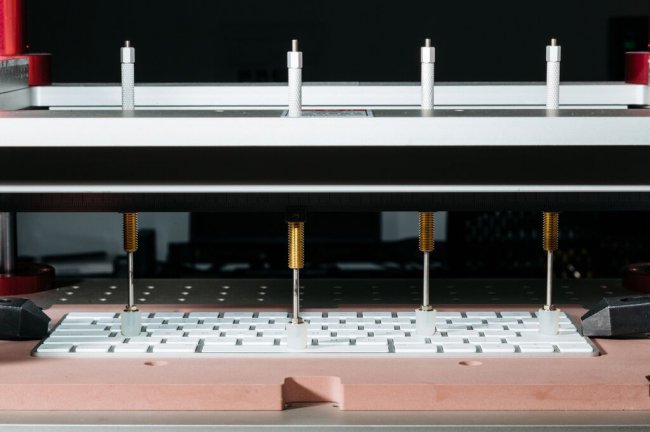 And, of course, in such a modern design facility simply can not be fashionable now a 3D printer. Set here MakerBot helps the team to create, for example, a special holder is used to achieve optimum angles when testing devices. The test mice and trackpads are made by mechanical assistants on a variety of surfaces, from the usual metal and glass to wood and even concrete.

We try to understand what forms show better in different settings, says Kate. 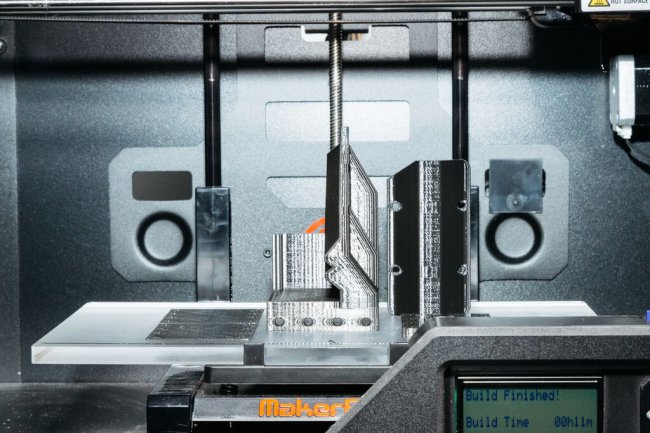 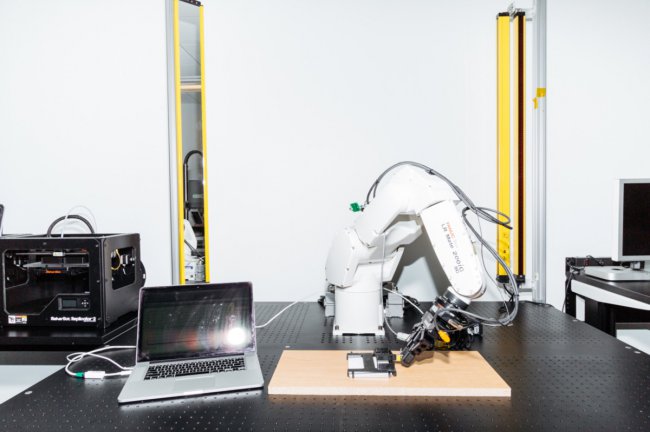 Another senior Manager, John Ternus responsible, in addition to ecosystem, several other areas of the company Mac, iPad and solutions in the field of audio equipment, shares his experience on developing the best products.

We repeated the study just to ensure a “correct” push, says John. — The goal is simple: to give the user the most “magical” feeling.

Each new keyboard is truly a challenge to the engineering skills of the laboratory staff. For different devices, create separate mechanisms keys, and in order to obtain objective information “from the field”, the prototypes implemented on a larger scale. Such specimens can be seen if you look carefully on one of the tables in the center. 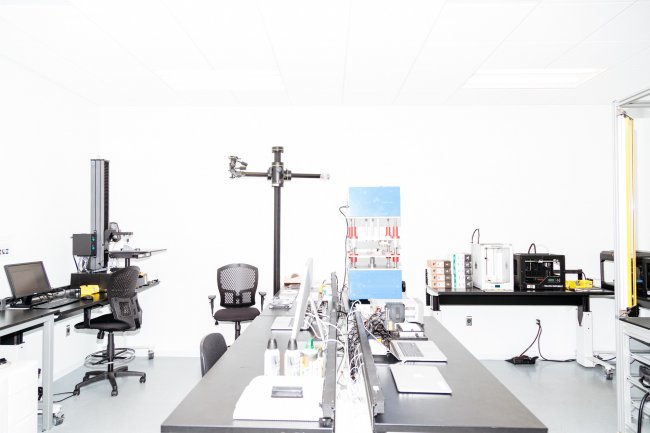 Another test, once again demonstrating the famous Apple attention to detail, is the “acoustic room”. No, you guessed right: here, in a specially isolated chamber indeed assessed not only the noise but also the sound input devices when working with them. Especially the latest development of the Corporation — new keyboard Magic Keyboard.

To get the proper sensations, it is necessary to pay great attention to the sound characteristics, — says Ternus. — Due to design differences between the test and commercial samples, the fine-tuning of each keyboard requires detailed checks and a fair amount of efforts. For example, when we did not like the sound of keys in one embodiment, we have replaced the material from which was manufactured the mechanism. Thus we were able to achieve a more pleasant sound. 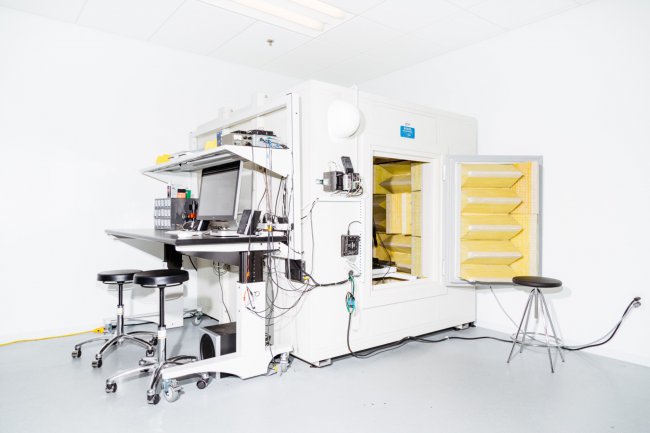 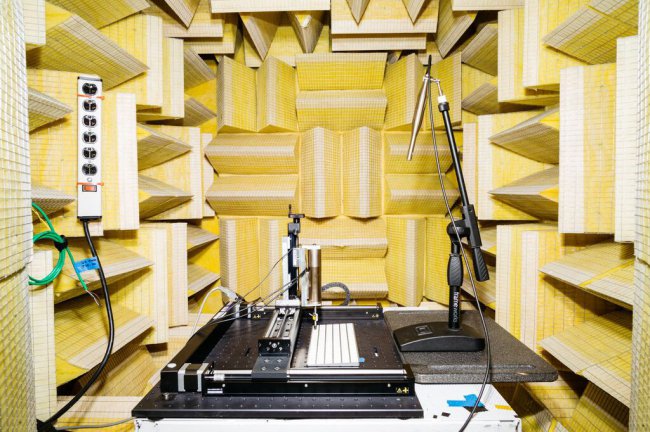 A similar story happened with the new trackpad: the staff tried to bring to perfection all the possible types of touches and sounds. The final word in these tests remained not after the car: in the best traditions of engineering the premium-class readings on the measuring instruments were compared with the feelings of the team members.

We gathered in a separate room, and really music of us involved in this selection of music, shares his impressions of Turnus. — The final decision was made solely by the answer to the question: what do you think about this sound?

As you can see, perfectionism in Cupertino not only has not disappeared anywhere, but continues to be a driving force in the development of the Corporation. Let’s hope that in the future the company is expecting even greater accomplishments as important in the products and in the most unobtrusive details. Because in the end, of little things add up a famous Apple user experience.