Users have experienced serious problems after upgrading to iOS 11.0.1

A week after the release of iOS 11, Apple released the iOS update 11.0.1, which corrected a number of errors, but users are still dissatisfied, according to ZDNet. 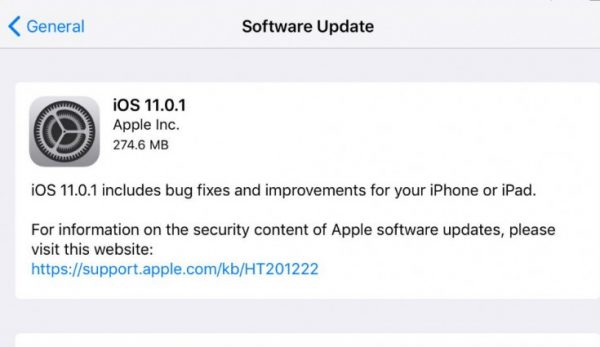 Users complain that the iOS update 11.0.1 not only fix existing problems but also brings new. Basically all dissatisfied with low autonomy, problems connecting to Wi-Fi and Bluetooth and a bad rendering of the animation. Some users claim that unstable operating system made their device unusable.

The user metricrules described on Reddit problems that he could detect on the iPhone 6s after upgrading to iOS 11:

Bugs iOS 11 almost turned my phone into a brick. Spotify is not displayed on the lock screen. Have to restart the device to solve this problem, but after a few hours it repeats. Alarm not working when phone is in silent mode. Volume adjustment not working on the lock screen. Some apps don’t open properly, the splash screen can take 20 seconds. The buttons on the EarPods work with interruptions.

The phone starts to slow down itself and reboot more than 10 times a day. On iOS 11.0.1 Frisians became more than that of iOS 11.

Anyone have problems with the Wi-Fi connection? My iPhone 6 connects to wifi only if it is next to the router. If you back up a bit, the signal is lost. Tried to connect to two networks, always the same.

Like a lot of complaints. Apple has seeded the first beta of iOS 11.1 to developers. Beta testers claim that the company has fixed some of the problems, for example, by connecting Outlook mail and Exchange.