Users in social networks believe video blogger TechRax, who advised to drill a hole in the iPhone 7 to make it a 3.5 mm headphone Jack. The video was posted on his YouTube channel and currently has almost 10 million views. 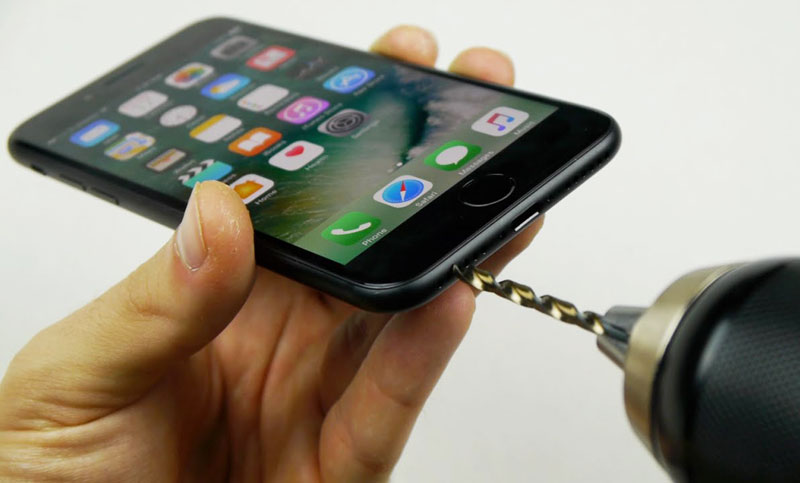 The blogger said that under the body of the iPhone 7 is a hidden audio port, which can be reached by drilling a hole in the bottom face. The author of the smartphone video clamped in a vise and drilled in its Foundation hole.

It would seem that this is just a joke. But who would have thought that this “manual” used by some owners of the iPhone 7, which review began to accuse the author of having their smartphone stopped working after this procedure. Judging by the abundance of dislikes allowed for the video, followed the instructions many users have broken their gadgets.

“I did everything as shown in the video, and now I have a broken screen and no phone. I made the biggest mistake of your life by watching this video” complained one user.

“My friend said that he got to do it, but my iPhone does not turn on after I drilled a hole for headphones,” wrote another.

“I made sure to take the drill to 3.5 mm, so my mistake there. Why the smartphone won’t turn on? Someone else has the same problem?”.

There are those who still have doubts, but resolute: “I Have no grip, you can hold the smartphone in one hand and drilling a hole? I just don’t want to break the phone. Thank you for your advice”.

Some users in the comments to the video decided to “help” poor people “good” advice:

“Some after the procedure was having problems, so here’s a tip. The author of the video did not specify that after the drilling you need to clear the new connector. For this you need to place the smartphone in the soapy water for 15 minutes to remove all metal shavings. Then shake the smartphone. I hope someone will help.”

“If you want me to help to bring back your smartphone to life, simply reply to this comment, putting the credit card number, expiration date and three digits on the reverse side.

In mid-September, a similar Council was published in one of the communities of “Vkontakte”. Users of the social network appreciated the joke and hoped that some lover of Apple I shall try to follow the listed advice.

iPhone 7 and iPhone 7 Plus are deprived of a 3.5 mm headphone Jack which is now connected through the Lightning port. The iPhone comes complete with an adapter for standard headphones.