Users of social networks found a man inside the robot Boris

In one of the broadcasts of the TV channel “Russia 24” aired a story about a robot Boris, who knows how to dance and solve math problems. How do I find the users of social networks, Boris was not a robot but a real person. 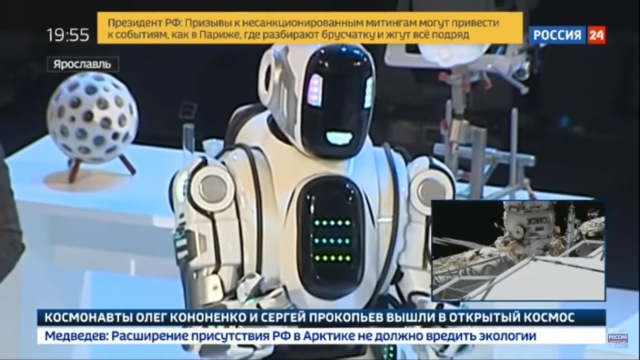 Robot Boris was presented to the public on 11 December 2018 in the framework of all-Russian forum “Proektoriya”. Among the guests was also the President of the Russian Federation Vladimir Putin. Particular emphasis was placed on new technologies, in particular on the robot Boris.

The TV channel “Russia 24” Boris is not only a fashion performed a dance to the song Little Big “Skibidi”, but decided a few math problems. The roller channel has caused distrust on the part of users of social networks. As it turned out, not in vain: on freeze-frames of the plot, they noticed that Boris is actually a man dressed in a robot costume. This view confirmed the details, noticed by bloggers, in particular, unusual robots movements, the absence of hinges and probably pre-prepared speech, which somehow sounded not from the robot, and loudspeakers.

Despite this, the journalists of the TV channel was not explained to the audience that the robot is essentially only the suit and the element of the masquerade. Furthermore, throughout the release particular emphasis on the fact that the robot is real, and his ability – an example of development of Russian technologies and artificial intelligence systems.