Videofact: hundreds of people on red square, lined up for the iPhone 7

More than three hundred people lined up at the GUM shopping centre on red square in Moscow in anticipation of the start of sales of iPhone 7 and iPhone 7 Plus, which will start in Russia. It is reported by journalist Dmitry Smirnov. “Russia on the brink of economic collapse: two hours prior to the opening of Gum, turn to Nikol for the iPhone 7”? – he wrote in his Twitter. 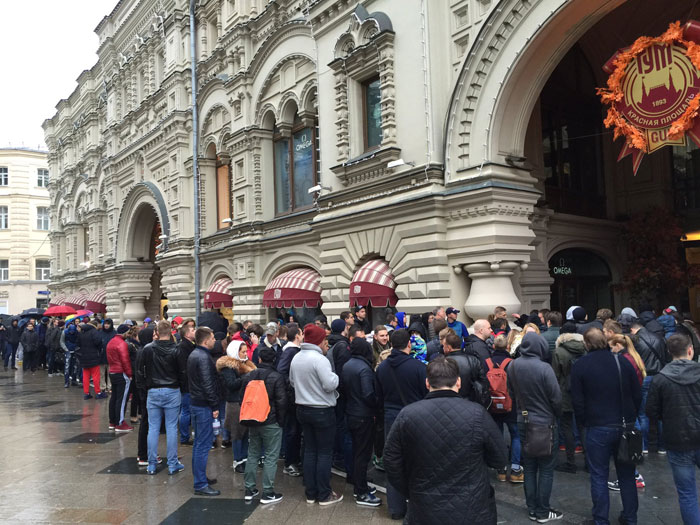 Most loyal iPhone fans standing at the doors of the main Department store of Moscow and Russia from 20:00 yesterday. Last night the buyers have organized themselves and built the list who has ceased to complete, when the number of applicants has exceeded 230, then begins living place. By eight o’clock it was already more than 300 people.

The line starts at the entrance of GUM on Nikolskaya street and turns on vetoshny lane. Store employees handed out standing in line buyers paper wristbands, which will sell phones, when the store opens at 10 am.

Buy iPhone 7 in offline points of sale, among which the retail networks of mobile operators of MTS, “MegaFon” and “Beeline”, as well as the largest retailers of electronics and appliances. In addition, the smartphone is available for order online.

The queue for IPhone7 in GUM two hours before the opening: “I stand 12 hours a night, I three hundred the second, very satisfied” pic.twitter.com/lWbzgJujOX