Wearable electronics — where, who and why?36 comments

The trend of wearable gadgets has rapidly evolved from a brash newcomer in the frequenter of the modern industry. All the fitness bracelets, smart watches and other the new cohort of wrist aides continue to walk on the planet, but since its inception skeptics worried about the same thing. It seems that the German researchers are finally ready to answer the question: who did it still need?

An interesting poll recently conducted by the organization Fittkau & Maass involved in market research. Marketers surveyed nearly seven thousand people to find out how a typical user of the smart watch and popular fitness bracelets. It turned out that among the lovers of wearable devices are not only the usual gender segregated — 70 percent of customers hours are men and almost half of those bracelets women, but much more interesting features. 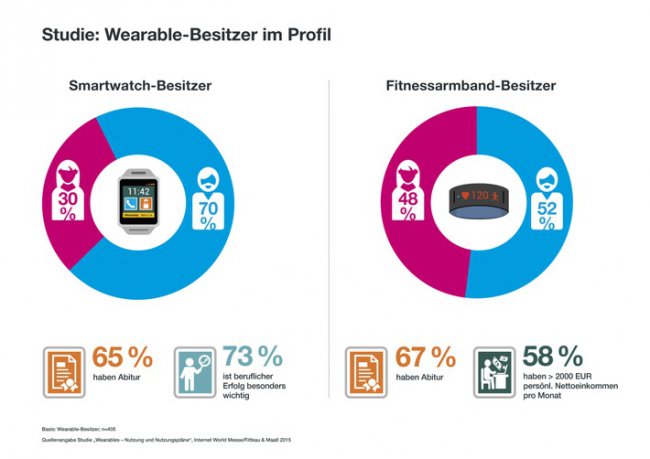 The diagrams above shows a small infographic that reflects the composition of the audience of wearable devices. In addition to the above gender differences, the researchers found that the majority of users are educated, purposeful and very conscious in career matters, and two thirds of them can boast a very solid monthly income. The average age of the typical buyer ranges from twenty to forty years.

With regard to patterns of usage, the first place traditionally is health: more than half of all respondents believe the primary task of portable gadgets fitness tracking and tracing of medical indications. Among other important functions, which is clearly expressed for about 40 percent of respondents, it is worth noting the timely receipt of notifications of SMS, email and various services messaging. The favorites of users and information about weather, traffic jams and just incoming calls.

Despite the growing popularity of such solutions, various network battles and disputes about them are unlikely to abate in the near future, a significant portion of the audience continues to be enthusiastic. Remember the concept of “the most personal device”, which was in positioning the Apple Watch: to decide whether one or another wearable gadget, every user definitely have for yourself. Anyway, appreciate the advantages of this technique in full will really help only a “personal communication”.

According to the materials Presseportal