What would Steve jobs if Apple was headed in 2016

Since the legendary Steve jobs is not alive, it is easy to speculate that he would have taken if, for example, suddenly returned to head Apple in the summer of 2016. However, experts still from time to time to discuss this topic. My opinion on this matter shared the journalist Joe Wilcox. 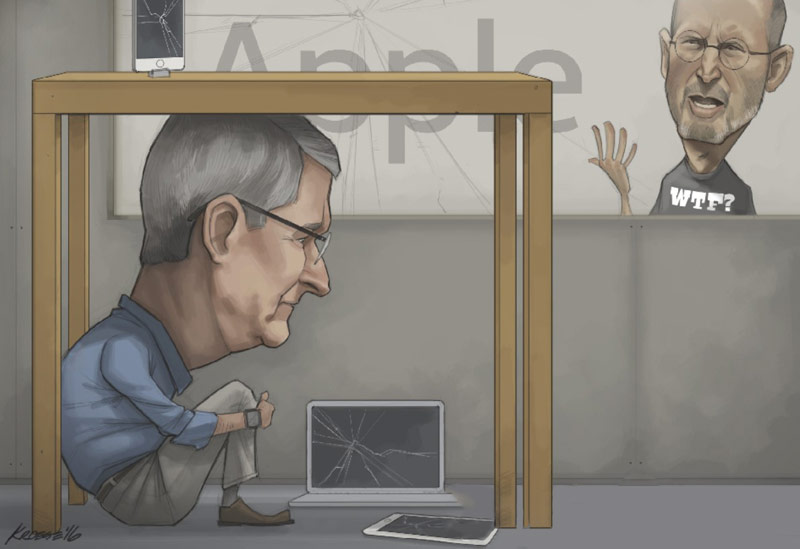 1. Killed MacBook Air after the release of the MacBook

Yes, to remove from the product line of successful products to make way for even more successful, it was quite a typical move for jobs.

He did so in 2005, when he suddenly announced the termination of production of the most successful company player — the iPod Mini. The decision of Steve jobs shocked many fans of the company, but soon it already nobody remembered. Indeed, instead of the iPod Mini, the company began to sell the very successful iPod Nano.

Today, the new MacBook remains in the shadows a familiar MacBook Air. Both models are largely designed for the same target audience. Air is more established and familiar brand. He does give the MacBook to turn around and gain popularity.

This is particularly noticeable now after the second generation MacBook got a more productive “iron”.

The same logic could have changed the strategy of Apple smartphones with larger screen sizes.

Jobs was a fierce perfectionist. In the era of inception of Android, when the diagonal screen high-end devices from Samsung, HTC and Motorola was already better than the iPhone (3.7 V-4 vs 3.5 inches), jobs has released a promotional video, which demonstrated how much more convenient to work with a smartphone that can be operated with one hand.

The last iPhone was “five” with 4-inch screen. In 2014, Apple delivered the new flagships with screen sizes of 4.7 (iPhone 6) and 5.5 inch (iPhone 6 Plus). It was a response to the dominant trend of phablets, Samsung generated.

At the same time, the company is not removed from your assortment of the extremely popular iPhone 5s, which fell and accounted for the lion’s share of sales of smartphones of the company.

As a result, the “large” iPhone sold well, but “ate” a large chunk of sales of iPad tablets.

Jobs would not allow it, says analyst. He either would have continued to stick to their guns, insisting that the smartphone needs to be small screen size, and large screens — the prerogative of the tablets. Or, completely refused from small iPhone and iPad.

He would have left a couple of products — iPhone (with a diagonal of 4.7-5 inches) and iPad (9.7 inches). And this bunch, according to some experts would be selling great. 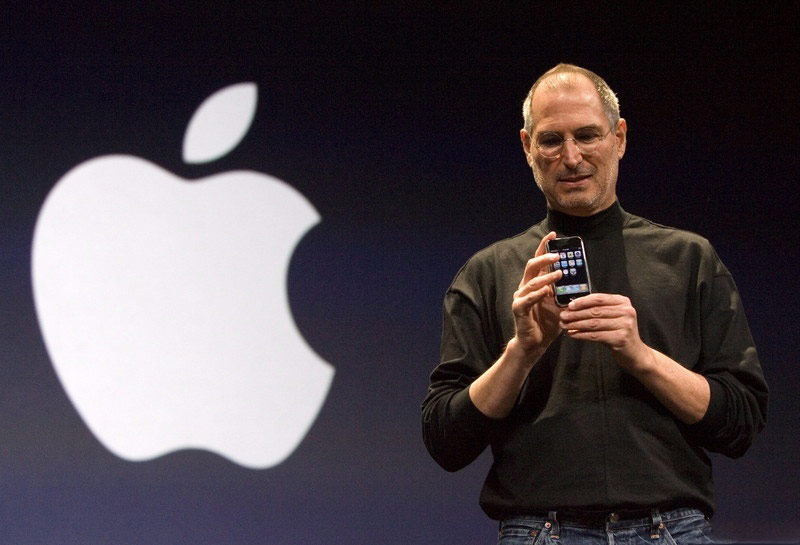 The complexity of the current line of Apple products would bring jobs into a rage. He was a supporter of crystal clarity. When Jobs ‘ company was one smartphone, one tablet, a couple of varieties of players, and three models of laptops with very clear differences (cheap plastic MacBook for beginners, expensive MacBook Pro for serious work and expensive portable MacBook Air).

The range of smartphones was diluted except that selling last year’s model at a reduced price. Jobs would never allow the simultaneous existence in the line of smartphones the three current models, not counting the widespread sale of “recovered” the old models, the expert believes. Would not allow the existence of parallel MacBook and MacBook Air.

And certainly when you Jobs there would be in selling direct 4 tablets, konkursy directly with each other.

Jobs wouldn’t release the Apple Watch, which cook has released their 2014 year, I’m sure Wilcox.

Smart watches have become the first major product that was developed after the departure of Steve jobs, and entirely without his participation. And this is noticeable. Jobs would have done things differently.

He tried with every new product to offer users a new idea. In fact, the very idea of a wearable gadget (not necessarily hours) jobs was born, when he found out he had cancer.

Jobs believed that medicine in USA is in the stone age and was sure that the gadgets are able to revolutionize how people will make diagnoses and monitor treatment.

Apple has repeatedly stated that the release of the Apple Watch was associated with a desire to develop this idea and bring to market a device that facilitates the monitoring of health.

However, in reality, the launch of the Apple Watch looked like an attempt “Spud” market, which formed its first watch companies such as Samsung and Motorola, as well as numerous manufacturers of fitness trackers.

The subject of health looked secondary in the presentation hours, which was conducted by the cook. And in the minds of most users of the Apple Watch is the first wearable gadget for call notifications, games, etc. 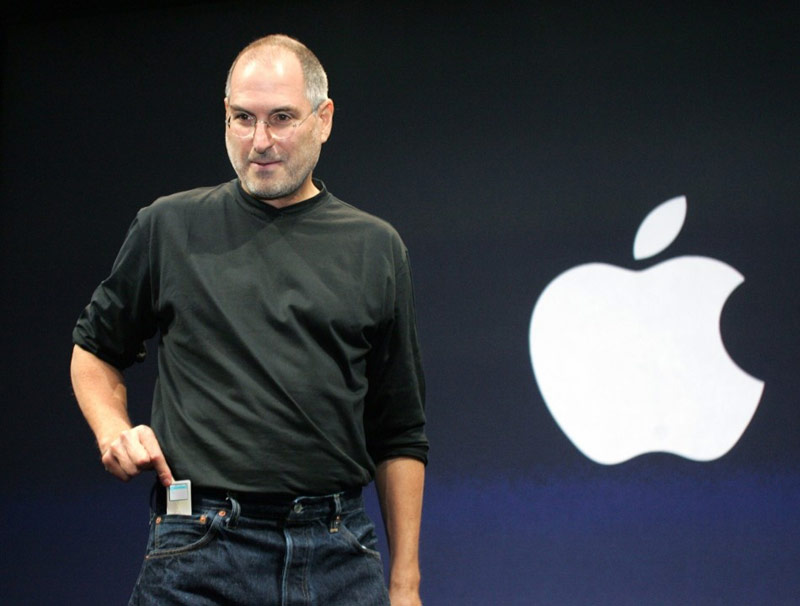 Most likely, jobs would have different functionality from Apple Watch is still at the development stage.

Or, differently put the emphasis on the presentation hours, creating the myth of new devices, without which modern man can not do.

Remember the presentation of the iPod nano (which jobs, took out his jeans, “have you ever thought about what this small pocket?”), or iPhone (“we came up with three in one device, phone, player and device for Internet access”), MacBook Air (which jobs brought to the stage in office, envelope paper).

Fans even made a video of the old “cuts” jobs, trying to imagine how Steve would have spent a presentation of smart watches.

5. We would continue to play the role of David and would not Goliath

In the late 1990s, Joe Wilcox wrote in his blog post titled “Why Apple will always win”. He argued that Apple under the management of Steve jobs professes tactics that helped David beat Goliath in the famous biblical story.

Its approval by the journalist based on the research of Professor Boston University Ivan Arreguin-Tofta about “asymmetric tactics”. Such tactics means changing the rules of the game that allows seemingly weaker opponents to defeat the obviously more powerful. Huge Goliath, clad in armor and with heavy weapons, did not expect that the frail young man without armor will definitely throw a stone at him.

Similarly, the jobs have always achieved success, moving away from a direct confrontation with the enemy and the changing rules of the game, claimed Wilcox. “Apple does not play by the rules, it invents its own”, – stated the analyst. Even the famous slogan of Apple “Think different” has always been a reflection of this worldview.

Jobs couldn’t beat IBM in the 1980s, if I tried to clone the IBM PC, as did Compaq and other manufacturers. Instead, he took a chance and released the Macintosh with a graphical interface.

Jobs couldn’t beat Sony in the fight for market, if also began to release music on CDs. Instead, he launched a service for selling music files over the Internet.

Jobs would not have been able to once again beat Sony, this time on the market of portable laptops, if they hadn’t taken the decision to abandon the DVD drive in the MacBook Air. It is the desire at all costs to cram the drive, limiting the weight and thickness in General excellent compact laptops Sony VAIO TT and TZ.

In each of these stories, “David” jobs was against a Goliath – a large successful company resting on its laurels. And the success of “David” was due to the fact that all other competitors “Goliath” themselves sought to become “Goliaths”. We have tried to catch the leader, playing by the rules of the leader.

Today Apple under Tim cook itself has turned into such a Goliath, says Wilcox.

The company for many years set records of sales and profits, has become the industry leader. Cook and competes with other major players exclusively as Goliath’s own weapon. How else to regard the release of smartphones with a big diagonal of the screen in response to the Korean phablets. The output is devoid of the “big” ideas of the Apple Watch in response to the Motorola and Samsung gadgets.

15 years after his optimistic thesis that “Apple will always win,” Wilcox took a different position “has Apple lost its way”. Would have made jobs such a radical change in the DNA of the company he established – the question is rhetorical, the journalist concluded.