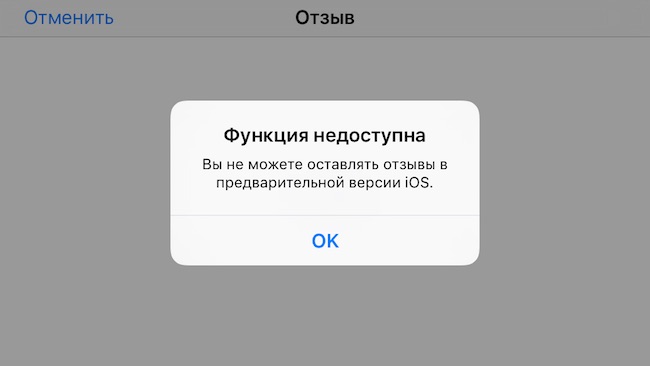 “On iOS 9 doesn’t work!”, “Bethke’s out!”, “Developed*****!” such reviews up to this point have repeatedly appeared in the App Store, causing essential irritation from the makers of specific apps. And now Apple has decided to look into this situation and has taken a step that many expected.

The company’s decision is very simple and clear: starting today, users of the beta versions of iOS simply will not be able to leave App Store reviews for the app. The fact is that on beta versions, not all native apps work perfect, what can we say about third-party products. Since the final version is not released yet, the developers still have time to ensure the smooth operation of their apps in the new iOS version. However, this did not prevent beta-testers who encountered the problems, to report on the latest publicly.

Of course, this injustice could not help but feel indignant not to blame developers who are in an empty place received negative public feedback that was negatively reflected not only on the ranking of programs, but also on the number of downloads. In this context, the Apple looks quite logical and correct, especially if to consider that recently the beta version can be installed not only registered developers, but everyone. Perhaps this can be called another way to clearly explain rushing to use new firmware version that is crude and not fully functional system they are installing at your own risk.