Why iMessage will never appear on Android

Before the start of WWDC 2017 hours. In the network, a lot of rumors about software and hardware innovations that Apple will unveil at this event. In October last year there was quite an interesting leak. John Gruber reported, citing its own sources, the company is testing a version of iMessage for Android. Apple has frequently discussed ideas that ultimately are not implemented. There are several reasons why corporate instant messenger Apple will not available on Android.

It will not bring income

Apple never goes to the third-party ecosystem if it is not profitable. When Apple released iTunes for Windows, its aim was to convince millions of users to buy an iPod. And it was a success. She has just released an Android version of the app Apple Music, which brings her in direct income from subscriptions. In addition, it helps Apple music service to compete with Spotify.

iMessage on Android will not bring big profits. There are sets of stickers that can be purchased in the App Store, but how will this work on Android? Now “Messages” are almost a separate platform where many developers focus. Transfer app for Android is unprofitable and pointless.

iMessage is a great app, but it is unlikely it is the cause that keeps users from switching from iOS to Android.

Now, almost all popular apps are available in App Store and in Google Play: email, social networks, calendars, sports programs, etc Service iMessage is unique to Apple devices. One of its advantages is the ability to send messages with Mac, but for most users it does not really matter.

Imagine that Apple released iMessage for Android, who download? Why Android users another instant messenger? Sticker packs now available almost in all social networks, so this function does not emit the “Messages” among peers. Even if we assume that this is one of the reasons to switch to Apple device, why would the company make such a useful app available on a competitive platform? To lure users to their OS? But why would anyone buy an iPhone if you have one of the best apps you can install on an Android device? 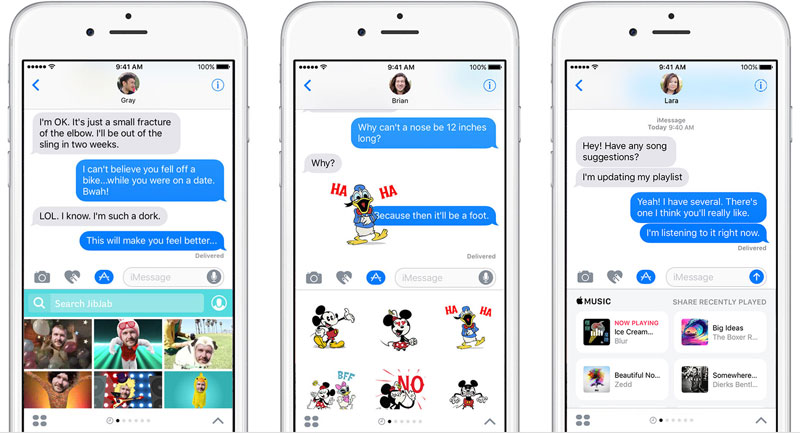 The only convincing argument in favor of the release of iMessage for Android is trying to attract new users to Apple Pay. A month before WWDC 2016 appeared information that Apple will add in the “Messages” the ability to transfer money to other users.

To transfer and of payment, Apple Pay uses a fingerprint sensor Touch ID. The question arises: how Android users will confirm the payment? In their products Apple pays special attention to security, and it is unlikely she will be able to trust the security of their system to other manufacturers.