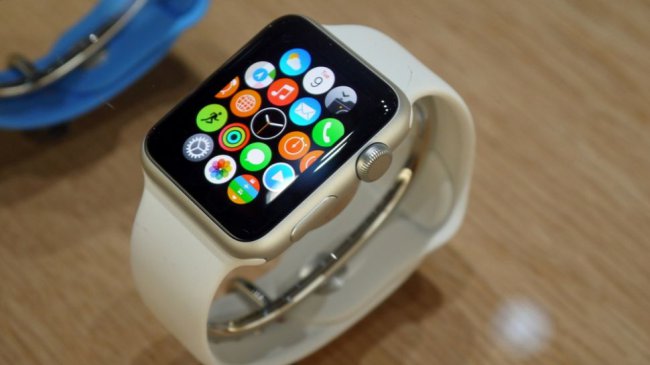 Yesterday’s financial report by Apple Inc. have left investors very positive impression, because the company’s net profit for the quarter has increased very significantly. Tim cook with his characteristic pride downright boastful talked about the successes of the Corporation, but rather indirectly mentioned the Apple Watch. Apparently, they are not in the best way.

According to the CEO of Apple, sales of the smart watch has surpassed all expectations and enjoyed world wide popularity. In addition, in the previous quarter Apple Watch have been sold, allegedly by number about 2.5 million copies. The same was reported by analysts Slice, putting in on 200,000 units sold per day. However, soon the dynamics dramatically decreased and was 10 times less.

What do we see today? Each company’s product including iPhone, iPad, and Mac, has its own statistics and assigned to a separate column for easy counting their sales. But not Apple Watch. Such a significant and anticipated the revolutionary device was “mixed” with the indices of the iPod, Apple TV and various accessories like headphones Beats. All this “Apple” of the brethren brought the manufacturer in a total of 3.05 billion dollars, which accounted for only 6% of the total profit. Frankly, it’s not much. But what is the problem?

Analysts believe that the reason for the low popularity of the Apple Watch was, oddly enough, the name. The usual series of iOS devices, reflecting the uniqueness and innovation was rejected and for some reason considered inadequate for hours. Customer-oriented instead of prefix “i” was used a self-centered Apple. Users have not forgiven the company for this decision, says Rob Enderle, senior analyst and head of the concern Anderl Groups.

Funny? Possible. In any case, this guess is more like a mantra or lamentations are superstitious. Most likely, the Apple Watch turned out to be trivial expensive even for most fans of “Apple” technique. Whereas people in the majority not accustomed to spend hours over 200 dollars, Apple is worth one and a half times more expensive for the model in the minimal configuration. In addition, not all came to the understanding that another gadget will certainly be on hand. Smartphones, tablets, laptops, iPods, desktops, and now even smart watches. But, actually, why so many? The benefits of notifications on the wrist is highly questionable, and need to charge them daily, that does not fit with the concept “convenient” gadget. More than half versed in modern technology users remain Apple Watch iPhone with smaller screen, which for some reason were threaded strap.

The situation is unlikely to change dramatically in the next couple of years. Even despite the apparent popularity of the Apple Watch and admiring reviews of users, the category of smart watches will remain a privilege for geeks and fanboev. Definitely need to change something. And try to answer yourself.