Due to the small size of smartphones, they are often underestimated. Start desktop on iPhone – example of the power of these devices, Jules Hacking video proof. 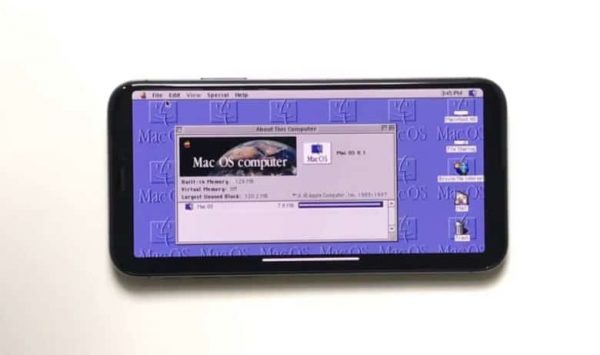 Mac OS 8.1 was released 1998, is now outdated OS and was designed to work with 40 MHz processors. However, many may be surprised that it works on the actual Apple flagship.

However, you must keep in mind that on the iPhone with support for ARM appears to emulate a completely different processor architecture 680 × 0. Thus, the device includes a program that emulates a processor that runs the operating system. In turn, she could run applications written for this processor architecture. (Example: English speakers who are translating in real time the French, the Chinese).

And the iPhone does it very well. Mac OS loads a bit slow, but it was typical of Macintosh computers of the time. After that, the performance of the emulated device good. This allows you to run on Mac OS 8.1 Warcraft II and Sim City 2000. Games look and work very well, judging by the video.

Of course, all demonstrated Hacking Jules was not created for practical use. This is just an example of the capabilities of modern devices. To launch the emulator the normal user will not be able – Apple forbids the appearance of such projects in the App Store. Maybe he will be available to jailbreakers.