Ignorance of the law is, unfortunately, not exempt from having to pay. From the first day of 2019, entered into force new rules of entry to Russia of foreign goods. People who prefer to save on purchases and purchase gadgets in foreign stores, are now faced with the problem. In a bad situation came a tourist who bought a MacBook in Finland, but could not freely bring it home. 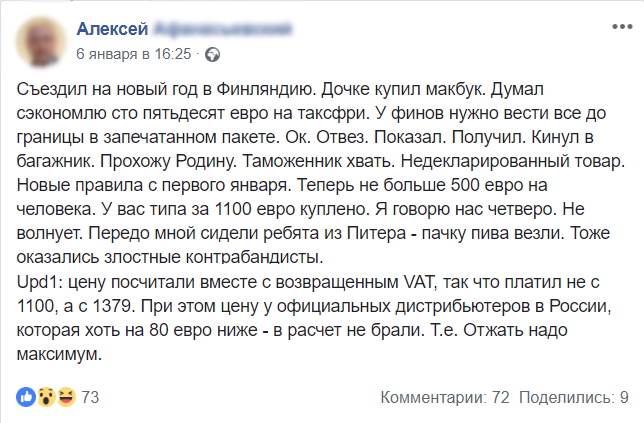 As it was before:

Traveling by train or car, it was possible to import into Russia of imported goods up to 50 kg and costing up to €1500.

From 1 January 2019 entered into force new rules regarding import of foreign goods. This was announced in November 2018. Without payment of customs duties across the border can now bring in goods for personal use up to the equivalent of €500 and weighing up to 25 kg. the New rules are relevant for all countries-participants of the Customs Union.

Restrictions on goods entering the country by land transport (car, train)as well as international parcels, including online stores. If you prefer planes, unpleasant surprises are not threatening: the limit remains at €10,000 and 50 kg.

How to avoid problems at the border

1. If a thing is purchased in a foreign store:

You first need to throw away the box, hide checks, and to remove from the product tag. In other words, to pretend that the goods purchased from a foreign store, and for some time used by you for personal purposes. You may get lucky and customs clearance without payment of duty: regulations of the Russian Federation is allowed to pay for personal items. But customs officers can pay attention to the appearance of things. Clearly a new laptop can cause suspicion. And better not to try to carry laptops, smartphones, tablets and other gadgets in more than one instance.

There are some nuances: technically, if you buy an iPhone outside of Russia to make use of them, in the eyes of the customs officer such goods still will not be “secondhand”.

“Signs of things used, directly listed in the main normative document, namely, the Decision of the Council of the Eurasian economic Commission No. 107”, — commented the lawyer Polina Sukhova. “It is generally accepted (traditional) practice of using baggage of a subject in transit and (or) the destination, including taking into account seasonality, purpose of visit, mode of transport, frequency of crossing the customs border of the Eurasian economic Union; signs of wear and tear (including scratches, dents, other mechanical damage), washing, and other uses; the lack of tags, labels, labels, primary packaging, including roaming separately, excluding packaging, damaged in a way that eliminates the restoration of the original state cost-effective way; the import unit or that quantity necessary for conventional (traditional) practice of use of such goods, including taking into account seasonality, purpose of visit, mode of transport, the objective necessity of the route and (or) destination.”

Thus our question is whether a subject’s right to purchase signs directly at the customs office, the lawyer replied in the negative:

“If you start to unpack the laptop, looking into the eyes of the customs officer, the situation could be even worse. Customs officer can provide evidence of these actions constitute an administrative offense, to place an item on the warehouse of temporary storage, to appoint the examination, which will establish the place and the time of sale, the serial number of the device and its results further impose the violator a fine in the case of an administrative pravonarushenii as if when crossing the customs border of the Customs Union, the citizen is not declared in the statutory form, the goods transported through the customs border of the Customs Union and subject to mandatory written Declaration, thereby, he committed an administrative offence responsibility for which is provided p. 1. article 16.2. Of The Administrative Code Of Russia.”

Moreover, the cost of your gadget customs officers have the right to determine not according to the received information and based on the value specified in the customs directory. Thus, the attempt to turn a new laptop into the old directly at customs can result in the fact that it will cost you several times more expensive.

2. If the item purchased on the territory of Russia:

If you buy expensive equipment or things in Russia, leaving the country, it is better to declare below upon entry to avoid unnecessary questions.

In favor of the law say that one is aimed primarily at combating illegal trade, and that tourists to involve in the struggle with the shuttles was not planned. However, its better to be alert in order to avoid unnecessary trouble.